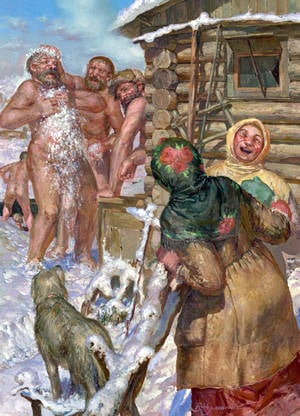 Recently, in certain circles, it has become customary to exaggerate the topic of how Russian civilization was initially already inferior in its development to European civilization. The term “unwashed Russia” is exploited with considerable ecstasy, and people who often use it, thus try to justify their intractable craving for Western liberalism.
It is obvious that these people themselves, who are sure of the "unwashedness" of Russia and Russia, are extremely superficially familiar with the course stories. And the story suggests that the very “civilized Europe” did not even guess about the need for sanitation and hygiene, while in Russia there was a private bath in literally every household. A visit to the bathhouse in Russia was not only a way to achieve hygienic cleanliness by people, but also a real ritual that allows you to cleanse your soul too. No wonder that it was precisely the bathhouse in Russia that was called the place in which evil spirit dwells, since all the spiritual “dirt” after a man’s trip to the steam room remained here.
The construction of the baths was carried out using a fairly simple technology. The classic Russian bath was (and is) a building consisting of two rooms: a waiting room and a steam room itself. In the steam room could stand up to several rows of bath chambers (shelves). In contrast, for example, from the Turkish bath (hammam), in the Russian bath there was no central place for the inclination of visitors. Source: http://www.turkishbath.ru
Both in Russia and in the Ottoman Empire (Turkey), baths were used not only as rooms for washing the bodies. They were also considered as treatment options for many diseases. A person who regularly visited the bath rarely suffered from diseases of the respiratory system, he was avoided by the ailments associated with diseases of the skin, cardiovascular system. The Russian word “bath” is derived from the Greek term “balaneon,” which was later transformed into the Latin version “balneum.”
The famous Wikipedia claims that baths were the norm throughout medieval Europe. However, historians argue that the bath in the current sense of the word existed only in the south of Europe (Italy, Greece, regions of Spain and the south of France) - as a kind of tradition that remained from the time of the Roman Empire. In other regions of Europe, baths were rare. If the bath existed, it was a building in which people with considerable means could wash themselves.
Ctrl Enter
Noticed oshЫbku Highlight text and press. Ctrl + Enter
We are
What caused the death of the first European civilization?