Ten main reasons to learn Russian (according to the University of Florida, USA) 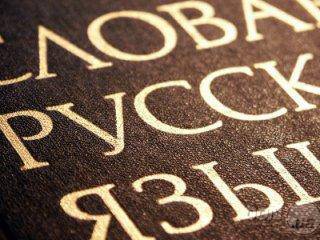 Note: The text is taken from the official site of the University of Florida (the institution where Hunter Thompson and Jim Morrison studied, among other things), for which he was prepared by Professor Ben Rifkin from the College of New Jersey, one of the main educational institutions in the northwest United States. It should be noted that part of the statistics is incorrect (but we did not rule it, because it is a translation), but there are some interesting figures, as well as the perception of modern Russia in the United States. With the traditions of the Great Russian Depression, a bit of white-tooth American positive will not interfere:

2. Russia is a regional power, and it is returning as a global one. Russia organizes alliances with the former Soviet republics: the Customs Union and the Collective Security Treaty Organization. Leading Russian politicians make proposals for the Eurasian Union, which unites the post-Soviet states, with a strategy to cover the economic and security sectors. This is expected to be an incentive for the Russian economy, foreign policy and military influence in the region. Russia also stands guard over its traditional influence in neutral countries and in the countries of the developing world, and continues to spend money on modernizing its armed forces. NASA depends on the Russian Space Agency, since it is necessary to transport astronauts to the International Space Station. Finally, the Russian commodity economy emerged from the global crisis relatively untouched. Energy analysts believe that by 2030, up to 50,% of European natural gas will be Russian.

3. Speak Russian to study the Russian economy. Russia is one of the largest suppliers (if not the largest) of a variety of natural resources and raw materials, including oil, diamonds, gold, copper, manganese, uranium, silver, graphite and platinum. Russia is the second largest steelmaker after Japan, and also has gigantic forest resources. Russia is the largest supplier of natural gas, the third one in terms of oil, and the fourth in coal production. It is estimated that 40% of the world's natural gas reserves are located in Russia. Russia's proven oil reserves are less than only Saudi Arabia, which is the largest oil supplier in the world. For American goods and services, the Russian market is huge. With knowledge of the Russian language, you will be able to work with American firms trading in this thriving market. The state of Florida and Russia are also engaged in business: the total trade turnover between Florida and Russia in 2007 year exceeded 986 million dollars. Russia is in a dozen of countries profitable for business.

4. Russian language is important for science and technology. According to a recent study, the largest number of scientific publications published in English, in second place is Russian. This applies to chemistry, physics, geology, mathematics and biology. There have always been rich scientific traditions in Russia — from Mendeleev to medalists who have recently received the Fields Premium in Mathematics. The Soviet tradition of creating science campuses and academic communities is replaced by a management system supported by government agencies and private sector startups. Innovations in programming, software development and information technology come from Russian government agencies and private companies.

5. Russian is spoken by hundreds of millions of people: the Russian Federation extends over nine time zones and occupies about 1 / 8 parts of all land. This is the largest country in the world, its area is almost twice as large as the American one. The population of Russia is almost 150 of millions of people, which is slightly more than 50% of the population of the former Soviet Union. The number of Russian speakers in the world is 270 million people.

6. Explore one of the most exciting cultures: many of the best traditions of world art were born in Russia. Ballet, theater, cinema, literature, music and the visual arts are only a few of the spheres in which Russians have created great traditions and continue to give outstanding innovators to the world. From George Balanchine to Mikhail Baryshnikov, Sergey Eisenstein to Andrei Tarkovsky, Anton Chekhov to Konstantin Stanislavsky, Fyodor Dostoevsky to Vladimir Sorokin, Shostakovich to Hvorostovsky ... the Russians create masterpieces! And did you know that acquaintance with Russian helps you to perceive the world differently? Those who speak Russian, in which there are more words for light and dark shades of blue, visually distinguish shades of blue.

8. Studying Russian helps you get into programs after undergraduate studies: students who study Russian are more likely to take graduate studies in law schools, business schools, medical universities, and other professional programs.

9. Learners of Russian language build successful careers. Students who have studied the Russian language are working as engineers at the Center for Space Research. Johnson, in banks operating in international markets, in the Peace Corps, in leading audit firms (in Russia and in the USA), in large and small law firms, in Russian, European and American press services, in the State Department, in the Ministry of Commerce The United States, who teach English in Russian schools, work in NGOs such as the Carnegie Foundation for International Peace, the National Center for Foreign Languages, and the US-Russia Business Council. Some of our students who have studied Russian work on the American Council of Teachers of Russian Language and Literature and the American Council on International Studies and Exchanges (IREX) in both the United States and Russia.

10. The success of the University of Florida's Russian language learning program has been proven. The students of our program trained from the US State Department in Moscow, under the Fulbright program, the Pickering program for bachelors of international relations, worked in the Department of Defense, the Military Institute of Foreign Languages, and the US Department of State. To get an honors degree, they took part in research in Moscow libraries and archives, served in the Peace Corps, became Rhodes scholarship recipients, got masters and graduate programs in prestigious universities (among them were Georgetown, Harvard, Indiana University, University of Toronto) . Take part in a program to learn Russian at the University of Florida, and let your example be our next success story!

Ctrl Enter
Noticed oshЫbku Highlight text and press. Ctrl + Enter
We are
About Stalin and KhrushchevWhat you didn't want to know about England
92 comments
Information
Dear reader, to leave comments on the publication, you must to register.