"Dry" in exile. Why is our plane scolded at home and praised in the West?

December 2 2013
150
The recent catastrophe in Kazan made many people ask themselves: why buy foreign airlines, if we have our own new airplanes? The same "Dry Superjet" (SSJ100), for example. 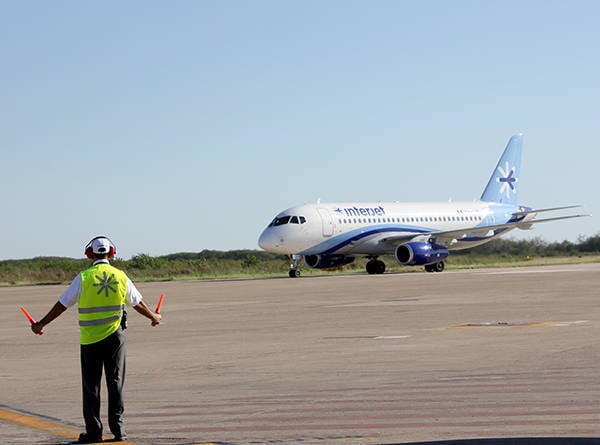 But this proposal was made on the Internet by online hamsters who deride everything Russian, be it buckwheat or Lada-Kalina. As soon as they didn’t bother with the plane, how many evil passages were thrown onto the Net. But okay, hamsters - SSJ100 was also disliked by the leading Russian carriers: they often break down, and therefore fly a little, and in general many of them are closer to foreign technology.

So, the attempt to create a replacement for the Tu-134 and Yak-42, the liner, which was called "the hope of the Russian aviation industry", the first civil aircraft developed in Russia from scratch for the first time since 1991, failed?

From Komsomolsk-on-Amur to Mexico City

News that the Mexican airline Interjet, the country's second largest carrier, decided to buy the Sukhoi Superjet 30 looked quite unexpected. Until now, the Mexicans flew Airbus A320, which the airline already has 39 pieces, and felt pretty good. When they decided to increase the fleet, they were offered their cars by the Brazilian Embraer and the Canadian Bombardier Aerospace, considered to be the leaders of the global market for passenger regional aircraft. But the choice was made in favor of Russia. And the choice is serious: the cost of the contract for the supply of 20 aircraft SSJ100, taking into account the catalog price (35 million dollars) - 700 million dollars, and subject to the transfer of 10 options into solid orders in general will exceed 1 billion dollars.

So Interjet became the first customer of SSJ100 in the Western Hemisphere.

The first "green" aircraft with a tail number 95023 took off from the airfield of the assembly plant in Komsomolsk-on-Amur 5 in October 2012 of the year and, flying in transit through Novosibirsk and Zhukovsky, landed in Venice in October 6. There, in the Customization Center, the plane was painted in the colors of the airline Interjet, the best Italian designers equipped the salon. A special feature of the aircraft was the interior - the 93 seats are spaced with the 86,36 seat pitch, which allows passengers to feel quite free: usually, this step is 76,2 to 78,74 for airlines.

"To save weight - that was our goal: both the interior and the shelves saved 500 kg," said Nazario Kauchelia, head of SuperJet International.

While we were busy with the board in Venice, a spare parts warehouse was created in Florida, and SJI, which became a provider of training services for SSJ100 crews around the world, trained 44 pilots from Interjet, as well as 8 flight attendants and 100 technical personnel.

The first "Dry Superjet" was transferred to the Mexicans this summer at the air show at Le Bourget. 23 flew to Mexico in July and, having made two technical landings in Keflavik (Iceland) and Bangor (Maine, USA), was in Toluca (near Mexico City).

Regular flights began on September 18. Today, both “Dry”, to which a third has recently been added, fly from Mexico City to 6 cities in the country. The longest route is Mazatlan - Mexico (1 h 45 min.), The shortest - Mexico City - Aguascalientes (42 min.). It is expected that in two or three months the geography of flights will significantly expand, including through routes to the countries of the Caribbean and the United States.

And recently, the first results were summed up, which turned out to be quite unexpected. In Mexico, cars dangle like primordial ones: if the average daily SSJ100 fleet in Aeroflot, as reported by pilots on blogs, rarely exceeds 4,5 hours (in Muscovy - 7,2 hours), in Mexico in the first 4 weeks the maximum flight time was higher than 11 hours, and operational reliability was more than 99%. 738 flights have been completed for a total of over 794 flight hours. Only 7 delays were recorded for an average of 23 minutes. Airplanes performed per day before 16 (!) Flights.

According to experts, these are very good results for a narrow-body short-haul aircraft, the Superjet is considered to be a regional airliner designed for short-distance flights, and for him such figures can be called excellent.

“We conducted a survey among our passengers, and its results turned out to be quite revealing: the SuperJet is more like it than the Airbus A320,” seems to have been impressed by the Interjet executive director José Luis Garza. - The distances between the seats, the noiselessness, the volume of the luggage shelves, which are much larger than those established on the А320, - after all, these indicators are of paramount importance for passengers. Fully electric remote control system is more advanced than on А320. On the other hand, we, engineers, financiers and technicians, need reliability, safety, endurance, efficiency, as demonstrated by the new SSJ100. This is a cost-effective product, which is achieved using advanced on-board technologies, low fuel consumption and low operating costs, significantly better than the competition. Moreover, today it is the only regional aircraft in the configuration of 5 seats in a row, which provides passengers with comfort comparable to long-haul aircraft.

According to reviews of Mexicans, "Sukhoi Superjet" became the key for Interjet in terms of airline development. The car confirmed the excellent aerodynamics and performance.

“For many decades in the civilian aircraft industry, we have chosen from 4 aircraft holdings: Airbus, Boeing, Embraer and Bombardier,” adds Miguel Aleman, president of Interjet. - Now the fifth company is entering the market - Sukhoi Civil Aircraft, which will take part in this competition. In terms of the Mexican regional aviationThe appearance of the SSJ100 may affect ticket prices throughout the region. This will be our contribution to the country's economy and help people, as tickets will become cheaper. Compared to the Embraer, the SSJ100 is lighter and more advanced. The cost of its operation is 2,5 times lower than that of analogues, but for us it is a lot. It is equipped with modern avionics, engines provide fuel savings of 10%. Finally, just carry out its maintenance. This is the best plane we had.

Italian pilots from SJI and Mexican from Interjet also note the characteristics of the Russian aircraft, in conversations with us they expressed their compliments to the car. And in particular, in terms of fuel consumption, which turned out to be not just an “excellent”, and even better.

“The Sukhoi Superjet behaves amazingly in the air,” admitted the pilot of the Mexico-Mazatlan flight, Diego Esquivel. - It is maneuverable, easily gaining height, it is pleasant to manage. I worked for many years on Airbus, and honestly, I am surprised by the Russian plane.

Where are the records?

Why is SSJ100 criticized in Russia, and in Mexico it demonstrates more than good results? There are several versions. According to one of them, domestic airlines simply do not have enough destinations where such a plane is in demand. Another possible reason: Mexicans got more technically advanced cars, they are no longer in the top ten, but seriously, taking into account all the remarks, refined (this assumption is also supported by the fact that in Aeroflot the daily average SSJ100 is constantly growing as reported by pilots, exceeded 7 hours). Probably, both black PR and a bias towards the car of some of our “aviation specialists” play a role.

In any case, the experience of Mexicans showed: how the plane is served and planned, so it flies, the rest is talk in favor of the poor. History The success of the same A320 also began not very smoothly.

The first flight of the Sukhoi Suprejet took place in May 2008. At present, the airlines delivered 21 aircraft SSJ100. In addition to the Mexican Interjet, they are present in the fleets of 6 airlines: Aeroflot, Yakutia, Muscovy, Gazprom-Avia, Indonesian Sky Aviation and Lao Central Airlines. Recently, several small Chinese airlines have announced their intention to buy 50 SSJ100.

There are about 200 firm orders for the aircraft.

Ctrl Enter
Noticed oshЫbku Highlight text and press. Ctrl + Enter
We are
Komsomolsk-on-Amur. Inside viewWhat you didn't want to know about England
150 comments
Information
Dear reader, to leave comments on the publication, you must to register.