Fight for the title of "Man of the Year": Vladimir Putin against former CIA agents, politicians, terrorists and female singers

December 2 2013
75
Last week, Russian President Vladimir Putin was among the applicants for the title "Man of the Year" from Time magazine. In total, the magazine announces the names of 44 candidates for this title, which some users consider to be more than honorable, while others are just another PR props. 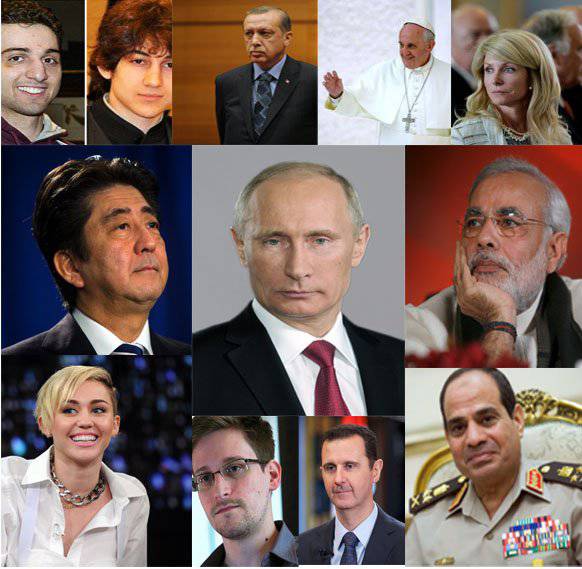 In addition to the Russian president, other politicians were among the “expanded” list, including Iranian President Hassan Rouhani, Syrian President Bashar Assad, Japanese Prime Minister Shinzo Abe, German Chancellor Angela Merkel, US President (who would doubt that ...) Barack Obama (person year 2012 according to the version of the same "Time") and the head of some other countries of the world. Competition to all of them will be such persons as, for example, Edward Snowden, after the scandal declassifying the working methods of Western intelligence agencies who settled in Russia and became world-famous, Dzhokhar and Tamerlan Tsarnaev, who, according to American law enforcement officers, organized the attack on the marathon Boston, and this is already interesting ... There is in the list both Indian oppositionist Narendra Modi, and the Pope (or so - the Pope - as you like ...) Francis, and CEO Twitter Twitter Dick Costolo.

If we talk about who at this stage is leading in the number of audience votes in this draft of Time magazine, the top five look like this (by the way, this top five clearly shows the main interests of the voters):

The fifth position with 3,5% of votes is Wendy davis - The main activist for the rights of women in Texas for abortion;

in fourth position with almost 14,5% of votes - Abdel Fattah al-Sisi - The Minister of Defense of Egypt (today one of the leaders of the country);

the third line of the Time rating with 15,5% was "staked out" by the Indian politician mentioned above Narendra Modi, which "Time" considers the main contender for the post of head of the Indian Cabinet after Singh;

on the second line with 17,8% votes - Recep Tayyip Erdogan - Turkish Prime Minister. "Time" calls him one of the authoritarian leaders of modern states;

and on the first line of this kind of “hit parade”, as it turned out, at the moment is not Barack Obama, not Vladimir Putin, and “not even” the Tsarnaev brothers. First place, according to the voters (according to preliminary results) should be given to the American singer Miley Cyrus. Well, judging by the number of views on the service “Youtube”, then no Obama, along with Angela Merkel, this lady (almost Gaga ...) doesn’t work well with her shoes - she (200-300 million) has them (views)! Cyrus is also a good break from “rivals” in the “Time” voting - almost 7% from Erdogan’s nearest “pursuer”.

Well, this young lady, as they say, both stood and rode along with all the “billions” of views and clearly the kind of presentation of her talent. We are somehow more interested in other job seekers. Who are they? Well, at least President Putin. By the way, today the Russian head is on the 13 position with 1% of votes. That is, if we are guided by these voting results, then Vladimir Putin’s chances of becoming “Man of the Year” and appearing on the cover of Time are minimal. But Putin is unlikely to be discouraged. Firstly, he already has such a title - according to the version of the same magazine, he became “the man of the year” in 2007. Then "Time" awarded this title with the following wording:
for exceptional skill in leading the country, which he accepted and led to stability.

Secondly, the result is determined not only by the counting of user voting, but mainly by the decision of the Time editor (as they say, “we conferred, and I decided ...”).

Secondly, Putin himself, by and large, the “fiasco” with the current 13-th place should be of little concern at all. There are many reasons for this, and the main reason is the need to intensify work inside the country. If in the international arena Putin really looks like a person who is capable of literally turning the situation around and directing the course of events in, let's say, the right course, then here in the conduct of domestic policy there are many questions for the Russian president. One of the main issues is a strange lethargy in the fight against corruption. That is, the official struggle seems to be there, but at the same time it is conducted by such methods that do not bring any benefits to the Russian State, let alone benefits for the Russian people. All the benefits remain for a certain "mighty handful", which is already known in the country almost by name. Moreover, the activities of some representatives of this “handful” are well known since the beginning of the 90s.

It is also necessary to take into account the fact that the majority of Russian citizens also care little about what even the most authoritative publications in the world think about our president, and whether these publications are ready to put photos of Vladimir Putin back on their covers. Most worried about is how much the president is ready to protect the interests of not only Syria or Iran, but also the interests of his own people. Putin himself understands that, of course, trying to transfer his successes on the international arena to the domestic Russian arena. How far this works is another question. Attempts - there are results with the hope of waiting. Well, if only because hope always dies last.

If you go back to the direction of the Russian leader’s activity, which is primarily concerned with the absolute majority of Russians (to fight corruption), recently, “signals” from the authorities have gone towards society. The signals are still timid, miniature steps, but still deny that there is no precedent, either.

In this regard, it is necessary to note the intensification of the Investigation Committee’s activities (of course, as many of our readers crave - it didn’t come to the execution of corrupt officials near the wall (and it won’t work for obvious reasons), but I want to believe that the ice of the rule of law did not move). One of the episodes of such activities of the IC is particularly notable.

Just recently, the head of the Investigative Committee of the Russian Federation, Alexander Bastrykin, sent an appeal to the Chairman of the Supreme Court of Russia, Vyacheslav Lebedev, about the need to initiate a supervisory review proceedings against the decisions of the same Supreme Court in the so-called “prosecutors case”. It is worth recalling that a number of prosecutors with big stars on epaulets, according to the investigation and the testimony of witnesses, were engaged in “protecting” underground casinos in the Moscow region. In this case, several prosecutor's offices near Moscow were arrested, but over time the case began to crumble.

The last “crack”, which the case, in fact, and collapsed, was the release from prison of the former deputy prosecutor of Moscow Region Alexander Ignatenko. As it turned out, Ignatenko in the summer simply expired the maximum period of detention during the investigation (18 months with “Polish imprisonment”). And the expiration of this term, as it turned out, did not happen without some kind of help from the Prosecutor General’s Office, which returned the case to the SC for refusing to confirm the indictment.

Addressing the Supreme Court, Bastrykin says that if the detention of all defendants in the “prosecutors' case” is recognized illegal, and that if all of them “turned out to be innocent”, then this is a clear blow to the competence of the Investigative Committee itself.

In other words, expect new bouts. And if we take into account that such serious government departments come to grips, putting at stake the possibility of a real investigation of anti-corruption cases, then it is obvious that all this “work” should not be ignored by the head of state - a contender for the title “ man of the year "according to Time magazine. Otherwise, it will not even hurt us if the singer Cyrus, for example, takes the first place ...

Ctrl Enter
Noticed oshЫbku Highlight text and press. Ctrl + Enter
We are
New Iranian President Hassan Rouhani: A Beacon of Liberalism or the “Golden Mean”?Geopolitical mosaic: Tamerlane washed his brains to Joharu, and the Americans decided it was time to bomb the Czech Republic
75 comments
Information
Dear reader, to leave comments on the publication, you must to register.