December 2 2013
12
Lockheed XF-90 - a multi-role fighter, which was developed by the American company Lockheed. Like the North American YF-93A and McDonnell XF-88 aircraft, it was designed according to the American Air Force specification for the Penetration Fighter. This single long-range fighter was intended for aviation supporting ground troops or escorting bombers penetrating deep into the USSR. The aircraft was developed by the Lockheed group of designers under the leadership of C. Johnson (later this department became known as “Skunk Works”). 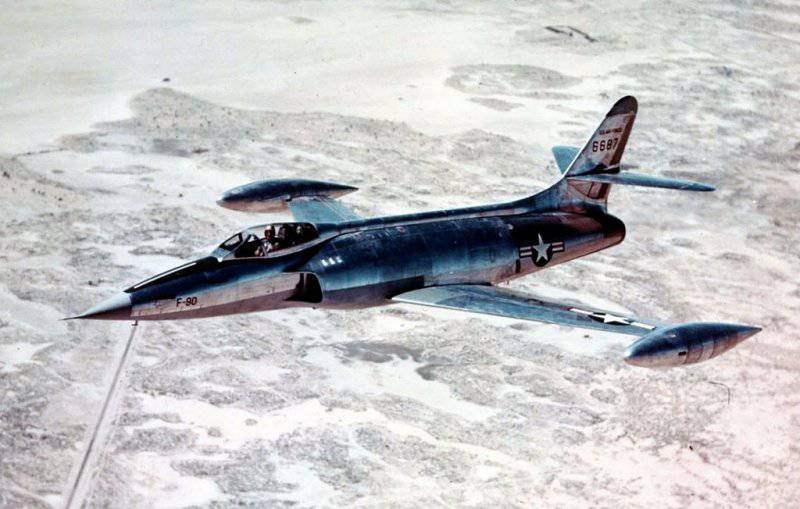 Under the leadership of Johnson, 65 worked on various options, including the V-tail, the W-wing aircraft, the three-engine version, and finally, the rather heavy and large aircraft, which was ultimately chosen (the weight of the XF fighter 90 was the same as DC-3).

20 June 1946 of the year the command of the air force approved the draft presented by “Lockheed” and issued an order for the creation of two experimental machines. Fighter assigned the designation XP-90. Initially, the fighter project had a deltoid wing, however, the flushing of the model, carried out at the California Institute of Technology, showed that the use of such a wing for a long-range fighter does not give advantages. The plant, not knowing about the results of the purge, has already begun to assemble some nodes, but after receiving the relevant information, all the work on the aircraft was stopped, and the fabricated nodes were scrapped.

The designers of the company completely redesigned their project to a new one, which received the designation “90 model”. The fighter on the new project had a sharp nose, swept wing, side air intakes and a pair of engines installed in the rear fuselage. To increase the flight range, the aircraft provided for the installation of additional fuel tanks at the ends of the wing. The design of the fighter used new aluminum alloys, lightweight forged and milled parts. However, despite this, the car turned out to be difficult compared to McDonnell's XF-88 competitor, although identical aircraft were used in both aircraft. According to the same requirements, the North American YF-93A fighter was created, representing the development of the F-86 Saber. 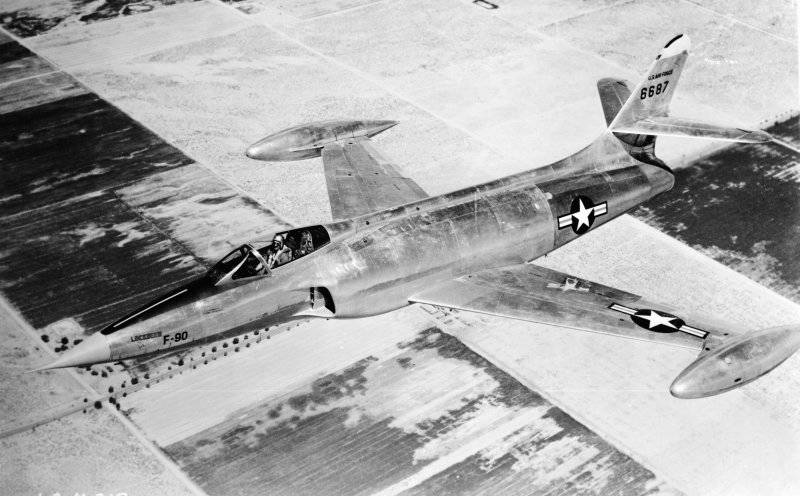 The competition held by the US Air Force for a long-range escort fighter between these three companies revealed the winner - the North American YF-93A fighter. North American even received an order to make the 118 F-93A serial, but in February 1949 was canceled. The main reason was the reduction of the military budget, as well as the fact that preference was given to the construction of strategic bombers and interceptors. The flight characteristics of the fighters nominated for the competition did not suit the command of the air force: it felt that none of the projects would become a good combat aircraft.

The first prototype of the XF-90 fighter was equipped with two formless turbojet Westinghouse J34 engines with a kg 1630 thrust each. The power plant was located in the fuselage. The normal take-off weight of the XF-90 aircraft was about 11800 kg. A significant part of this weight accounted for the fuel placed in the internal and two external dump tanks installed at the ends of the wing. This fuel supply provided a greater tactical range, which exceeded 3700 km.

This car had a number of characteristic features that were noticed in its design on the basis of tests in a supersonic wind tunnel. The fuselage had an elongated, round in cross-section of the nose, which is extended from the air intakes. This form was used to accommodate two turbojets and exhaust pipes. The maximum relative thickness of the low-wing profile was 8%, and the sweep was 35 °. The area and wingspan were respectively 12,2 and 32 meters. The specific load on the wing - more than 366 kg / m2. The tail surfaces are arrow-shaped. The length and height of the XF-90 fighter were 16,7 and 4,5 meters, respectively. 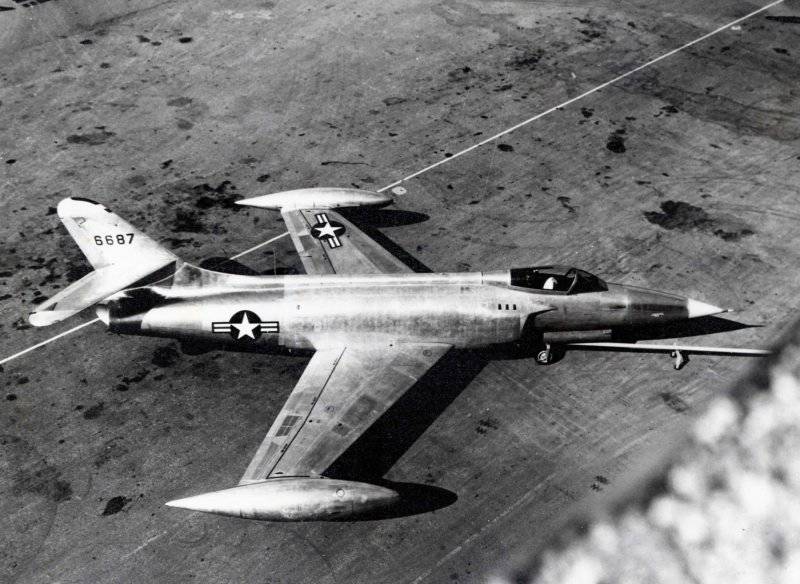 None of the experimental machines had weapons, although the XF-90 project was supposed to be equipped with six 12,7 mm machine guns or four 20 mm machine guns for firing forward. Under the wing of the aircraft could accommodate various weapon for the destruction of ground targets.

The first prototype of the XF-90 fighter, took to the 4 June 1949 g. However, the speed characteristics shown during the testing of the first prototype did not satisfy the customer, so the afterburner engine was installed on the next machine. After the installation of new engines, the aircraft received the designation XF-90A. In a horizontal flight at an altitude of 9784 meters, the speed of the aircraft was 1070,2 km / h, and in a dive the machine could easily overcome the sound barrier. In the area of ​​the Murok Dry Lake (California) in April-May 1950, the XF-90 fighter broke the sound barrier. Piloted the car by Tony Le Pier, a Lockheed test pilot. 17 May 1950 in a dive managed to develop the speed M = 1,12. During one of the flights, Livier almost crashed as the plane barely escaped a dive. Tests of this option showed the best high-altitude and speed characteristics, but the plane needed serious modifications. In comparison with the North American F-86A fighter, which was already in mass production, the XF-90A flight characteristics were lower. In this regard, the command of the US Air Force considered the car insufficiently communicated, and its adoption into service - inappropriate.

To improve flight performance, Lockheed offered several options for improving the fighter. All of them were associated with the installation of new engines, but because of the difficulty of the work they were never implemented. 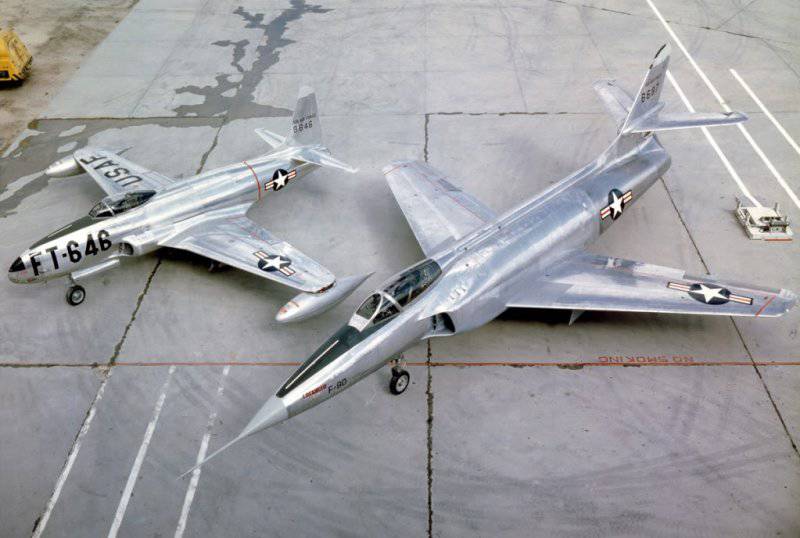 With the start of the Korean War, the US Air Force needed ready and proven fighter jets. Work on the XF-90 stopped. In total, two aircraft of this type were built. In 1952, a second prototype of the XF-90 was used in tests of nuclear weapons in the Frenchman Flat area (Nevada). According to Lockheed, in 1953, the first experienced XF-90 was handed over to the NACA Cleveland Laboratories (Ohio) laboratory. 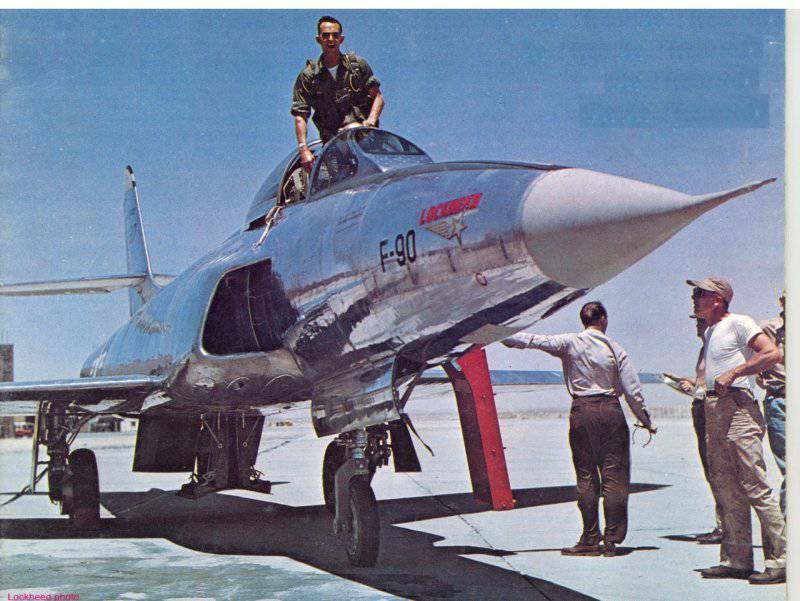 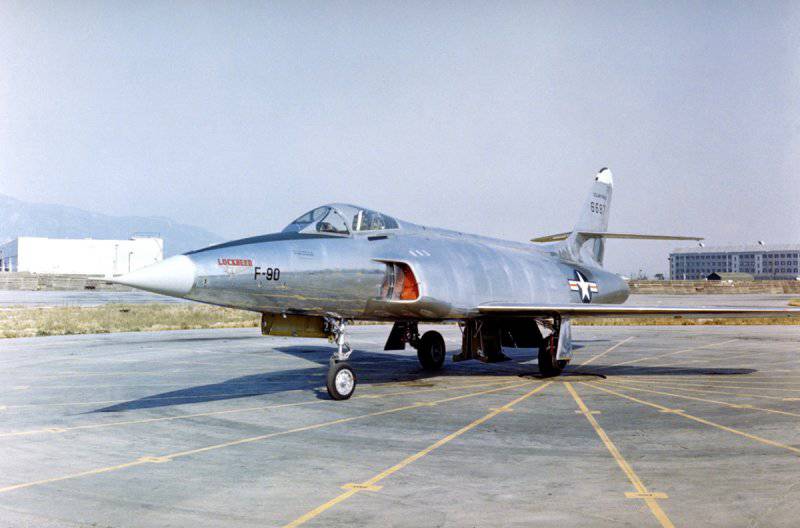 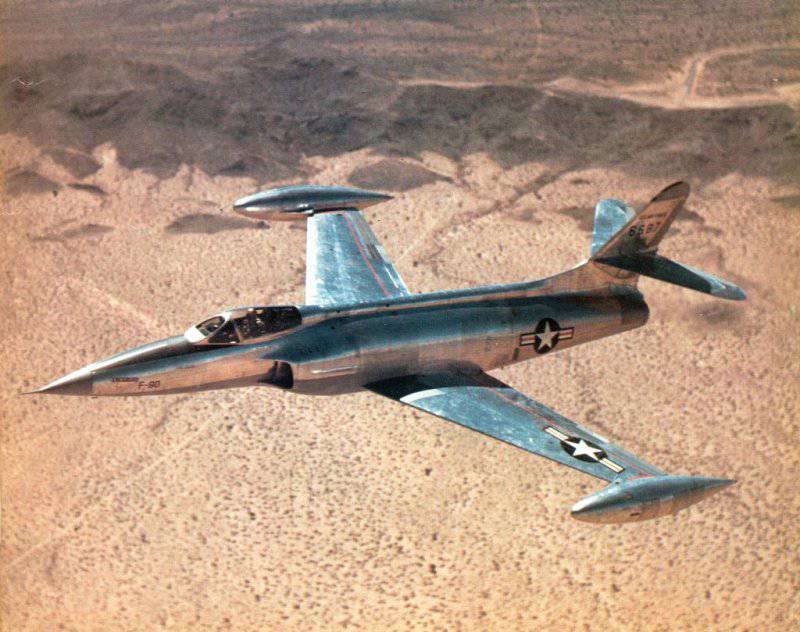 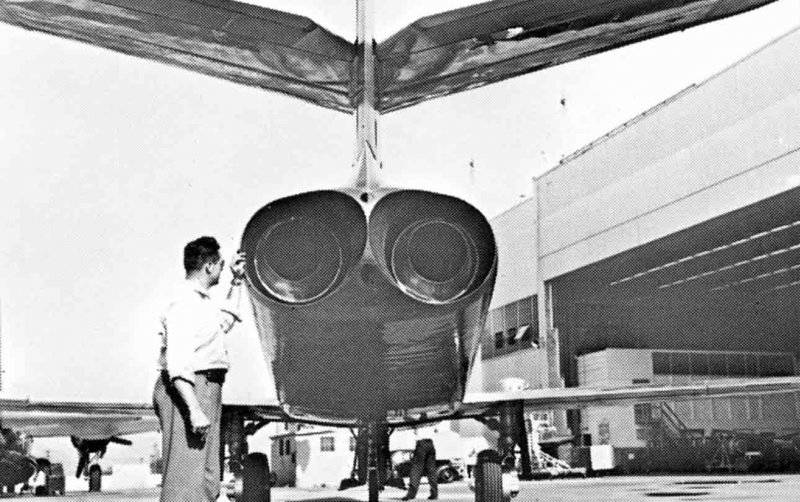 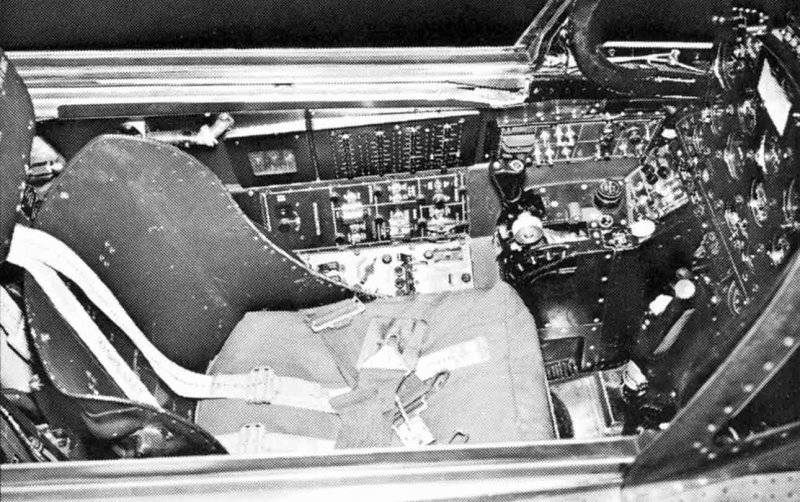 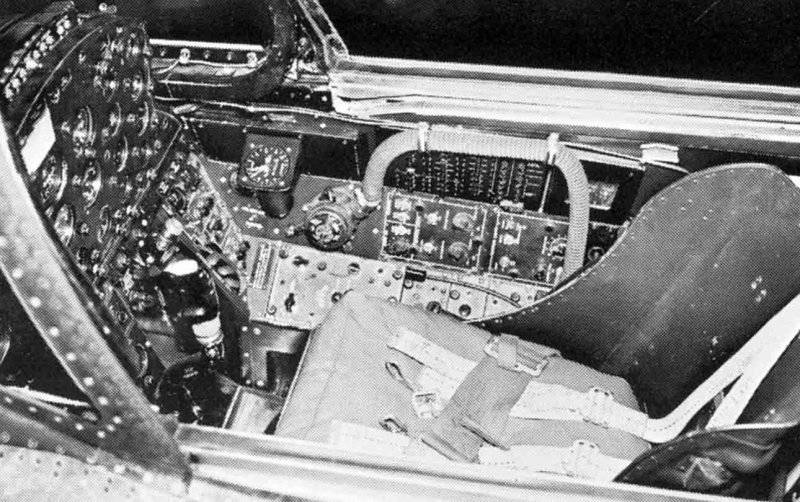 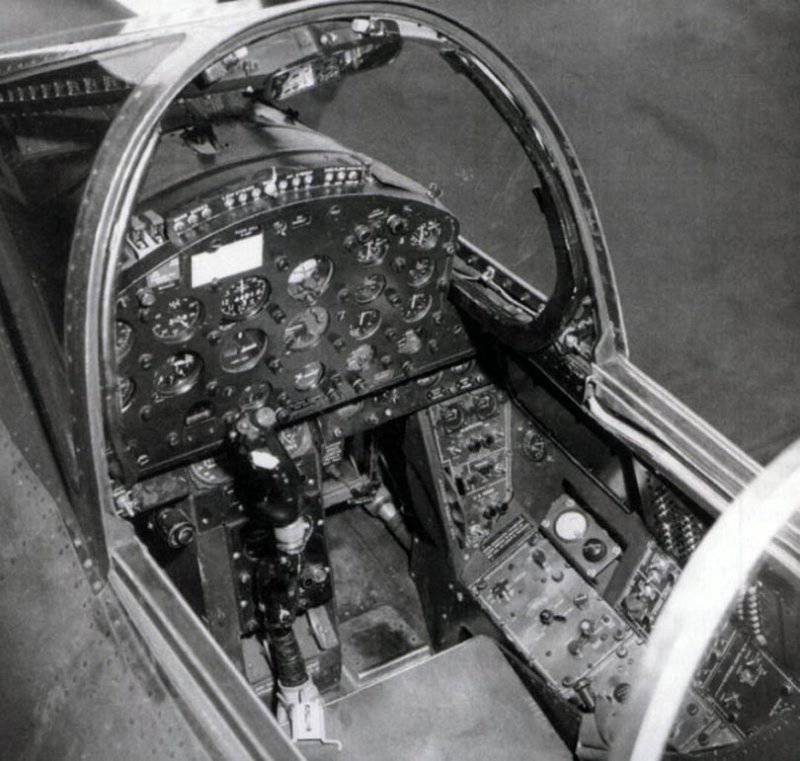 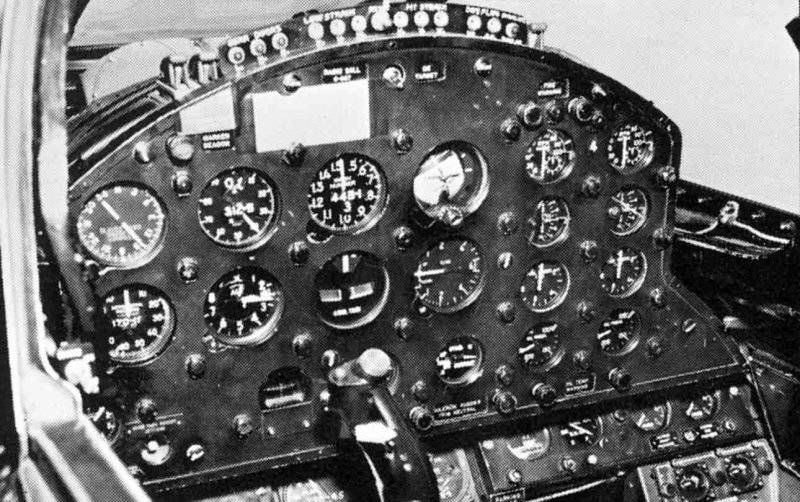 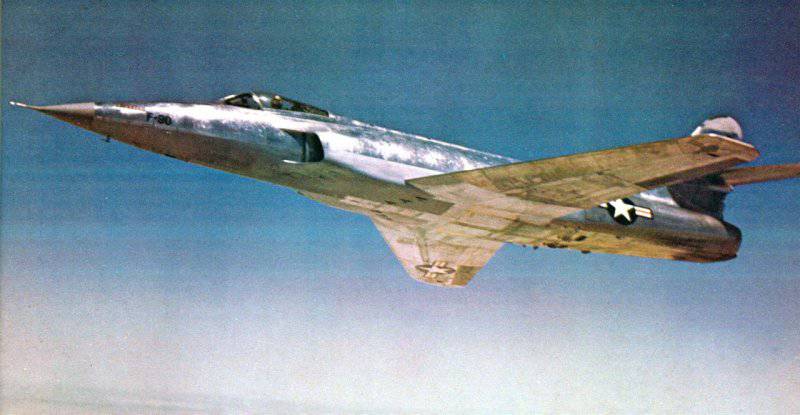 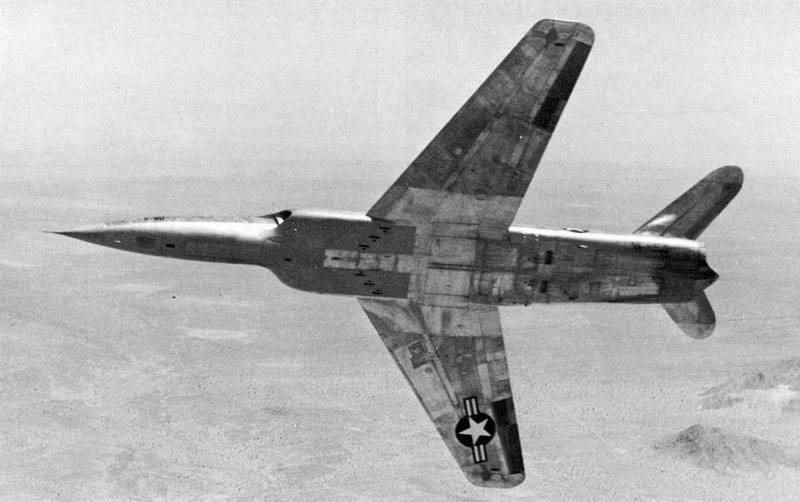 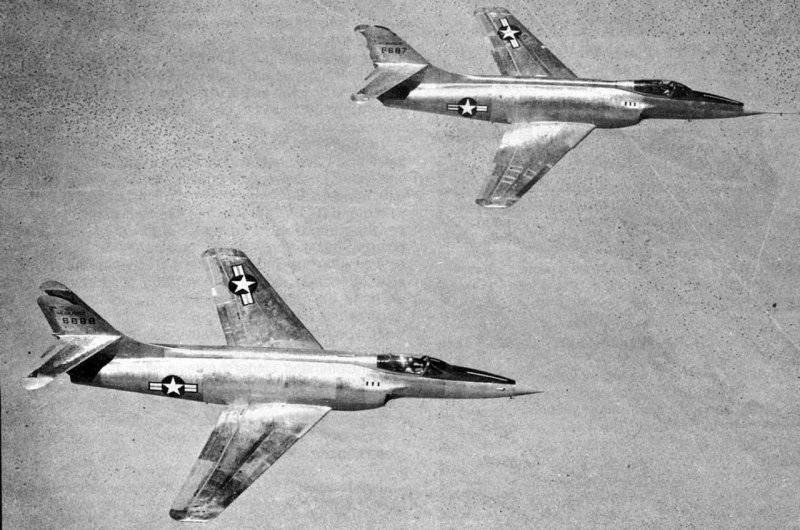 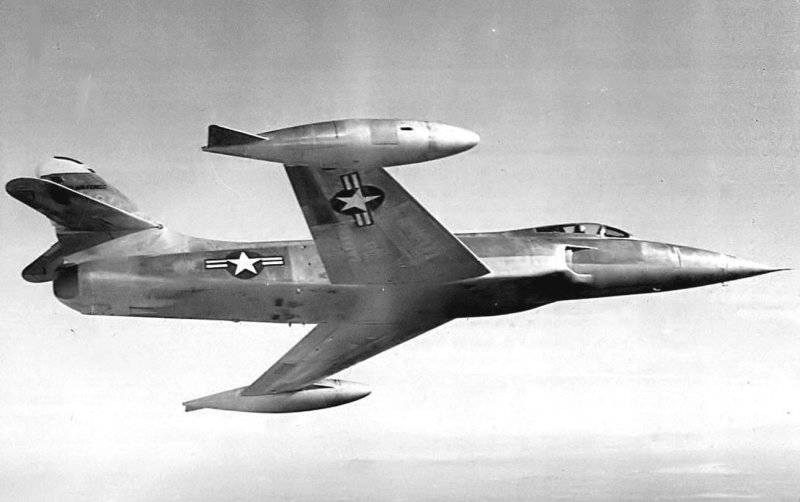 Ctrl Enter
Noticed oshЫbku Highlight text and press. Ctrl + Enter
We are
An-12 in AfghanistanAt the speed of reason
12 comments
Information
Dear reader, to leave comments on the publication, you must to register.