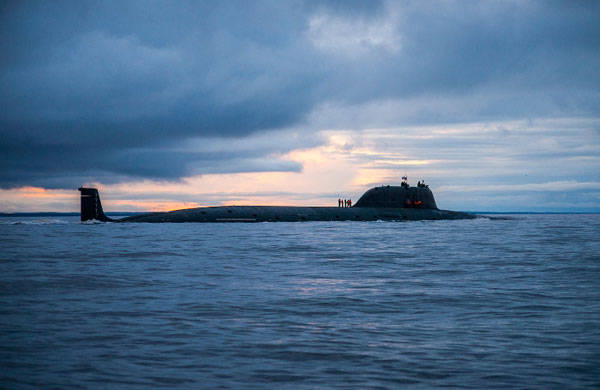 Creating a large series of "Yasenei" is very difficult from an economic and engineering point of view and hardly necessary from a military point of view - categorical and, frankly, a little pleasant conclusion for creators of such submarines is contained in a report prepared by the Expert Council of the Chairman of the Military Industrial Commission and distributed at the All-Russian Forum "Shipbuilding and Shipping of Russia: New Solutions and Economic Efficiency."


The forum is taking place in Moscow, and the head submarine Severodvinsk, mentioned in the Yasen report, completed a complex test program (spent more than 220 days at sea - these are full-fledged 3-4 combat services), is now presented to the state commission and is awaiting the decision of its fate. The previously named deadlines for the transfer of the ship to the Navy have passed, yet another - the end of this year.

Yes, the 855 "Ash" head submarine, which was created by the St. Petersburg Marine Engineering Bureau Malachite and was laid down at Sevmash in 1993, is an unprecedentedly long история childbirth. And with the "Bulava", we note, it is in no way connected - there is a completely different weaponry. This submarine cruiser belongs to the new, fourth generation multi-purpose submarines. According to the stated capabilities and combat equipment, they are designed to replace with themselves two classes of existing submarines at once - underwater hunters (like "Cheetah") and submarine cruisers with cruise missiles (these included the dead "Kursk").

The complex architecture of this ship, given by the designer, was superimposed on the 90's timelessness and turned out to be incredibly difficult to implement when the financing of the military-industrial complex almost ceased and production cooperation disintegrated. Reprocessing work on this order became more active only at the beginning of a new century, and in June 2010 of the "Ash" was delayed after all. The year before, on the eve of the next day of the Navy, a second corps was laid on the stocks of the Sevmash. And they immediately gave their own name to the future ship, Kazan. At the same time, plans to build a large series of submarines of this type — ten or more — were officially announced.

However, on the eve of laying the second "Ash", and after voices were heard that the ships of this series are not only very difficult to build, but also excessively expensive. The exact cost of the officials from the USC and the Ministry of Defense did not disclose, but made it clear that the sum of the cost of one multipurpose boat exceeds the cost of creating a strategic missile carrier.

Russia: New Solutions and Economic Efficiency. ”It coincided that the night before, Russian President Vladimir Putin held a special meeting in Sochi on the development of nuclear submarine forces. From there, the details are minimal. But from the report prepared by the Expert Council of the Chairman of the Military-Industrial Commission under the Government of the Russian Federation and was distributed at the forum in Moscow, it follows that in the next decade and a half the Russian Navy should receive at least 16-18 multi-purpose nuclear submarines.

But! “It is hardly advisable to realize this goal at the expense of the 885“ Ash ”nuclear submarine, the authors of the report say, and suggest that the construction of such ships be limited to four, maximum to six hulls. And from the turn of the 2015-2016 years, in their opinion, it is necessary to build multi-purpose submarines under a new project - unified with the "Yasen" on the main systems, but with a simplified composition of weapons.

"The construction of a large series of Yaseni in the coming decades is very heavy from an economic and engineering point of view and hardly necessary from a military one," the report says. Experts substantiated their position by the fact that the Russian Navy now has 27 multi-purpose submarines of 949, 971, 945, 672 RTM projects, and during the 10-12 years most of these ships will go out of service due to the deterioration of the main systems.

In order to prevent a sharp reduction in the number of combat-ready nuclear submarines (and they are already not enough to solve urgent tasks in the North Atlantic and Pacific theaters of war removed from each other, experts say), the fleet should receive at least 16-18 multi-purpose over the next fifteen years submarines.

4,5 trillion rubles - this amount is planned to be spent on the Navy under the current State Armaments Program (GVV-2020)

Five or six missing units can be replenished by repairing, upgrading and, accordingly, extending the service life of the existing submarines, which retained their resource potential. At the Severodvinsk ship repair shipyard "Zvezdochka" the experience of such works is great, and they will certainly cope with the task set there.

But the construction of new ships in any case must be intensified. And - to optimize from the economic and military-strategic points of view. In the United States, something similar has already been done, replacing the expensive Sivulf submarine project with the Virginia project, the authors of the expert report say.

Multipurpose "Ash": two in one

Submarine "Severodvinsk" carries a powerful set of weapons, including anti-ship operational-tactical complex P-800 "Onyx" with a rocket 3M-55 development Reutov NPO "Engineering" cruise missiles to destroy ground targets, anti-X-35 cruise missiles and strategic cruise missiles X-101. Thus, it combines the qualities of a high-speed and low-noise torpedo submarine (such as the "Cheetah") with the capabilities of a missile cruiser, such as, for example, the dead "Kursk". According to Western and Russian experts, the level of Severodvinsk hydroacoustic visibility is commensurate with the level of the American SeeWolf submarine. At the same time, the 885 project has a higher level of versatility than the American counterpart.

Another distinctive feature of the Yasen submarines is that the torpedo tubes are not located in the bow of the ship, but behind the central post compartment. This allowed to place in the bow of the antenna of the new hydroacoustic complex. In addition, the ship received the latest communications and navigation systems, equipped with an advanced nuclear power plant.

Ctrl Enter
Noticed oshЫbku Highlight text and press. Ctrl + Enter
We are
Russian submarines project 885 "Ash" will compete with the American submarine fleetThe flag is hoisted on the nuclear submarine Severodvinsk!
193 comments
Information
Dear reader, to leave comments on the publication, you must to register.