Sins defenders of the president 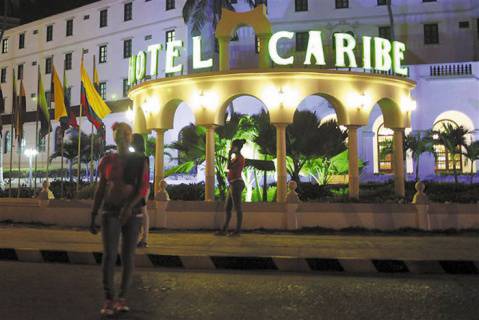 Around the special agents of the White House's Secret Service, which is guarding US President Barack Obama, just as a year ago, a scandal erupted over their immoral behavior. In the American media there were reports of the sexual adventures of the presidential guards. As the press reports, this time Ignacio Zamora, who is the senior curator of a group of more than two dozen Secret Service agents, an elite unit that ensures the safety of the head of America, got into a sinful circle. And in the course of an internal investigation of his offense, another high-ranking guard, Timothy Barraclow, who oversees another group of special agents, joined Ignacio.

For the first time, President’s defense specialists got into a sex scandal last April when they went to accompany the head of the White House during his visit to Colombia to attend the sixth meeting of heads of American states called the Summit of the Americas, which took place in the city of Cartagena.

Members of a group of more than a dozen special agents involved in ensuring the security of the president, to which several officers of the Pentagon’s special operations forces were connected to gain, were found to have links with half-light ladies.

The Secret Service officers and military personnel assigned to them organized a party at the Play Club, located in the industrial zone of Cartagena and known as one of the most expensive striptease clubs in this port city. The number of striptease prostitutes who took part in the entertainment, according to some media, was about 20 people. After the party agents of the presidential guard paid the owner of the club 60 dollars for the opportunity to pick up at least two ladies to their rooms at the Karibe hotel where they stayed.

The unsightly story surfaced after one of the young ladies, who considered that her "services" were not fully paid for, the next morning demanded more money for her caresses. After that, a great scandal broke out. According to the hotel staff, guards convicted of misbehavior and the military drank and drank quite hard. The penalized specialists were immediately sent to the USA and replaced by other agents.

Immediately after this scandal, many members of the US parliament demanded a thorough investigation of the incident. Derrell Issa, chairman of the government oversight and reform committee of the House of Representatives of the US Congress, insisted that the relevant authorities investigate this matter and take appropriate measures to prevent such incidents. He also demanded the establishment of the fact that all prostitutes were adults.

Other parliamentarians said that prostitutes who witnessed the revelations of drunken guards, who boasted of their work and publicly stated that they had come to Cartagena to protect the president, could be agents of foreign intelligence services.

After the outbreak of scandal, the American president, participating in the NBC television show "Late at Night with Jimmy Fellon," called the disgraced employees of his guards "a bunch of doodles." He said that 99,9% of Secret Service specialists work "fantastically." “They protect me, they protect Michel, they protect our girls, they protect US officials around the world,” Obama said and urged Americans not to judge all the experts of this service on the basis of what several morally unstable agents did.

The investigation of the Colombian case for nearly five months was conducted by a special commission of the Department of Homeland Security, whose members interviewed more than 250 Secret Service employees. During the investigation, it was established that the priestess of corrupt delights did not prevent secret agents from fulfilling their duties to protect the President of the United States flawlessly. The Deputy Inspector General of the Ministry, Charles Edwards, then also expressed confidence that prostitutes did not interfere with agents to protect Barack Obama. “Although we found out that these agents did commit inappropriate actions, our investigation did not reveal any evidence that their actions in Cartagena jeopardized the security of the president or any secret information,” he said. Following the investigation, seven guards were forced to leave their jobs.

A NEW TURN IN THE SECRET WOMEN'S DIVERS

During the internal investigation of the unworthy behavior of the White House Secret Service employees who got into the new sex scandal, as reported by the Washington Post American newspaper, it turned out that in May of this year, the main person involved in the case, Ignacio Zamora, during his free time at the bar of the Hay Adams »I met a certain woman whose name and professional affiliation were not called. Special agent spent some time in her room, and then left him. However, he almost immediately discovered that he had forgotten her cartridge from his Sig Sauer P229 pistol. This semi-automatic weapons, developed by request of the Secret special services, all its special employees are armed. This very convenient 9-mm pistol is also widely used by specialists from all departments of law enforcement agencies. While in the ladies room, Zamora unloaded his service pistol to avoid unforeseen incidents.

One of the specialists, familiar with the details of this case, confirmed that Zamora had discharged his weapon at the request of his companion, because she felt uncomfortable next to the armed man. After the meeting, she asked the special agent to leave her room, which he immediately did, forgetting that his last cartridge remained in the room. And all of the ammunition is in special account in the Secret Service and the loss of even one of them leads to the most serious consequences, including a complete demotion.

As the two former presidential security officers told reporters, he did this because the pistol is equipped in such a way that it is immediately ready for firing and does not require juggling the bolt in order to send the cartridge into the chamber. In an emergency, its owner simply pulls the trigger and starts shooting.

The experts also said that, in accordance with the provisions of the instructions and instructions of the Special Service, the gun of each armed special agent has a magazine with 12 cartridges, and the 13 cartridge is inserted into the chamber, so that, as already noted, the agent can instantly open fire. Therefore, this gun does not have any special safety devices and accidentally pulling the trigger or dropping the weapon on a hard surface can lead to an accidental shot.

“Most likely he tried to secure his weapon,” the experts said. For this, the magazine with cartridges is removed from the pistol first, and then the 13 cartridge is removed. If it is not removed, then there may be all sorts of accidents, since such weapons are quite dangerous. This cartridge and destroyed the special agent Zamora.

Finding the loss, the agent tried to enter the number of his new acquaintance, who did not want to let him in. Then the hapless security guard demanded from the administration to provide him access to the room and presented his ID. He so insistently and aggressively demanded to open the number of his lady that the hotel management had to report his misbehavior to the White House, and the rowdy was detained by his superiors.

During the proceedings, it was also established that the mobile phone of Zamora contains messages of a sexual nature to one of his subordinates, which is completely unacceptable by ethical standards of the Secret Service. Similar messages to the same employee were found in Barraklou. Thus, the latter and got into the same company with his colleague.

According to the results of an official check, disciplinary measures were taken against both the offending special agents. Both curators of the presidential security divisions were removed from their posts. And Barraklow was transferred to another department.

After reading its readers about the incident, with reference to anonymous sources, including two officials who had access to materials containing the findings of the inspections, the Washington Post noted that the Secret Service did not comment on the case. At the same time, representatives of the publication stressed that the office of the inspector general of this service did not have any information about what had happened until the Washington Post asked him about the new sex scandal in the past month.

Ed Donovan, a spokesman for the Presidential Secret Guard Service, refused to answer questions from the press about what happened to Agent Samora. He constantly hung up the phone. No other comment was given on the details of this case by other White House officials. The attorney leading the case of the outraged curator also refused to answer any questions.

According to some experts, who they told parliamentarians, agents of the Secret Service in recent years have repeatedly been convicted of violating moral standards both in the US and in traveling around 17 to foreign countries. True, these cases did not reach the general public, and for a long time she remained unaware of the true moral character of the secret guards.

Relations with prostitutes and foreign nationals are strictly prohibited by the Secret Service. This question is specifically considered when recruiting agents for work and assigning them the highest form of access to top-secret documents. However, one of the experts who informed the legislators about the moral character of the special agents of the service, said that her leadership was fully aware of the sexual behavior of his subordinates inside the country and on foreign business trips.

After the scandal in Cartagena, the employees of the service were forbidden to take alcoholic beverages for 10 hours before joining the service. And also set maximum norms for alcohol intake during off-duty hours. Special agents are also forbidden to drink alcohol in the case of staying in the same hotel with persons whom they must protect.

On the eve of the scandal in Colombia, Inspector General of the Department of Homeland Security, Charles Edwards, began work on assessing the level of culture and behavior of the White House's Secret Service. Recently, Ronald Johnson, member of the Senate Subcommittee on Internal Security, and Chairman of the House Supervision and Government Reform Committee wrote Edwards a letter expressing bewilderment about the fact that they had not yet seen a report on the conduct of the Secret Service officers, which was to appear soon .

However, new events indicate that the previous lesson did not go to the front guards of the first persons of America, they continue to violate all norms of human morality.

According to the Pentagon, in the US Armed Forces, too, not everything is so smoothly formed by the sexual part. There, the wave of violence on this basis continues unabated; moreover, it continues to grow. The Ministry of Defense reported that over the period from October last year to June, the current number of sexual crimes in the army increased by almost 50%. But more about that next time.

Ctrl Enter
Noticed oshЫbku Highlight text and press. Ctrl + Enter
We are
Three members of the US Secret Service in The Hague went into hard drinking instead of guarding ObamaThe US Secret Service is once again disgraced
10 comments
Information
Dear reader, to leave comments on the publication, you must to register.