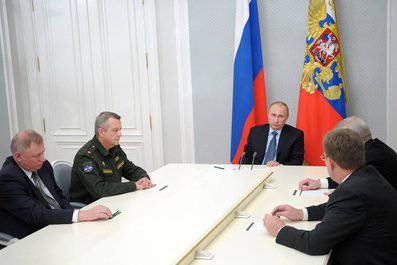 During the meeting, the issues of equipping the Aerospace Defense Forces with modern weapons were discussed.

Today we have already begun a conversation with equipping new types of Russian Air Force equipment, and now let's talk more about the aerospace defense system. We are well with you it is clear that strategic parity, the balance of forces largely depends on her condition. In general, this is one of the most important components of the country's defense.

We have movement in this direction, it is positive. As an example, let me highlight the radar station of high factory readiness "Voronezh". She is already working with us in Armavir, in Kaliningrad, in Lekhtusi, and I must say that in September of this year, practically, so to say, in conditions close to the fighting, recorded launches from the Mediterranean region, in fact - proved its effectiveness and reliability .

In accordance with the plans, in the next five years 7 more stations will have to be commissioned.

I will also note that the process of re-equipment of anti-aircraft missile formations and military units to modern C-400 systems is proceeding smoothly. This year, two regimental sets of this system were transferred to the troops, three more must go to the troops in 2014 year. And this is a good indicator, a good pace, I hope that it will be maintained.

Of course, we must speak not only about modern technologies, but also about leading ones. By the way, we talked about this at a meeting at the Obukhov plant this summer. And in this regard, let me remind you that it was then a question of the Vityaz-PVO medium-range anti-aircraft missile system, as well as the development of the new C-500 anti-aircraft missile system, which will be able to perform not only the tasks within the air defense, but in fact, it will be an element of missile defense.

Let's talk about all this in more detail.

First of all, the development of aerospace defense was aimed at preparing to implement and repel not only modern, but also promising means of aerospace attack. To realize this, as you have already noted, this year state tests took place and the Voronezh-M station was put into service in Armavir. We began preparations for the launch of two more stations on combat duty, which in 2014, in the second quarter, would take up combat duty, and began construction of four more stations. Works are carried out according to the schedule, there are no failures.

In addition, newer weapons systems are being developed in conjunction with industry, which will soon be adopted by the Aerospace Defense Forces. Also within the defense order in accordance with the plans and schedules for service arrive complexes "C-400», «Pantsir-C".

Thus, the tasks assigned to 2013 by the Aerospace Defense Forces will be completed.

S.BOEV: Vladimir Vladimirovich, I would first like to say that, as we promised, we are now are conducting preliminary tests in the Irkutsk and Kaliningrad. We are absolutely convinced that in 2014, these stations will switch from pilot combat duty to combat duty.

In addition, we have now launched at a faster pace the production of radio equipment to subsequent stations. And what the commander said: today we have almost no doubt that all four newly commissioned facilities, that is, four more stations, will be provided with the bulk of radio equipment in 2014. And this means that we will proceed to the preliminary, and then to the state tests without delay. This is what concerns the stations.

In accordance with your instructions, a complex of works on the aerospace defense system as a whole has been deployed to date. This primarily concerns solving the tasks of building a new combat control system, which is fundamentally different from what exists today. Because combat control cycles are required that are commensurate with real time, when solving problems primarily for missile defense and for other massive strikes of promising and modern means of aerospace attack.

The system is built virtually as interspecific, ie regardless of the generic and species, all the forces and means of the reflection of the massive strikes should be involved in a single-loop command and control. This is a principled position, and it is technically supported.

Second moment. In accordance with state contracts and plans of the Ministry of Defense completed a complex of works on the fifth-generation system, which is mentioned - for "C-500». We are entering the home stretch. 2014-2015 years will be devoted to virtually all types of tests of the system, followed by its adoption on arms and deployment of mass production. But in a proactive way, together with the Ministry of Industry, preparatory work is already being carried out to ensure mass production, since the equipment is very complex and even at the stage of prototypes it requires completely new technologies for the production of electronic equipment, individual elements of rockets and so on.

According to the “Vityaz” system, according to the medium-range system, it is the most massive system, which today has been prepared in terms of preliminary state tests. We hope to carry out this complex of work throughout 2014. At the same time, serial production of this system is being prepared so that starting from 2015 – 2016, the serial kits will go to the troops in accordance with the volumes that have been set out in the State Armaments Program until 2020. System, I just remember, it goes to replace the Type series "C-300PT" system "SS" that most mass today in the armed forces.

And in two more aspects. The complex of works is also deployed to provide all types of tests, both field and ground, including the group of enterprises. This is a very large amount of work related to the creation of new target complexes, adequate means of aerospace attack, new measuring complexes, and so on.

And the last group of questions in providing aerospace defense system as a whole and its individual components, of course, is related to the further development of the network service, maintenance, repair and maintenance of army combat training of combat troops calculations. This is a very important aspect, because to date invested serious enough funds to ensure that military training to ensure timely, so that people have been trained, came to the troops.

VLADIMIR PUTIN: How is our production new?

VLADIMIR PUTIN: When did you start it?

VLADIMIR PUTIN: When will we finish?

P. SOZINOV: 2015 - the first phase is commissioned in Nizhny Novgorod and Kirov. The North-West center where you were at the Obukhov plant, in fact, according to the main types of production - 2014. And since 2016, in all areas that concern not only the aerospace defense system, because there is a multifaceted system, including for the Naval Fleet, the basic mass production will be deployed already at one hundred percent load.

In parallel with this, still new electronic technologies, which I have mentioned, are being deployed at these enterprises, not only within the concern, but also at Ruselectronics, with the support of the Ministry of Industry and several other enterprises.

VLADIMIR PUTIN: When will they issue products?

P.SOZINOV: In mass production, we expect, starting from the end of 2015, we will be able to receive the domestic element base, primarily on the microwave, electronic component base, directly in proper volumes. Today, preparatory work on technology is underway ...

VLADIMIR PUTIN: But will these new plants start selling products?

Ctrl Enter
Noticed oshЫbku Highlight text and press. Ctrl + Enter
We are
A great interview with Sergey Lavrov: about Ukraine, Obama and IranInterview of V. Putin to Channel One and the Associated Press Agency
15 comments
Information
Dear reader, to leave comments on the publication, you must to register.