Projects of mobile machine gun and cannon installations for fighters

November 30 2013
55
The first jet fighters, ahead of the speed of their piston predecessors, they lost in maneuverability. The engines of that time could not provide a sufficiently high thrust-to-weight ratio suitable for conducting a full-fledged air combat. Because of this, attacks by enemy aircraft, including bombers, could fail, because the fighter did not always have time to complete the necessary maneuver. Already in the late forties, the first proposals appeared to solve this problem. In addition to creating more powerful engines, it was proposed to improve the weapon installation system.

In 1950, the United States created a new range of weapons for fighters. The AERO X17A system was intended for installation on the Grumman F9F-3 Panther fighter, and, as expected, could significantly enhance its combat capabilities. 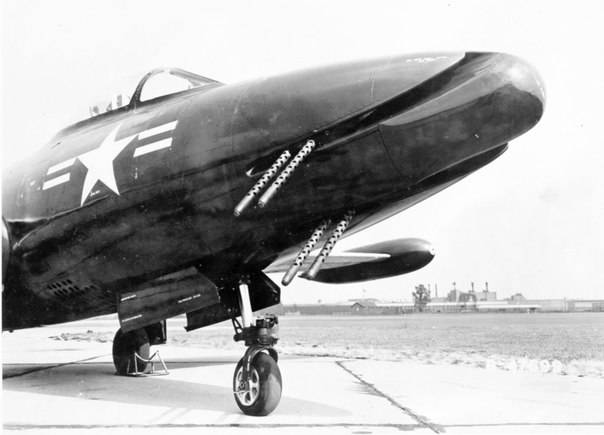 When developing advanced weapons for the F9F-3 fighter, the American designers intended to maximize the time the target stayed in the zone available for the use of small arms. To this end, it was proposed to install on the fighter a mobile machine gun installation capable of directing machine guns or guns in two planes. Calculations showed that in the dimensions of the Panther aircraft it is possible to develop a turret for large-caliber machine guns capable of firing a target from above, below, right or left of a fighter with an elevation angle of the weapon (relative to the longitudinal axis of the aircraft) to 120 °. The control of such an armament complex was supposed to be carried out with the help of an automated system with a radar sight.

Preliminary design of the new system, designated AERO X17A, showed its great prospects. During an air battle, a fighter with a mobile machine-gun installation would have been enough to approach the enemy's plane for several hundred meters, after which the automatic equipment could independently direct weapons and fire. The dimensions of the firing sector, in turn, allowed the aircraft with the AERO X17A to approach the target from almost any angle and without significant speed or maneuver restrictions. Such advantages of a promising project led to the assembly of a flying laboratory to test a new weapon system. 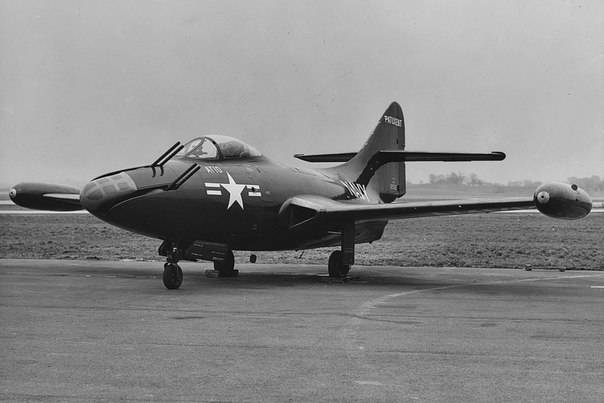 The fighter F9F-3 (122562 serial number) was chosen as the basis for the prototype aircraft. In accordance with the project, the nose of the aircraft was replaced by a unit of similar size and shape, but with different equipment. Inside the fairing placed four large-caliber machine guns Browning M2 with guidance system. The machine guns were arranged in pairs on two lifting mechanisms, which allowed them to be deflected from the longitudinal axis of the aircraft. To ensure the elevation angle to 120 °, characteristic elongated notches appeared on the fairing. In front of the fairing, between the grooves of the machine guns was a radar sight antenna. Finally, the entire nose cone with machine guns and antenna could rotate around the longitudinal axis, turning the weapon in the right direction.

The electric actuators of the AERO X17A system made it possible to rotate the entire fairing with armament at speeds up to 100 degrees per second and direct machine guns at speeds up to 200 ° per second. To control the rotation of the fairing and the guidance of machine guns should have been a special automatic system, coupled with a radar sight. If necessary, the pilot of the aircraft could use the X17A system as a course weapon, fixing machine guns and a radar sight in a neutral position. The sight in the cockpit performed movable.

Tests of the Grumman F9F-3 Panther with the AERO X17A mobile machine gun installation continued for several years. The mechanical part of the armament complex did not require a long finish. Within a few weeks, the work of mechanics was debugged and the designers of Grumman and colleagues from related firms began testing and refining the control system. First, there were serious problems with the radar sight, and then the shortcomings of the early versions of the control system were added to them.

Work on fine-tuning of electronic systems continued until the 1954 year. By this time, some progress had been made in creating a radar sight, but the weapon control system remained crude and unsuitable for use in practice. Correct determination of the coordinates of the target relative to the fighter, the calculation of the angles of rotation of the weapon and its guidance turned out to be quite a challenge. Despite all the efforts, American engineers were not able to create usable algorithms for the operation of the complex.

Four years of work yielded almost no results, not counting some experience in creating computing equipment for aircraft. However, the AERO X17A system still could not perform its tasks, which is why the project was closed. Probably, the first successes in creating advanced air-to-air guided missiles put an end to this project. The aircraft, armed with the AERO X17A complex, remained in a single copy, and a small number of developments on the project were later used in other projects.

It is not known whether Soviet designers knew about the American project X17A, but in 1953, OKB-155 began work on their own project of a similar weapon system for a fighter. To increase the combat effectiveness of a promising aircraft, the designers of the bureau A.I. Mikoyan suggested using a mobile unit with cannon armament.

To test the new unit called CB-25-MiG-17 a group of engineers led by N.I. Volkova created a draft revision of the MiG-17 fighter under the name "SN". To install the new weapons complex had to significantly rework the nose of the fuselage. Because of this, the plane lost its characteristic frontal air intake, instead of which it was necessary to use two side ones. In addition, the fighter received a new nose fairing. 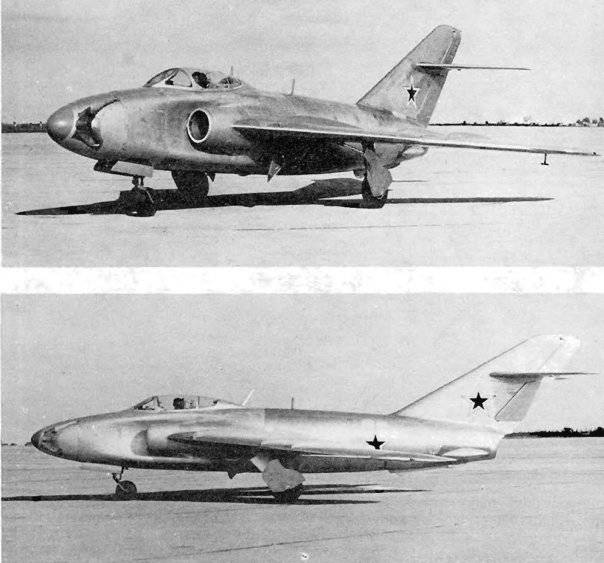 The gun installation CB-25-MiG-17 carried three experimental guns TKB-495 (AM-23) caliber 23 mm with ammunition for 100 shells. All guns were placed on a guidance mechanism capable of raising them to 27 ° 26 'and lowering them to 9 ° 28' relative to the axis of the aircraft. Two guns were located to the left of the axis of the fighter, one - to the right. On the nose fairing grooves of a characteristic shape were provided through which the trunks went outside.

The Aist radar sight and the Radal-M radio range finder were also placed in the nose of the aircraft, and the ASP-4HM optical sight in the cockpit. The sight was equipped with a turning mechanism that provided simultaneous tilting while moving the guns. Thus, the pilot could constantly use the same scope, regardless of the position of the guns.

In 1953, the factory tested the aircraft "SN", and in February, 54-th state began testing a new gun installation. It is worth noting that of the 130 flights under the test program of the CB-25-MiG-17 mobile cannon installation, only three used the CH plane. The rest participated in a special way modified IL-28, the dimensions of which allowed to place all the necessary equipment. In 13 flights, a flying lab fired at ground targets. The total ammunition consumption was 15 thousand shells.

The staff of the Air Force Research Institute carefully studied the new cannon mount and noted its high performance. Moving guns made it possible to hit targets in horizontal flight at an altitude of about 100-200 meters without the need to enter a dive. At the same time, however, the angle of elevation of the guns was limited to 9-10 degrees. The fact is that at large angles the ASP-4HM sight occupied a position in which the pilot could not use it. To solve this problem, it was proposed to create an automated gun guidance system at high angles, but this did not solve another problem. Calculations have shown that firing long bursts at high angles of elevation can change the flight path of the aircraft.

According to the results of tests of the SV-25-MiG-17 installation, a proposal was made to build a small batch of SN aircraft with new weapons, but the leadership of the armed forces did not approve it. Probably, the decision of the command was dictated by the specific characteristics of the new aircraft. Having quite high combat characteristics, this fighter noticeably lost to the MiG-17 aircraft in terms of its flight data. The maximum speed of the “SN” was 1058 km / h (60 km / h less than the MiG-17), the practical ceiling dropped to 14500 meters, and the turn time at the height of 10 km increased by 15 seconds. In addition, the side air intakes needed serious refinement. Due to the imperfect construction of these units, the engine thrust decreased, a tendency to surge appeared, and a number of other parameters deteriorated.

In its present form, the gun installation of the CB-25-MiG-17 allowed to deflect the guns only at a small angle, which did not allow to achieve the expected characteristics. This fact and the deterioration of flight data led to the refusal to continue work. Automation control did not develop and all the work on the subject of mobile gun installations stopped. 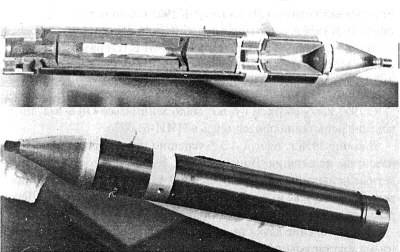 In the early eighties, Soviet aircraft designers again recalled moving cannon rigs. At this time, a promising system was to become a weapon of a new modification of the Su-25 attack aircraft. Unfortunately, very little is known about the TKB-700 cannon project, but the available information allows us to present its appearance.

At that time, several options were considered for increasing the firepower of the Su-25 aircraft, one of which implied the use of an automatic 45 caliber mm gun. Working on a new theme, the staff of the Tula Central Design Bureau of SOO proposed using a radically new ammunition. To facilitate the gun, as well as to ensure the high power of the projectile, it was decided to make it active-reactive. The shell length of 250 mm consisted of a cumulative warhead, solid propellant rocket engine and propellant charge. The armor penetration of the 45-mm projectile was at the level of 200 millimeters.

Unfortunately, information about the design or method of operation of the gun TKB-700 is missing. It is only known that this weapon could fire at a rate of up to 1250 rounds per minute. Also, the design of the mobile gun mount on which it was proposed to mount a promising weapon, the composition of the guidance system and other aspects of the project remain unknown.

There is information about the testing of a mobile gun installation with a TKB-700 gun on the Su-25 aircraft. According to available data, the rate of fire and the mobile system for setting up the gun made it possible to “put” into a target the size of a tank up to 6-8 shells in one go. The cumulative projectile warhead, in turn, ensured a reliable defeat of enemy armored vehicles.

However, shortly after testing, the TKB-700 project was closed, and the Su-25T attack aircraft received an 30-mm gun. The reasons for abandoning the new gun with an active rocket are unknown. Perhaps, during the tests, some of its shortcomings were revealed, or the reluctance of the customer to refuse existing ammunition had an effect. Anyway, the gun system for the Su-25 attack aircraft based on the TKB-700 gun replenished the list of projects that did not go beyond the testing stage.

Ctrl Enter
Noticed oshЫbku Highlight text and press. Ctrl + Enter
We are
Coastal Warships: Modern Approach"Svetlana". History of creation
55 comments
Information
Dear reader, to leave comments on the publication, you must to register.