November 29 2013
260
Last week, the head of the Investigative Committee of Russia, Alexander Bastrykin, said that in the near future, regarding the Anatoly Serdyukov, the RF IC will present something that can “please everyone”:

We conducted a whole range of financial and economic examinations, since this is an economically difficult matter. And we will soon have changes that will please everyone, I would say so, so carefully ...

And in the morning of November 28 on the official website of the Investigative Committee of Russia, it was reported that the ex-Minister of Defense received a new status, turning from a witness to an accused. 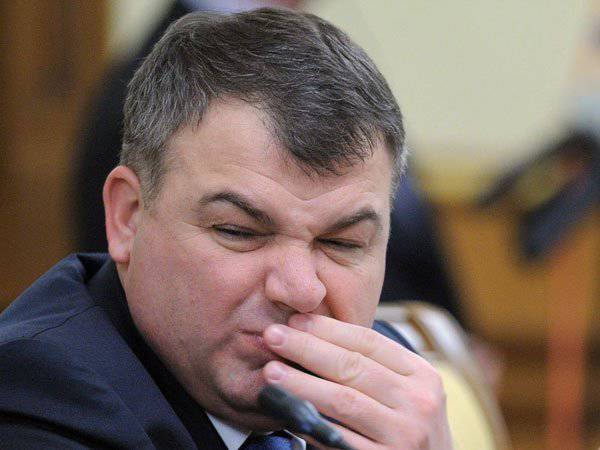 The Main Military Investigation Department (GVSU) of the RF IC unleashed a criminal case against Anatoly Serdyukov on the “Negligence” article (Art.293, part.1). The former defense minister is accused of being in a ministerial position, he instructed his subordinates to build a highway in the Astrakhan region before the well-known (or rather scandalous) well-known recreation center “Zhitnoye”, and in addition to work on landscaping of the base itself. In GVSU of the RF IC, they note that the labor of soldiers serving at the time of conscription, as well as budget funds, was used. At the same time, the investigators did not find any documents that could substantiate the feasibility of this type of construction for the needs of the Ministry of Defense, as well as the legal rights of the Ministry of Defense for the constructed road and the “sanitized” base. In other words, Anatoly Serdyukov explained to someone verbally that the construction site was very necessary, and the one to whom he explained this fulfilled the verbal order of the minister, taking the visor.
The Investigation Committee announced that after the large-scale inspections carried out, the road to the Zhitnoye recreation center, and the base itself was put on the balance of the main military department. The total damage to which Serdyukov was involved in the “Zhitnensk case” was estimated by the investigators to be 56 million rubles (let's say, lower than the cost of an “ordinary” apartment in Molochny Pereulok ...)

What threatens the ex-minister according to the letter ch.1 st. 293, which he now passes as a suspect (well, “what does it threaten?” - this is if the court finds Serdyukov guilty)? First you need to quote the actual first paragraph of this article:

Negligence, that is, non-fulfillment or improper fulfillment by an official of his duties as a result of unfair or negligent attitude to the service, if this resulted in major damage or a substantial violation of the rights and legitimate interests of citizens or organizations or legally protected interests of the society or the state ...

And here is the punishment that can "shine" to the defendant (convict):

Even if it doesn’t particularly extend to the topic of why “before” billions appeared in the case, and now the sums of damage have fallen, as the mathematicians say, by two orders of magnitude, then the charge, and especially the hypothetical punishment, looks, to put it mildly, unintelligible. Why are there "unintelligible" - they look funny. Therefore, the words of Alexander Bastrykin that “the changes will please everyone” can be rephrased as “they will all laugh”. Well, in fact, the article “Negligence” is probably the most naive thing you could think of in this regard. After all, it turns out that without signing any documents to achieve the construction of a road to a private shop at public expense, and even with the hands of a free “workers” in the form of recruiting soldiers - this is just an improper performance of their duties ... And to achieve construction by the Minister, who is loudest he trumpeted that it was not a matter for a soldier to build a general's cottage and dig potatoes, but his business was to comprehend military science ...

But even if one makes an incredible effort and supposes that negligence looks like this now, then what effort should be made to explain why for the 56-millionth (voiced) damage to the figurant a penalty in the amount of up to 120 thousand rubles or arrest for a term again “ up to three months! .. As you can see, the article of the Criminal Code contains other variants of punishments, but, to be honest, it is hard to believe that Anatoly Eduardovich will be busy for a year for some correctional work ... If not to take, of course, »Works, for example, in" Rostec ".

A number of Russian media (for example, the Trud newspaper) publish materials in which some unnamed sources close to the investigation state the possibility of changing the article for the ex-minister to a more rigid one. In particular, we can talk about the clerical work under article 285 of the Criminal Code of the Russian Federation (“Abuse of official powers”). In this article there is, for example, part two, which says:

According to the h.2, Art.285, the person involved may face the maximum penalty of seven years in prison.

However, the retraining, as well as the actual term for the ex-minister, are all purely hypothetical substances. And to talk about them on the basis of words represented by certain "unnamed sources" is clearly too early.

Meanwhile, deputies from the Communist Party faction in the State Duma expressed the initiative to launch a parliamentary investigation regarding the activities of Anatoly Serdyukov as head of the defense department. About this, in particular, said Yuri Sinelschikov (member of the Committee on Civil, Criminal, Arbitration and Procedural Law), the former first deputy of the capital prosecutor. To start a parliamentary investigation under the law, it is necessary to point out the facts of violation of constitutional rights and all the circumstances of an emergency. The CPRF believes that there are necessary grounds for this.

There are grounds, yes, but it is strange that the deputies are recalling the possibility of a parliamentary investigation into all the “defense service” peripetias just now. It was involuntarily thought that the legislators, who identify themselves as members of the parliamentary opposition, were waiting for a peculiar dubbing - in the form of transferring Serdyukov from the status of a witness to the status of a suspect. Like, now you can ... And before that, it turns out, the deputies were hindered by the start of their investigation ... Will they be given to start it now? ..

It is noteworthy that the aforementioned Yuri Sinelshchikov himself also left the supervising (in the Moscow prosecutor's office) at one time, not at will. From the decision of the Prosecutor General’s Office regarding the dismissal of Sinelshchikov after the checks carried out in 2003:

... for the systematic inadequate performance of official duties, expressed in the failure to ensure the actual improvement of the supervision of the preliminary investigation in the Moscow prosecutor's office.

By the way, it should be noted that the lawyers of Anatoly Serdyukov (and now there are two of them: Heinrich Padva and Konstantin Rivkin) declare that they did not receive any notice of initiation of a criminal case against their client ... Rivkin notes that Serdyukov has so far received only a subpoena for interrogation (it is not clear what quality it is now) in the RF IC. At the same time, Anatoly Eduardovich himself does not recognize his guilt (under the article “Negligence”), the media also learned from the lawyers of the ex-minister.

Some piquant situation: I did not receive notifications about the initiation of proceedings, but no longer admitted guilt ... As they say, I did not read it, but I condemn it ...

Turning away from Anatoly Serdyukov, it is worth paying attention to another figure of a big cause - Evgeny Vasilyev. Recently, she began to actively deliver speeches through the media, giving various interviews and publishing open letters. It’s pretty simple to describe the essence of the interview with the words of the heroine of a famous Soviet film: “I’m not to blame ...” One of the most recent interviews, Ms. Vasilieva gave to TK Rain, which she shared with Ksenia Sobchak “the most intimate” by inviting her the lane. 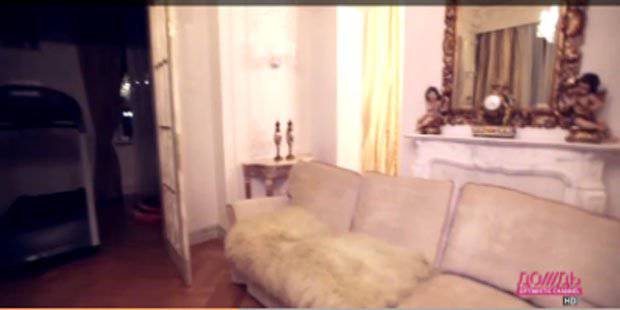 Sobchak "walked" around the apartment with a total area (according to Vasilyeva) 192 sq.m. The hostess offered a guest ... drying, conducted through the rooms, decorated in classic beige tones, reminiscent of some lordly chambers. Eugenia Nikolaevna told that the apartment “has been around for a long time”, that the grandmother collected the furniture, that there are no 13 rooms, and then, sitting in a snow-white armchair, she said that the Oboronsersisa case was a quotation: “a misunderstanding”. 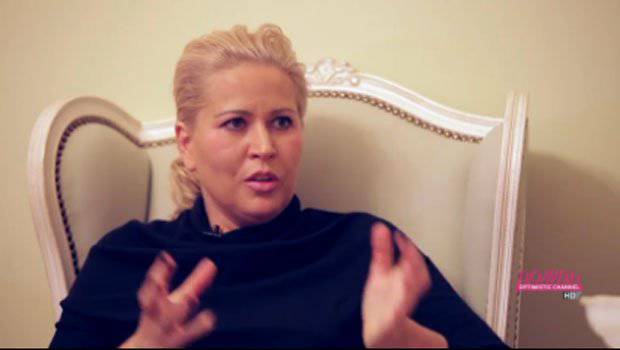 After this and other interviews, an official representative of the RF IC said that the investigation would petition to arrest Vasilyeva. The main reason is that Vasilyeva through the media can give signals about the “right behavior” to other persons involved in the case with which she is prohibited to communicate.

And this material ends with a tune from the TV series "Santa Barbara" ...

PS Press Service of the President of the Russian Federation:
We do not comment on this.

Ctrl Enter
Noticed oshЫbku Highlight text and press. Ctrl + Enter
We are
Results of the week. “Now Humpback! I said: Hunchback! ”Results of the week. "It is not that fever, that is the center of gravity"
260 comments
Information
Dear reader, to leave comments on the publication, you must to register.