Not mature to democracy

Vladimir Vladimirovich Putin the other day intelligibly described happy America: “There you only reach into your pocket if the policeman is standing opposite, she will shoot the rhinestone. There are many examples, almost every week. Immediately right without words - a bullet in the forehead, that's all. We, thank God, have not grown to such a democracy yet. I think we will not grow. ”

American police have long surpassed Al Capone. If you look through the bulletins News, then the hair will stand on end. "Cops" kill children with plastic guns, they do not shoot criminals, but those who are injured, they plant bullets in passers-by - simply because they accidentally fell into the path of "law enforcement officers." Revolvers and pistols have long been a continuation of the hands of the police. It is amazing how these warriors did not shoot all their friends and family ...

In late October, 2013, in Santa Rosa, California, sheriff's assistants shot a thirteen-year-old boy named Andy armed with a ... plastic machine gun. The police took the toy for real AK-47. Moreover, one of the “law enforcement officers” who killed the child had previously served in the army: he was a professional military officer. 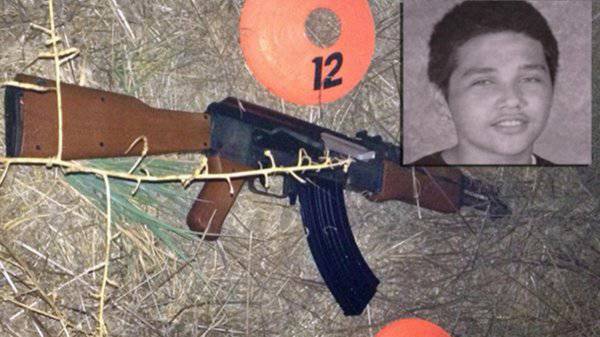 Vigilant law enforcement officers passing through the street in a patrol car noticed an "armed" teenager, stopped the car, got out of it, hid behind the doors and ordered Andy to put weapon to the ground. It is not known whether the teenager was frightened by police officers, or for some other reason did not immediately react to their shouts. Now no one will know. The shooting started. The media writes that one of two officers, namely Eric Dzhelhaus (sheriff’s assistant), shot the boy. Then, during the trial, the police said that it seemed to them that the child intends to raise the "automatic" ...

How many times did a sheriff's assistant shoot a child? Maybe he aimed at his feet? Or first shot up?

No, he beat to death. And hit Andy seven times. Two wounds were fatal. This is not an invention of journalists, and the results of the autopsy.

Police felts seemed small; they also decided to chain the "criminal" into handcuffs. Shackled him already dead. Then they searched their victim. And they found a gun in Andy's pocket. Also plastic.

Then a protest demonstration took place in Santa Rosa, in which more than a thousand people took part. People shouted: “This officer served in the US Army, he should have known the difference between real weapons and plastic toys!” 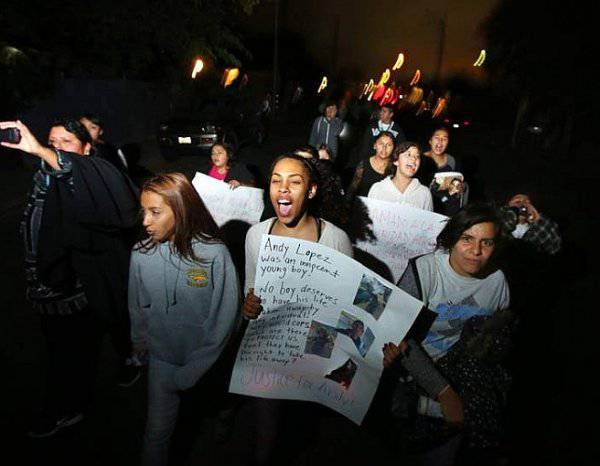 Earlier, in the same October, the Washington police killed a woman in a car, arranging for her a whole cine chase between the White House and the Capitol - after the driver nearly ran into the White House. When the woman was killed, it turned out: in the car, besides her, there was an one-year-old girl. She did not suffer by pure chance. Later it became known that the deceased 34-year-old Miriam Carey was no terrorist and did not intend to blow up the Oval Office with Obama inside the belt of the suicide bomber. She suffered from depression - and probably lost control. However, the police in the United States first shoot, then think.

Earlier, on September 14, the “guards of order” oparafilis in New York, on Times Square. Noticing a strange man, who then ran out onto the roadway, then ran away from her, and when the police approached, he also put his hand in his pocket, without hesitation, they opened the firing. They did not hit the suspicious comrade, but they shot down two women, seriously injuring both of them.

Having cleared a way for themselves, the policemen managed to guess that the Mr. pursued by them was unarmed. Only this saved his life: instead of revolvers, "cops" used a stun gun. Subsequently, the doctor explained that this person was mentally unstable.

There are many such people in the US - unbalanced and suffering from depression. It seems that the “guards of order” decided to shoot them all. Together with children who roam the streets with plastic machine guns and pistols.

Some local resident called the law enforcement officers by phone: an unknown person seemed to be bursting into her house. This "unknown", seeing a police car, immediately rushed from the door, which knocked, to the policemen. Of course, he had no weapons. 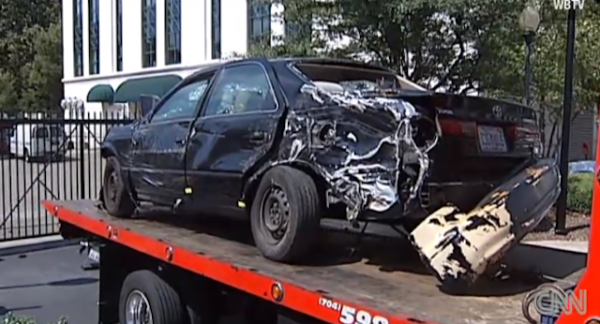 Without hesitation, the “guardian of order” pulled out a stun gun. But the machine for some reason did not work. Then the second policeman opened fire with a pistol.

Nearby, police found a damaged car that belonged to Mr. Fairrell. It turned out that this man had an accident and knocked on the nearest house to ask for help. Instead of helping her neighbor, the hostess called the police. And since the police in the United States prefer to shoot all suspicious, the bell played a fatal role in the fate of a stranger.

These are all facts.

Perhaps, the US police, which is allowed to shoot when hit and into anyone, inspires real fear of the bandits and robbers and with such powers is very effective in the fight against crime? Perhaps in the United States long ago ended with gangsters, street gangs, robbers and murderers?

October 18 police of Greenville, Mississippi, arrested four young people between the ages of 18 and 19 who were suspected of killing 87-year-old World War II veteran Lawrence Sornton. These adolescents didn’t have exactly any fear and acted in cold blood in broad daylight.

Sorton was hit right at his house. The old man was knocked to the ground and the wallet was torn from him. The veteran died in the hospital.

As for crime, it does not decline in the United States, but is growing rapidly.

The official statistics of the FBI as the most dangerous metropolis of the United States recently recognized Chicago, where gangs of Latin Americans and blacks roamed. In 2011, 431 people were killed here, and in 2012, 515 people were killed. At the same time, the entire 419 killings occurred in New York. At the same time 2,7 million people live in Chicago, and 8,3 million live in New York.

Other deadly cities in the USA: Detroit, Philadelphia, Los Angeles. Indianapolis turned out to be the least dangerous following 2012: only one hundred and one people were killed there. 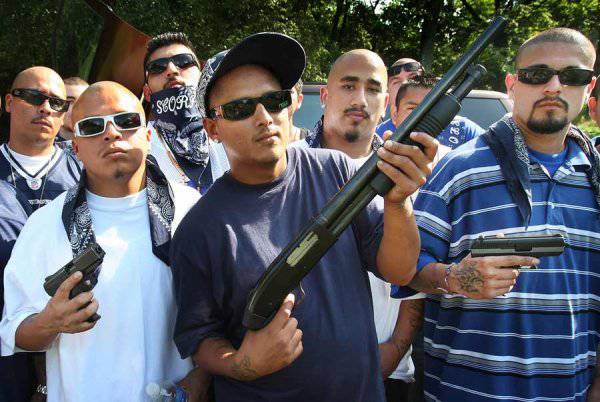 Therefore, the “law enforcement officers” are not particularly effective. Rather, the opposite. "I saw a policeman and died" - this is about America.

“... Immediately right without words - a bullet in the forehead, that's all. We, thank God, have not grown to such a democracy yet ... ”

All right Let's not “grow” in this direction. We have already peredelul too much bad from the West and threw too much good Soviet.

Ctrl Enter
Noticed oshЫbku Highlight text and press. Ctrl + Enter
We are
Results of the week. "The revolvers themselves will be ..."With a revolver, but without a kind word
79 comments
Information
Dear reader, to leave comments on the publication, you must to register.