Marines of the Russian Navy will receive robotic combat platforms 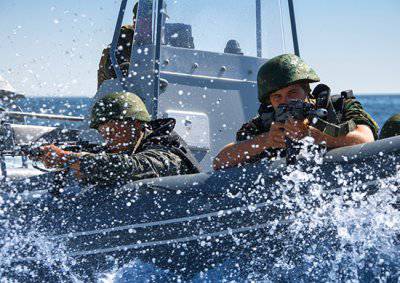 Robotic rocket complexes weapons and highly mobile amphibious vehicles will go into service with the coastal naval forces fleet 25 years later, Interfax-AVN reported with reference to the chief of the coastal forces of the Russian Navy, Major General Alexander Kolpachenko.


“In the long term, for the period up to 2050, it is planned to create a highly mobile amphibious combat vehicle to support the actions of the marines in all regions and climatic conditions, including in the Arctic zone,” said General A. Kolpachenko on the occasion of the 308 anniversary of day of the creation of the domestic regular marines.

According to him, in the Navy, work will be carried out on the creation of robotic combat platforms of the marines, using various sources of energy for the operation of the engine.

“Before 2050, robotic rocket weapons complexes capable of using weapons on various physical principles, with the ability to hit enemy targets in various environments - air, underwater and in outer space, should be commissioned by coastal forces,” added the head of the coastal forces of the Navy.

Ctrl Enter
Noticed oshЫbku Highlight text and press. Ctrl + Enter
We are
Kolpachenko: marines must comply with the constantly changing environment in the seas and oceansA special kit that enhances the amphibious capabilities of the tracked M113 BTR
16 comments
Information
Dear reader, to leave comments on the publication, you must to register.