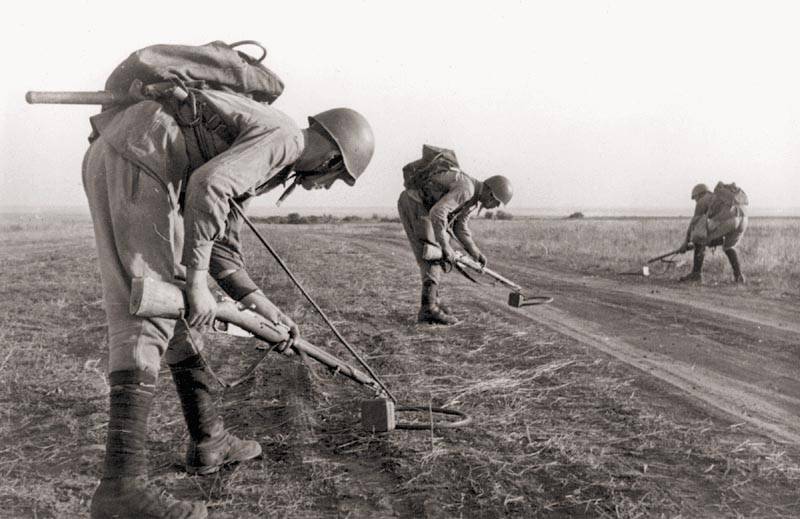 One of the main combat vehicles of engineering troops in all armies of the world is mine explosive obstacles (MVZ). They are constantly being improved, seeking to achieve the greatest efficiency.


We made extensive use of the cost centers during the Great Patriotic War, but, starting from 1943, the German troops, retreating to the west, began to use them en masse. In addition to the usual standard schemes of mining, in both armies began to spread new methods of using mines, land mines, called mine traps, surprises.

From official sources of the time it is known that a mine trap was called any mine when an explosive charge installed in a certain place, when trying to move it (move), exploded. Most often they were installed as single landmines (mines) in the most unexpected places: in houses, structures, in everyday objects, weapons etc.

To counteract the advance of the enemy troops, by order of the Supreme Command, in the rear began to build state defensive lines, in particular anti-tank ditches. However, their combat effectiveness was far from consistent with the efforts expended on the construction.

Then a new solution appeared: replace ditches with anti-tank traps. They were pits, slightly larger than the dimensions tanks, at the bottom of which were placed Molotov cocktails. On top of the pits were overlapped by light masking flooring. They were successfully used on the South and North Caucasus fronts. 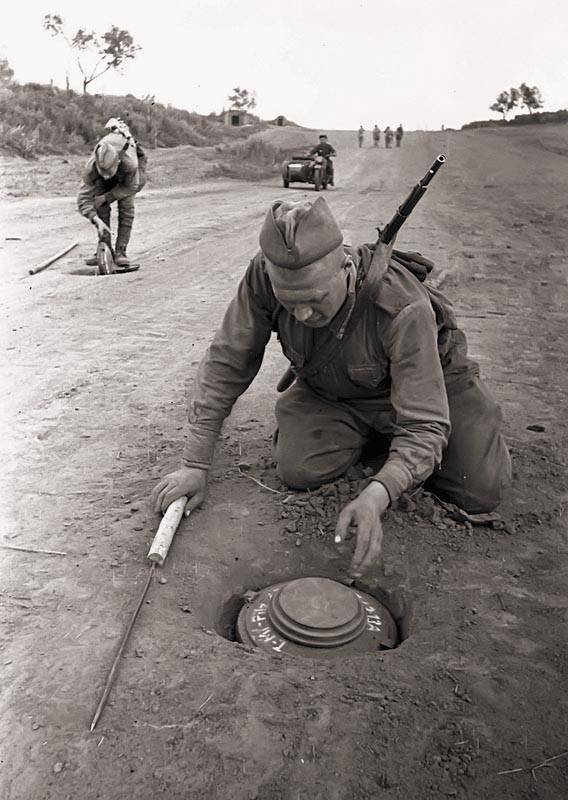 In the battle of Moscow against the German tanks that had broken through, in the direction of the Golitsino station, a shaft of straw, boughs, and brushwood was poured over a half-kilometer stretch and poured with fuel. With the approach of the enemy shaft set on fire. As a result, the enemy reversed and suffered losses from the fire of our artillery. As reported, from 40 tanks were destroyed 25.

During the fighting in human settlements, especially within narrow streets, mine barriers were successfully used. With the advent of enemy tanks, several anti-tank mines connected by a cable or attached to boards and located along the houses were deployed across the street, directly in front of the enemy. The effect of unexpected explosions brought good results.

The experience of our engineering troops gives many other examples of mine traps, surprises. Especially often they were used by reconnaissance and sabotage groups in partisan detachments. They used both home-made and technical means (a technique of special secrecy - TOC). There are a lot of materials about this in the press, including the memoirs of Colonels I. Starinov, B. Epov, A. Ivolgin and other veterans of the engineering troops. In this article, we will mainly discuss the actions of military sappers.

We will give just some examples of interest even now, when bloody battles are taking place in several areas of the world, various surprises from the area of ​​mine-explosive barriers are used. The experience of the past has not lost its value for the present generations. We will know more - we will be less mistaken.

During the war years, in order to protect the troops from losses, the headquarters of the engineering troops of the fronts and armies published information materials (leaflets, bulletins, albums) showing the techniques of laying mines.

Thus, the headquarters of the engineering troops of the Leningrad Front in 1944 published a special album, which contains specific examples of the use of mine-surprises by the Germans.

Most often, the German sappers left mines surprises stretch action. In the territory freed from the enemy, abandoned weapons were found: pistols, machine guns, machine guns. And often from some minor detail was a thin wire with a length of 1 – 2 m, which was connected to the check of the fuse inserted into a masked explosive charge. Any attempt to take advantage of this trophy threatened with death.
Here are other examples.

On the side of the road lay a backpack filled with something. After carefully examining it, the sappers discovered a mortar round inside an 81-mm mortar with a tension action fuse inserted. The rise of this backpack threatened to explode. 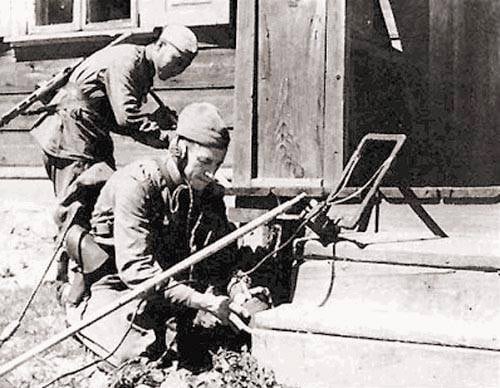 In one of the houses near the Russian stove lay the usual firewood. During their inspection, it turned out that a cord connected to a mine fuse was tied to one log.

And in the cleared dugout, a land mine was found, the grating fuse of which was connected with a wire to a deminer shovel standing next to the pole. Tried to take a shovel - as a result of an explosion.

In the press of that time it was reported that in the dilapidated house of the writer Serafimovich they found a high-explosive shell, hidden in the chimney of the kitchen stove.

In the school building on the desk lay a pile of books. On closer inspection, the sappers found wire under the pile of books leading under the floor to the fuse.

Very often in the houses (under the stairs, floorboards) installed mines, surprises pressure action, which worked under the weight of a person.

In the house of the liberated village of Tuganitsy, several bricks were removed from under the furnace, and instead of them two T-35 mines were laid with screwed fuses. Ash hid the traces of the "operation" ...

The author of the article had to familiarize himself with the liberation of the Kuban with the new method of installing a mine bomb. After the liberation of the village of Petrovskaya, a lot of equipment passed through the center of the city. The road was checked by our platoon. But on the second day an emergency happened - a tank was blown up. We re-checked the road, but we did not find mines. And nevertheless my commander sergeant A.Alyabyev did not calm down. Again and again he explored every shred, suspicious places along the road. Finally, he came across a wooden stake, protruding from the ground, disguised with a tuft of grass. When the earth layer was carefully removed, it turned out that at the meter depth this stake rested on the fuse of a paired German mine.

Of course, neither a probe nor a mine detector can detect such a mine. The sergeant was then awarded the medal "For Military Merit." By the way, the Germans used similar techniques on other fronts. 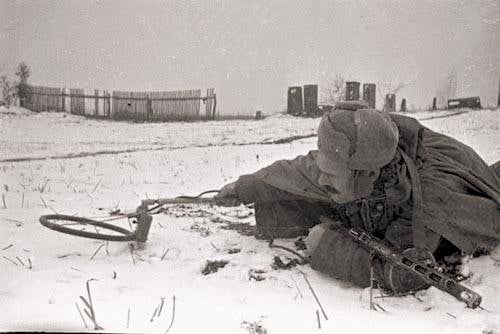 During the last war, we, the sappers, faced more than once cases when the Germans turned into traps even the corpses of their soldiers. In the houses often mined children's toys. (After WWII during numerous wars and conflicts, these techniques were usually used by all types of irregular military formations).

Often in the captured piles of artillery ammunition, engineering mines were caught allegedly carelessly installed traps, which were set up with the aim of hiding carefully camouflaged, lulled vigilance of the sapper.

The enemy did not disdain anything. According to the headquarters of the engineering troops of the Karelian Front, in a liberated village in one of the houses they found a cat in a box covered with a lid. When the sappers entered the house, the cat mumbled. An attempt to lift the lid ended in an explosion.

War is war. The means of their use, as shown by the events of recent wars, including in Afghanistan and the Caucasus, are constantly being improved. However, past experience can not be forgotten.

Ctrl Enter
Noticed oshЫbku Highlight text and press. Ctrl + Enter
We are
How to overcome the German mine blast barriers during the warBlack Sea "land mines"
34 comments
Information
Dear reader, to leave comments on the publication, you must to register.