November 28 2013
51
In the 1980-ies in the USSR was created weapon Cosmonauts' self-defense - a hunting non-automatic 3-barreled pistol TP-82, which became part of the special SONAZ complex (small arms of a portable emergency reserve). The initiator of the creation of special small arms for domestic astronauts was Alexei Leonov. In 1979, a famous Soviet cosmonaut visited an arms factory located in Tula. There, he told the gunsmiths that astronauts who landed in 1965 on the territory of the Perm Region from the Voskhod-2 spacecraft lost contact with the search group. As a result, the astronauts were forced to wait a whole day for help. Astronauts were searched using helicopters.


All this time, which they spent in the winter forest in deep snow, could be their last. In the Perm forests there are a large number of different predatory animals that could attack people. At the same time, cosmonauts had absolutely nothing to protect themselves. Then Leonov noted that if the astronauts had a special multifunctional weapon, they could feel more confident in the winter forest. In 1981, the idea of ​​Leonov, who at that time was already not just the first cosmonaut to go into outer space, but also the deputy head of the Cosmonaut Training Center, quickly found official support. Already in 1982, the TP-82 pistol was officially accepted for the supply of Soviet space missions.

TP-82 was designed to ensure the survival of astronauts and crews of long-range aircraft aviationwho landed outside a given territory in the wild. TP-82 is a non-automatic three-barrel hunting gun. Its main purpose is to protect astronauts from dangerous forest animals, as well as criminal elements, weapons can be used for hunting by means of hunting, as well as giving visual signals of visual observation if the descent vehicle has landed or splashed in a sparsely populated, uninhabited area. The pistol has 2 horizontal upper smooth trunks of the 32nd hunting caliber and a 5,45 mm caliber rifled barrel located under them.

The pistol was developed by the Tula Arms Plant, and the creation of ammunition for it was carried out by the Central Scientific Research Institute of Precision Engineering, located in the city of Klimovsk. The first domestic spacecraft that included this pistol complex was the Soyuz T-6, which was launched into space in the summer of 1982. After 4, the TP-82 pistol was also adopted by the USSR Air Force, and it was planned to use it as a survival weapon for long-range pilots who were forced to make an emergency landing. The release of the weapon was stopped in the 1987 year. According to the information that is available in the public domain, TP-82 non-automatic pistols were part of a wearable emergency stock of Soviet and then Russian spacecraft up to 2007 of the year. By this time, the storage period for ammunition for weapons, which were released back in the USSR, has expired.

Cosmonauts survival weapon TP-82 is a non-automatic pistol. The barrel unit pistol consists of 3-x barrels. The two upper ones are smooth-bore; they are intended for the use of 32 hunting cartridges of a caliber, the lower one is threaded, and is intended for the use of a cartridge 5,45х40 mm. The lower barrel of the gun has a special adjustment device, which consists of 3-x screws (one on the bottom and 2 on the sides) and is designed for shooting. Smooth pistol barrels have an ordinary extractor, which moves back when the barrel unit is tilted under the influence of 2's pins, which are located on the inner side of the pad on top of the pads. The lower barrel of the TP-82 pistol has a spring ejector, which is triggered by pressing a special button, which is located on the receiver unit on the left side, below.

The TP-82 pistol is reloaded with the help of a “blocking” of a barrel block (like in hunting rifles); the barrel latch has the shape of a long lever, which is horizontal in the left position above the pistol grip. In order to open the block of trunks, it is necessary to push the lever to the left. The gun is equipped with a trigger mechanism, it is non-self-cocked, has an 2 openly located trigger. 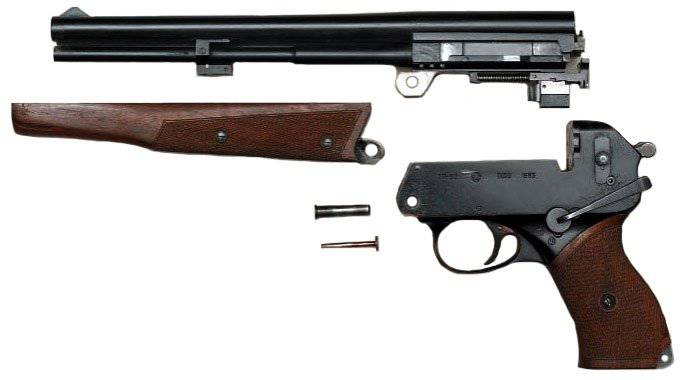 The right trigger of the pistol serves the right “smooth” barrel, the left trigger can freely switch between the lower rifled and the left “smooth” barrel, for this purpose there is a vertically moving switch on the frame on the left side. On a number of samples of the TP-82 pistol, an automatic fuse was installed, made in the form of a key on the handle located under the trigger guard. Sight adaptation of the gun of open type, fixed. In order to improve the accuracy of firing from a weapon, it was nominally staffed with a removable butt, which was loosely attached to the bottom of the pistol grip. This butt was also a specially designed machete with a trapezoidal blade, enclosed in a semi-rigid sheath. For firing machete in a sheath attached to the TP-82, at this time the lower part of the sheath to play the role of the butt plate.

Weapons used specially designed in TsNIITOCHMASH. PF Sazonov was the leader of the works on their creation. The developed ammunition kit included an 3 cartridge. The first of them was a fractional SP-D (created on the basis of the hunting 32 caliber). The 12,5x70-mm fractional cartridge in a brass sleeve was equivalent to the standard 20-caliber hunting rifle cartridge (15,9-mm) with fraction No.3, which was used in hunting rifles with 700 mm barrel length. Signal cartridge SP-P was also designed on the basis of hunting (signal cartridge with one red "asterisk"). It was significantly superior to the previously used 15-mm cartridge 7-8, first of all in the time of burning the signal checker. The bullet cartridge was designated as SP-P. It consisted of a semi-subunit bullet 5,45x40-mm, having a steel core and a special hole in the spout to increase the expansive effect. The vastness of the defeat with the help of such a cartridge in 8-10 times surpassed the performance of the bullet of an automatic cartridge 7H6 caliber 5,45-mm.

The effective firing range of these TP-82 pistol cartridges reached 200 meters using SP-P and 40 meters when using shot. The standard weapon ammunition included an 31 cartridge: 10 cartridges SP-D and SP-S, as well as 11 cartridges SP-P, which were placed in a special canvas pouch. In the design of all these munitions, measures were implemented aimed at ensuring the operability and preservation of their tightness even after a relatively long stay in a vacuum under low pressure. 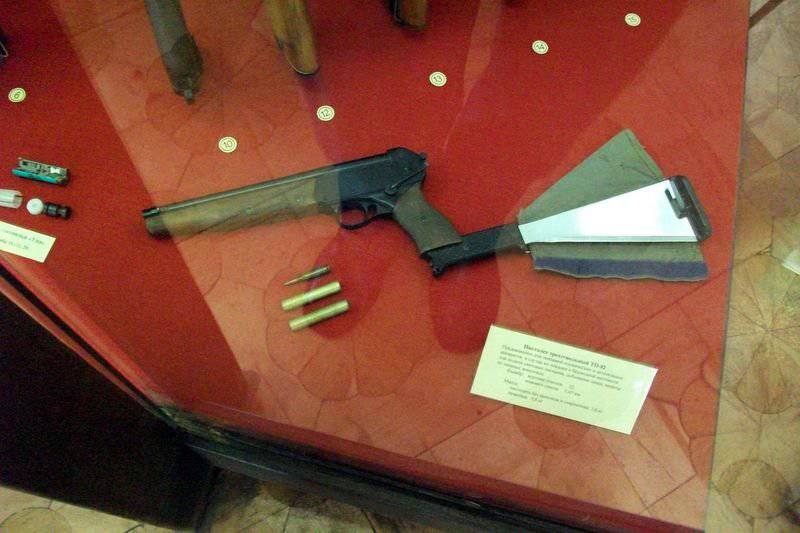 The gun was actively tested as a means of hunting. With the help of smooth trunks it was possible to hunt small animals, such as a hare or a fox, as well as a huge number of birds - from partridges to black grouses and wood grouses. With the help of a rifled trunk, it was possible to shoot wild boars, mountain goats, saigas, gazelles, small elks with an animal weight up to 200 kg. At the same time, the SP-S signal cartridge turned out to be the most effective means of signaling by the parameters of visual observation at that point in time (when compared with all existing means).

Of course, if landing in the taiga, the TP-82 pistol would be a significant help for astronauts. The removable butt of the pistol, which also served as a machete, did an excellent job with its work. According to the head of cosmonauts training sessions Alexander Hermann, there were cases when a number of cosmonauts for two days of survival (training in the winter forest have such a duration) cut several cubic meters of wood to provide themselves with firewood and build shelters.

TP-82 pistol gave the impression of a durable, reliable and well-made product. Such elements as the holster, machete case, cartridge belt, had the minimum weight. The controls were comfortable, and the manipulations with them were logical and simple. The safety devices on the gun ensured safe handling of the weapon, including when the weapon fell or when the receiver unit was not completely locked. Experts noted a soft descent, a good balance of the model and a “snatch” handle. Shooting from it could be carried out with an attached butt-machete, and without it. Without attaching the butt, it was best to fire with shot-up or signal cartridges. 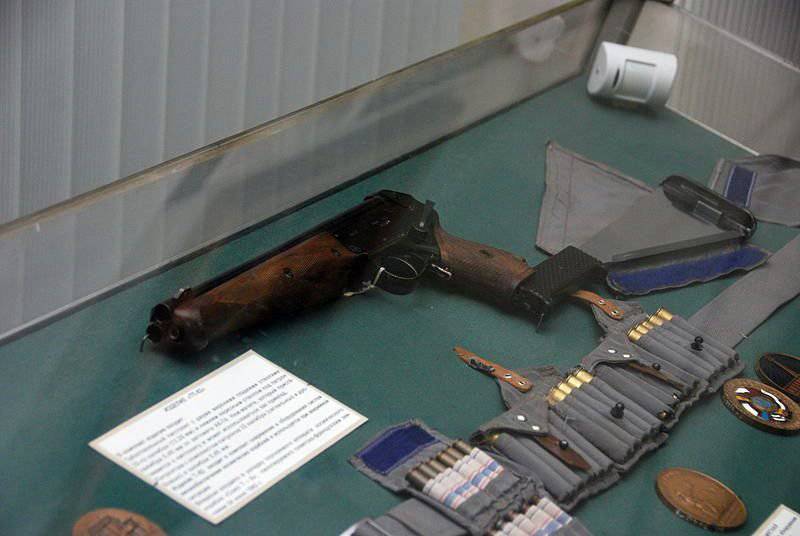 The TP-82 pistol was adopted in the 1986 year, and in the same year it flew into space for the first time. They were armed with Soviet cosmonauts from the joint Soviet-French crew. His release was discontinued at the end of the 1980's. Officially, for the reason that the manufactured pistols were enough, and their further release was impractical. However, according to the Tula gunsmiths, the lack of funding was to blame. According to various data, they managed to collect “X-ray” pistols from 30 to 100 during Tula’s production. Currently, everyone can see rare weapons in the artillery museum of St. Petersburg, the state arms museum of the city of Tula, and as part of the exposition of the memorial museum of cosmonautics in the Russian capital.