Scotland on the road to independence

November 28 2013
46
Edinburgh is seriously counting on the success of the independence referendum, which will make it possible to create an independent state in 2016. November 26 in Scotland unveiled an 670-page independence plan ("White Paper"). "Most important in stories the nation over the past 700 years "the document aims to reverse public opinion in this region of the United Kingdom. Until now, those wishing to remain under the rule of the British crown are little more than supporters of independence. So, according to the latest polls, 38% of Scots support complete independence, while 47% want to stay in the United Kingdom. Among the opponents of the branch is dominated by supporters of broad autonomy. According to experts, the chances of secession of Scotland are small, especially if for the period remaining before the referendum something exceptional does not happen. Most likely, the Scottish separatists will get rid of another concession from London. 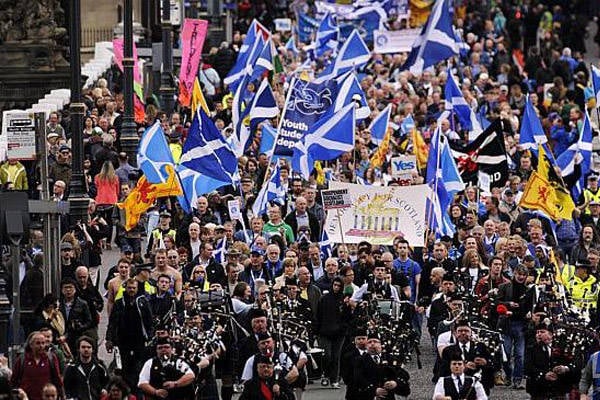 The referendum is scheduled for September 18 2014. There is only one question in the document: “Should Scotland become an independent country?” There are only two answers: “Yes” and “No”. If it is successful 24 March 2016, the Scottish state will appear on the political map of the world.

March 24 date is not chosen randomly. On this day, 1603 was concluded by the "Union of Crown", which united England and Scotland into a dynastic union. In 1603, Queen Elizabeth I died, and the Scottish king, James VI, became her heir. Dynastic union rules between the two states in the period from 1603 to 1653 year (when the monarchy was officially abolished), and from 1659 year to the unification of the two countries in 1707 year. England and Scotland at that time were headed by one monarch, but formally remained independent states. During the dictatorship of Oliver Cromwell, the complete state merger of England and Scotland was announced, but under Charles II Stewart, Scottish sovereignty was restored. In 1707, the Union Act came into force. England and Scotland merged into a single state - the UK.

Until now, the main argument of the opponents of Scottish independence was that the nationalists in power did not know what to do with freedom in the event of independence. The document entitled “The Scottish Future: Your Guide to Independent Scotland” gives a detailed answer to this question. The head of the Scottish government, Alex Salmond, promises to build a more equitable state after independence. In his opinion, Scotland will take 8-th place in terms of GDP per capita among the 34 countries of the Organization for Economic Cooperation and Development. For comparison: England will occupy the 17-place. Independent Scotland will create a national armed forces, its own tax system. Large hydrocarbon reserves and a relatively small population (5,2 million) will make it possible to successfully develop the economy for half a century.

Earlier, the British Ministry of Finance warned that in the event of the separation of the northern region of Great Britain, the annual income tax for each Scotsman could increase to 1 thousand euros. The Scottish government has assured that this will not happen. Moreover, the authorities will cancel the so-called. "Tax on the bedroom", which is charged to the owners of apartments, where living rooms more than family members. The Scots promised to increase pensions, reduce energy costs and improve the system of preschool education. The government also plans to save money on the closure of the Faslin nuclear submarine base in the Gar Lough Bay at the mouth of the Clyde River and the nuclear arsenal weapons in the nearby bay of Loch Long. I must say that the question of the elimination of the submarine base is very annoying to London. Build a new base is too expensive, and time is needed. There was even a proposal to declare the base a sovereign British territory, following the example of the British bases in Cyprus. This message caused an uproar in Edinburgh.

However, the Scottish authorities do not want a complete break. In particular, the Scottish Prime Minister said that the new state plans to remain in the zone of the British pound sterling and retain membership in the European Union. True, the Secretary of State of the British Government for Scotland, Alistair Carmichael, said that Edinburgh would likely have to leave the pound zone, becoming independent. The idea of ​​a monetary union with independent Scotland is in doubt. British Foreign Secretary William Hague said that the withdrawal of Scotland from the United Kingdom will also lead to the withdrawal of organizations of which the United Kingdom is a member, including the European Union. European Commission President Jose Manuel Barroso actually played alongside London, saying that if Scotland declared independence, Edinburgh would have to apply for EU membership and hold bilateral talks with each EU member. Clearly, including the UK. Thus, London warned Edinburgh about the consequences of the gap. Another negative consequence is the deterioration of security. Scotland will have to form the armed forces and special services, and this will not be done in one month.

According to the Scottish authorities, Scotland will remain in the zone of free movement that currently operates between Britain and Ireland, which will minimize the frontier formalities on the territory of the former United Kingdom. Salmond positively looks at the accession of Scotland to NATO. On the question of the form of government, the prevailing view is to remain in the British Union, that is, the British monarch will continue to be the formal head of Scotland, as in Australia, New Zealand and Canada. The question of the abolition of the monarchy and the approval of the republic is secondary to the issue of independence. They say that we will get independence, and then we will look into the question of whether a republic is necessary or not.

It should be said, at the household level, the British and the Scots dislike each other. The Scots remember the centuries-old confrontation, the victories of King Robert I Bruce, the leader of the Scots in the war for independence from England, William Wallace is revered as a national hero. The British emphasize that Scotland is a chronically subsidized region, let it be said to be rolling. In particular, in the UK, they advocate secession of Scotland up to 32% of respondents, they are mainly supporters of the Liberal Democrats and Labor. Conservatives against secession of Scotland.

The idea of ​​restoring independence to Scotland has been cultivated since the middle of the XIX century. In 1934, the Scottish National Party was established. She remained for a long time on the outskirts of political life. Only in the 1970-ies the idea of ​​independence gained an economic basis - they began to develop hydrocarbon production infrastructure off the Scottish coast on the shelf of the North Sea. The national party has significantly strengthened its position. However, all attempts to create a separate Scottish parliament failed. Only in the 1997 year, when the Labor Party, wishing to get the support of the Scots, put forward the slogan of reconstructing the Scottish parliament at the national elections, this step was taken. The government of Tony Blair agreed to a new referendum, and supporters won the creation of a separate Scottish parliament. In the spring of 1999, elections and the opening of the Scottish Parliament were held.

In 2007, the National Party won a majority (47 of 127 seats) in the Scottish Parliament. In 2011, success was consolidated - 69 from 129 locations. Having formed a coalition with the Scottish Greens, the SNP received the right to form an executive branch. The first minister was the leader of the National Party, Alex Salmond. One of his first steps in this post was a proposal to hold a referendum on the independence of Scotland in 2014.

A feature of the Scottish National Party is that its political platform is based on European Social-Democracy. Scottish nationalists are not associated with a wave of anti-migrant and Islamophobic sentiments in Europe. The SNP, on the contrary, emphasizes the commitment to the idea of ​​multiculturalism and does not support London in its policy of “tightening the screws” towards migrants. Scottish nationalists emphasize that they are in favor of the development of multiculturalism policies. The party actively supports people of other nationalities and religions. So, the Muslim Humza Yusaf even went to the second number in the party list in the last election. In this regard, Scottish nationalists are part of European social democracy, which has strong positions in the bureaucracy of the European Union. Their nationalism is in confrontation with London, not in restricting the wave of migrants. On the other hand, in Scotland, there is no serious problem with immigrants. The Scots are up to 88% of the population of this region of the United Kingdom, another 7% - the British. Irish, Poles, Pakistanis, Indians, Chinese, and Afro-descendants are a small minority.

The benchmark for Scottish nationalists is Scandinavian countries. The ideal for them is the Scandinavian model (the Swedish model) with its idea of ​​the “welfare state”, large state redistribution of national wealth, extensive social benefits, low corruption, strong trade union movement, developed partnership between employers, trade unions and the government, high costs for education and medicine, etc. Already in Scotland, unlike in England, higher education is completely free, medical services are more accessible, etc. However, the SNP considers that this nly the beginning, and accuses London that he puts a spoke in the wheel in the process of building "socialism of the Scottish." In particular, Edinburgh is not allowed to introduce a progressive tax scale, not allowing to distribute income from the rich to the poor. Another serious separatist claim to London is that Scotland gives to the UK budget more than it gets back. This already brings the Scottish nationalists together with other European separatists, for example, Catalan.

The proximity of the National Party to the social democratic movement emphasizes their alliance with the Scottish Green Party and the Scottish Socialist Party. They are the main allies of the nationalists on the secession of Scotland. Scotland itself is traditionally a left-wing region, for a long time it was the stronghold of Labor. Conservatives advocating the unity of the United Kingdom and right-wing economic policies have no strong position in Scotland.

Ctrl Enter
Noticed oshЫbku Highlight text and press. Ctrl + Enter
We are
The era of separatism: does Scottish independence scare?Scotland: separation from rotting England?
46 comments
Information
Dear reader, to leave comments on the publication, you must to register.