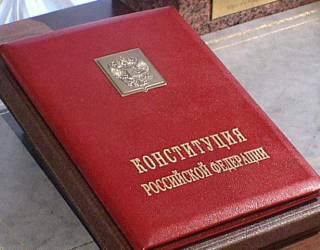 12 December of this year The Constitution of Russia celebrates its twentieth anniversary. The date is round, and therefore some legislators have already decided to mark it especially. They are going to celebrate on a large scale, and with the people involved, for which it is again proposed to make December 12 a day off.
It must be recalled that this day was a holiday in the country from 1994 to 2004 year. In 2004, the authorities came up with the idea to move the day off from December 12 to the New Year holidays, adding a few more days off here - for example, from May 2. After that, the New Year holidays for those working in the public sector became a real additional holiday, having increased by about 3-4 extra weekends. In some years, the New Year "holidays" in the country continued from 1 to 9 in January. Often, such long holidays, the former head of the Federal Service for Consumer Rights Protection and Human Services (he is the former sanitary inspector), Gennady Onishchenko, was called a "drunk decade."
This year, deputies have already expressed the initiative to reduce the number of January holidays. At least one day they planned to postpone it to Cosmonautics Day, making it a day off. If the “constitutional” holiday returns, then the New Year holidays for public sector employees may be reduced to 2 of the day.
By the number of various transfers of holidays and weekends, games with time and the revision of the "red" dates, our country is among the leaders in the world. At the same time, changes occur not only when a radical change of power is observed in the country, what else could be explained, but also when the power does not change.
Who wins, and who loses from such transfers and revisions? If we consider that each transfer of a holiday or a weekend allows certain business circles to earn good money, then the interest of these circles becomes understandable. On new calendars and other printed products alone, you can earn a lot. In this regard, the thought suggests itself whether those representatives of the deputies corps, who occasionally have the idea of ​​revising, renaming, redistributing, and other such things, have no indirect relation to this kind of business.
Ctrl Enter
Noticed oshЫbku Highlight text and press. Ctrl + Enter
We are
Christmas gifts for children Novorossia. Part of 2. Report №13Does Russia need a new constitution?