Aircraft carrier for the Russian Navy: opportunities, suggestions and suggestions

November 28 2013
198
On the morning of November 26, the new Indian aircraft carrier R33 Vikramaditya of the 1143.4 project left the waters of the Sevmash plant (Severodvinsk) and headed for Murmansk. There the ship will stay for several days, after which it will go to the place of service in India. It took a little less than ten years to repair and modernize an aircraft carrier that previously had the name “Admiral Gorshkov”. So, the contract was signed on 20 on January 2004 of the year, and the transfer of the ship to the customer took place on 16 on November 2013. Despite the relatively long duration of work, the implementation of this project has received mostly positive reviews from both the Russian and the Indian side. In recent months, an interesting opinion has been featured in the media, expert statements and numerous discussions. According to him, the successful completion of the repair and modernization of the aircraft carrier Vikramaditya shows the capabilities of domestic shipbuilding. This means that the Russian defense industry is able to build new aircraft carriers. 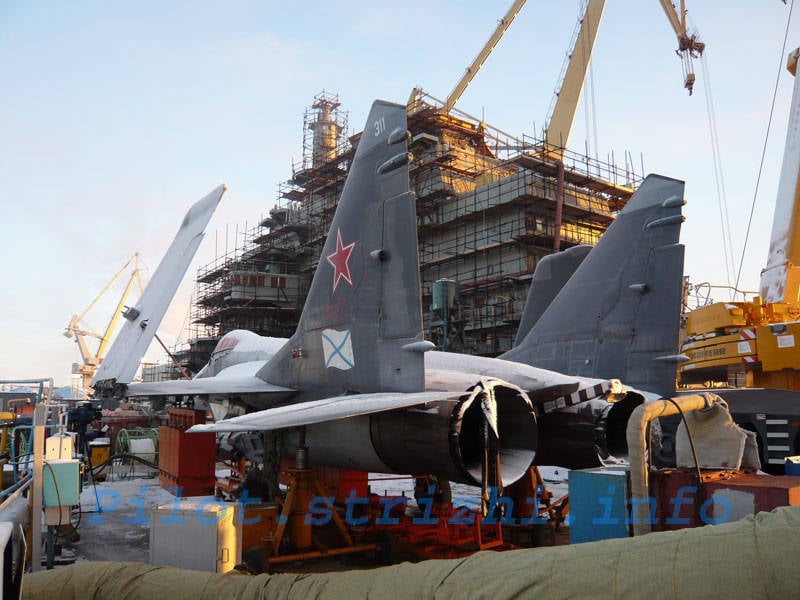 Indeed, in the course of the implementation of the Russian-Indian contract, the domestic industry carried out a lot of complicated work, which can be considered a kind of indicator of readiness for the construction of aircraft carriers. However, in the near future, the navy of Russia will not receive ships of this class. The current state armament program, calculated up to 2020 of the year (GVV-2020), does not provide for any design or construction of aircraft carriers. Deputy Minister of Defense Y. Borisov recently noted that the lack of a program to build aircraft carriers in the LG-2020 is primarily due to the country's financial capabilities. At the same time, Borisov did not rule out that in the second half of the current decade or in the twenties, the military would again consider the creation of new aircraft carriers.

Soon after the transfer of the R33 Vikramaditya to the customer, Russian Deputy Prime Minister D. Rogozin made several statements regarding both the contract with India and the prospects for building such ships for the Russian Navy. According to Rogozin, now the presence of new aircraft carriers is not a matter of defense, but is associated with geopolitics. Thus, while the Russian fleet does not need ships with aviation over the next few years, the only available aircraft carrier “Admiral Kuznetsov” will be enough for him as a group.

As we see, the leadership of the country and the military department still does not see the point in immediately starting work on creating new aircraft carriers, although it does not exclude the implementation of such plans in the future. It is worth noting that this point of view did not appear today and not yesterday. For example, almost a year ago, the Commander-in-Chief of the Russian Navy, Admiral V. Chirkov, spoke about the possible start of the construction of aircraft carriers after 2020, as part of the following state armament programs. According to the admiral, the potential should be increased in the next decade. fleet due to the construction of fourth-generation multipurpose nuclear submarines, modern warships of the near, distant sea and ocean zones, as well as promising aircraft carriers as part of the aircraft carrier complex. It was noted that the experience of local conflicts of recent years, in which the carrier-based formations were actively involved, was in favor of a similar strategy for the development of the Navy.

A modern aircraft carrier, acting as part of a naval compound (other methods of combat work of such ships have not been considered practical for a long time), should solve several tasks at once. These tasks are directly related to the presence of an aviation group on board, including a mixed train (fighter-bombers, airborne early warning aircraft, anti-submarine helicopters, etc.). The modern aircraft carrier is designed to provide air defense of the naval connection by the forces of the air group; to provide air strikes on ships or ground targets of the enemy; and also to cover areas in which there are submarines with strategic missiles. From this one should make a start in determining the appearance of a prospective ship, taking into account the peculiarities of hypothetical conflicts in which it should take part.

In July of this year, the discussion of a promising Russian aircraft carrier flared up with a new force. The reason for this was the layout presented at the IMDS-2013 exhibition, created by the FSUE “Krylov State Research Center” (formerly the Krylov Central Research Institute). Employees of the research center are working on a project of a promising aircraft carrier, and in accordance with this project a model was assembled. Naturally, so far this project is only one of the versions of what a promising Russian aircraft carrier will look like, but one cannot but admit that it is consideration of several options that will allow choosing the best one.

The proposed project involves the construction of a heavy aircraft carrier with a displacement of about 80 thousand tons. The ship is proposed to equip the launch pad and arresting gear, which makes it look like the aircraft carrier currently in use "Admiral Kuznetsov." The new aircraft carrier is supposed to be equipped with a non-nuclear power plant capable of providing maximum travel speed to 30 nodes. Air group declared in 40 airplanes and helicopters of several types. For self-defense, the ship must receive several anti-aircraft missile systems.

Perhaps the most interesting part of the project is its intended financial component. The total cost of the development and construction program is estimated at 400 billion rubles, 80 of which will go directly to the construction of the ship. Thus, a promising domestic aircraft carrier is about three times cheaper than the last American ships of the Nimitz project. At the same time, however, it should be noted a noticeable loss both in size and in the number of aircraft and helicopters.

As we see, in the near future a similar project cannot be implemented for financial reasons. A program worth about 400 billion rubles - even if the allocations are divided and “stretched” for several years - will make a tangible hole in the defense budget. So far, our country is not ready for such spending, especially in the light of the incomprehensible role of a promising aircraft carrier in the modern structure of the navy.

Most likely, the new Russian aircraft carrier will be significantly larger than the existing Admiral Kuznetsov spacecraft. The proposal of the staff of the former Central Research Institute. Krylov looks viable and logical. Therefore, the displacement of a promising aircraft carrier should be estimated at 70-80 thousand tons. Domestic designers are likely to actively use the existing experience, but they will have to apply several new solutions that will make the new aircraft carrier different from Admiral Kuznetsov. First of all, this power plant. Over the past decades, the world has spread the view that a modern aircraft carrier should have a nuclear power plant. This view is supported by a number of technical and operational arguments. Among other things, a nuclear reactor will get rid of large fuel tanks, as well as reduce the volume allocated to the various elements of the power plant.

The growth of the internal volume of the hull, which can be achieved not only by increasing the ship, will increase the size of the air group and the volume of fuel or weapons for it. Recalling the aircraft-carrying cruiser "Admiral Kuznetsov", it is worth noting that there is no need for anti-ship missiles. As shown by calculations and practice (including the experience of foreign countries), it is enough for an aircraft carrier to carry only anti-aircraft weapons. To fight with the enemy ships must aircraft or escort ships. The refusal to equip the aircraft carrier with anti-ship weapons will allow the release of additional volumes inside the hull.

It is early to discuss the quantitative and qualitative aspects of the aviation group of a prospective aircraft carrier. If the construction of such a ship starts only at the beginning of the next decade, then plans for the types of aircraft and helicopters that are supposed to be based on it can change several times. In such a context, the model of an aircraft carrier looks like an interesting one, authored by the Krylov State Research Center, on which models of the hypothetical deck-based version of the T-50 fighter were observed. Perhaps by the end of the construction of a new aircraft carrier such aircraft will be ready, but still it cannot be excluded that during the first years of service it will be a floating airfield for existing MiG-29K. Accordingly, without knowing the type of the proposed technology, it is impossible to talk about its quantity. Probably, an aircraft carrier, the appearance of which we are now trying to guess, will receive an air group of at least 40-50 airplanes or helicopters.

Such an alleged appearance of a promising aircraft carrier resembles the 1143.7 project, according to which the Ulyanovsk ship was built in the late eighties, but it has a number of differences. "Ulyanovsk" was larger and heavier than "Admiral Kuznetsov", had a larger air group, but at the same time had to carry about the same weapons, including anti-ship missiles "Granit". Due to the collapse of the Soviet Union, an unfinished aircraft-carrying cruiser was dismantled on a slipway. Some of the nuances of the 1143.7 project are still relevant, which is why a number of developments on this project can be applied in the future.

The current program of procurement of new weapons and military equipment is designed to 2020 year, and there is no room for a new aircraft carrier. Nevertheless, in such programs of the future, corresponding points may appear, thanks to which in the next decade the Russian Navy will be able to receive a new aircraft carrier or even several ships of this class. In the meantime, domestic shipbuilding has other tasks, the implementation of which will allow in the future to begin the construction of aircraft carriers. Over the next few years, the Navy should receive 14 frigates of 22350 and 11356 projects, 15 corvettes of 20380 and 20385 projects, as well as 8 small rocket ships of the 21631 project and a number of boats, auxiliary vessels, etc., not counting submarines . Thus, in the coming years, defense industry enterprises are loaded with existing orders and stocks for aircraft carriers can only be released in the distant future. Because of this, the military and the designers have a considerable amount of time to determine the requirements for a promising aircraft carrier and the subsequent creation of the project.