November 28 2013
46
The other day, the All-Russian Public Opinion Research Center decided to ask the citizens of Russia how they (that is, we) relate to the modern Russian army, the current defense minister and his work. The survey was able to participate 1600 people from 42 regions of the country. Despite the fact that the number of respondents from the total number of Russians is significantly less than one percent, the authors and implementers of the survey idea declare the accuracy of the results obtained. According to experts VTsIOM, the error of the conducted sociological research is no more than 3,4%.


Now it's time to turn directly to the questions asked by people and their answers to these questions.

1 Question: How would you rate the current state of the Russian army?

For the first time ever history 20% of these polls rated the condition of the Russian army as good, 53% recognized the condition as average, and 2% as very good. The bad and very bad state of RA was called 16% and 2%, respectively. 7% percent of respondents did not decide.

It turns out that a positive assessment of the state of the Russian army, according to the results presented by VTsIOM, is ready to put 22% of Russians, and negative - 18% (we omit the average estimates). The values ​​are approximately equal, if we take into account the error mentioned by VTsIOM in 3,4%.

If we compare the results of the 2013 survey of the year with the results of surveys conducted in the past years, then it is worth noting that the assessments of the state of the Russian army by the people have improved significantly. For example, in 1998, only 1% of respondents called the condition of the army good, but 81% called bad and very bad. In the 2011 year, 13% scored positively, and almost 30% scored negatively. 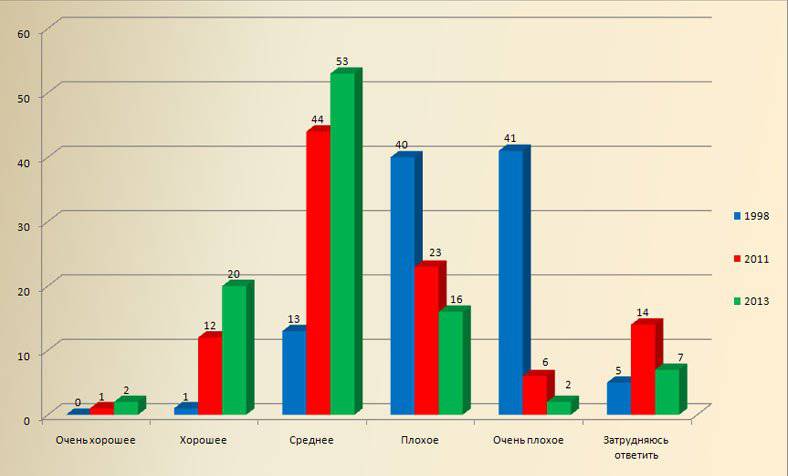 The overall percentage of those who want to keep the "delay" was 55%, and the total percentage of those who spoke in favor of refusing universal military service in Russia was 38%, with 7% undecided with the answer. For comparison, in the 1998 year, the results were almost the opposite - 55% for the contract army, 35% for the preservation of conscription service. Approximately equal number of supporters of the idea of ​​transitioning exclusively to a professional army and adherents of preserving the draft service (taking statistical error into account) were recorded in the 2006 year (49% and 45%, respectively). 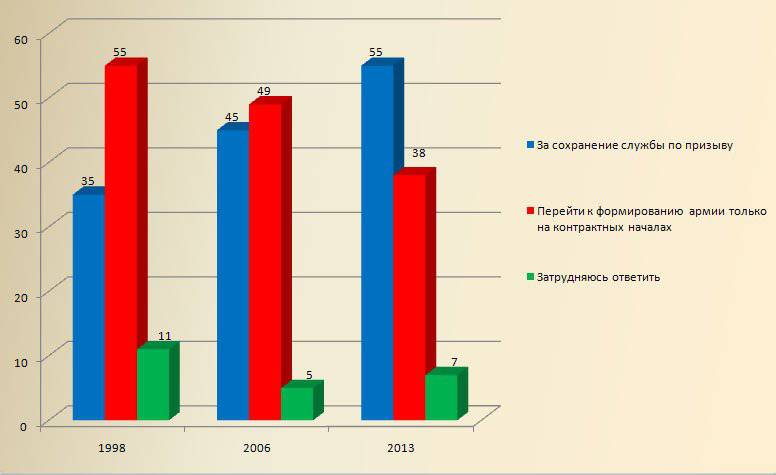 VTsIOM notes that the largest number of people who spoke in favor of canceling recruitment into the Russian army with a simultaneous transition to the 100% contractual basis corresponded to representatives of the younger generation.

The remaining questions VTsIOM dedicated to the current head of the Ministry of Defense Sergei Shoigu.

3 Question: Rate on a 5-scale, where 1 is very bad, and 5 is great, how well Sergei Shoigu copes with his duties as defense minister.

The result is the following: 3,86 points. As they say teachers: goes "well." However, it should be noted that Sergei Shoigu’s decline in the kind of “performance” compared to, for example, with September 2013. Then the respondents were asked the same question, and the average rating was 4,28, that is, a considerable percentage of those who answered the questions put the “top five” to the current minister. But it is impossible not to draw attention to the fact that in February of the current year Shoigu's “rating” was 3,77 on a five-point scale. That is, over the past period, the growth of "performance", according to public opinion, still took place.

It is noteworthy that at the last stage of work in the Ministry of Defense, the “academic performance” of Anatoly Serdyukov (according to the VTsIOM survey results) amounted to only 3,07 points.

4 Question: What feelings do you have the Minister of Defense first of all (could you give 2 an answer, for example: “it causes trust and respect”, or “it causes antipathy and skepticism”)?

As it turned out, Sergey Shoigu evokes a feeling of indifference in 9%, in 15% sympathy, in 25% confidence, in 28% hope. About 46% of respondents said they respect Shoigu. 2% said they were disappointed and disliked.
If you go back to the results of such a poll, which the same VTsIOM conducted in relation to Anatoly Serdyukov in 2011, then Anatoly Eduardovich was respected by 37% of Russians less than Sergey Shoigu is respected today. 6% of Russians trusted Serdyukov as much as 10% hoped for him (it looks like we know the names of these people ...) 38 percent of the Serdyuk respondents were indifferent ...

5 Question: Sergei Shoigu has been the Minister of Defense of the Russian Federation for a year now. Please name the most significant of his achievements, successes in this position and the most serious failures. (It was possible to give one or two answers).

The significant accomplishments of the respondents attributed the increased military exercises (7%) and the quote “bringing order to the army” (also 7%), the beginning of the arrival of new weapons (5%). It is noteworthy that the abolition of footcloths as the main positive of the work of Minister Shoigu was noted by 2% of respondents. 15% stated that there had been no achievements in Shoigu’s work during the past period of this person’s tenure.

Shoigu's failures were able to recall all 2% of people surveyed by the VTsIOM staff. The following were mentioned as failures of the minister: “I could not prevent emergencies” (1%), “there is no contract army” (1%). 52% stated that there were no failures in the work of Shoigu in the position of the Minister of Defense.

So, if we sum up the results of such a poll, we find that lately a greater number of Russians have begun to express positive assessments of the state of the Russian army and the work of the minister of defense. However, there is a considerable percentage of those who expect Minister Shoigu to expect more from the development of the army and activities in this field.

The increased positive attitude of the public towards the Russian army, its state and the minister of defense may be connected to a greater degree not even with the real steps of Sergei Shoigu himself at his post, but with what steps of his predecessor he conducts his work. At the same time, it can be said that even today Shoigu himself acts as a hostage of the attitude of the highest state authorities to the former defense minister. If the SC does not change the status of Anatoly Serdyukov, or if the court issues an acquittal verdict in the case of Oboronservis against the main defendants, then indirectly this could hurt Shoigu’s ratings. And in order that such “grazing” does not turn out to be too significant, the current minister just needs to actively work for the benefit of the Russian army. There will be such a work - people will definitely appreciate it. There will be a talk room or something good personal PR - here and with public assessments it will be more and more difficult ...