November 28 2013
7
Thailand began to boil over after people became aware that the government, under the leadership of Yinglak Shinawatra, was preparing an amnesty bill. The fact is that under this amnesty - if the project became a law - the former head of the government of the country Thaksin Chinawat would also have fallen. This man is the brother of the current Prime Minister Yinglak Chinavat and is now registered in London (received political asylum), and lives in Dubai. In the homeland, which the billionaire politician left in 2008, he is accused of corruption and sentenced in absentia to two years in prison. The opposition, who staged peaceful protests in Thailand, is sure: Thaksin is the shadow ruler of the country. Living abroad, he skillfully pulls strings there. 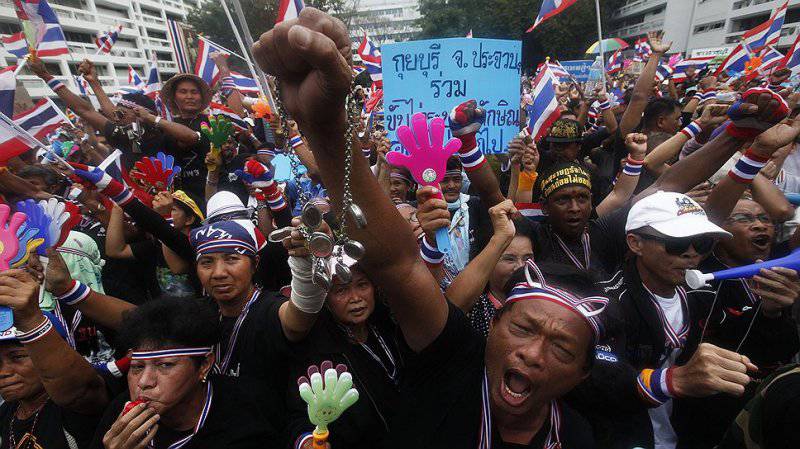 Sister Thaksin heads the Phya Thai Party (or Pya Thai, For Thailand). In 2011, this party once again won the parliamentary elections and formed a government. Apparently, it's time to lend a hand to the fugitive brother. However, the people did not appreciate the gesture of the premier.

“Our only goal is to rid the country of the Thaksin regime,” said opposition leader Suep Tagsuban (ex-prime minister of the Thai government), protesting the opposition. Against the project "Phya Thai", the Democratic Party of Thailand. She is the initiator of a vote of no confidence in the current government.

On Monday, the government introduced a special security situation before 31 December in Bangkok and the surrounding areas (some media mistakenly called it a state of emergency, and this is not the same thing: the first just precedes the second); on Tuesday morning, the court issued an arrest warrant for Tagsuban. This is not surprising: 25 and 26 in November, the Thais, who heard speakers from the Democratic Party, laid siege to the buildings of a number of ministries: finance, foreign affairs, transport, home affairs, agriculture, sports and tourism. Sutep Tagsuban, who a few weeks ago resigned from the National Assembly of Thailand to lead protests on the streets of Bangkok, called these actions "peaceful national seizure."

The anti-government march through the streets of Bangkok gathered more than 400 thousand people (government estimate; according to more modest data available in the press, only 150 thousand people took to the streets). The march was unarmed, i.e., a relatively peaceful action. The army did not intervene.

Of course, Yinglak Chinavat was ready to protest. Moreover, the Thais are not prone to aggression (at the protests they distribute flowers), and there is no obvious reason for aggression. The prime minister said she was not going to resign or dissolve parliament. In addition, on Monday she expressed willingness to negotiate with the opposition. They began the very next day. Yinglak Chinavat understands perfectly well: her party “Phya Thai” has a majority in parliament, and the Democrats will not overcome it. Therefore, no vote of no confidence will happen.

Sister Thaksin used a flexible tactic: although there is a warrant for the arrest of the main opposition member, there is no command to arrest. The rise of protests Yinglak Chinavat to anything. The government even stated directly that it would not arrest Tagsuban, since he did not want a surge of discontent.

It should be noted that the party "Phya Thai" is popular among the people. In the days when Thaksin Chinavat was Prime Minister, the party implemented several social protection programs. The party acted wisely: interested the poorest and poorest segments of society, as well as small business. What is the wisdom? In the amount of acquired electorate. In addition, these programs really worked. It was from here that the further parliamentary success of the party took place.

The rival party, the Democratic Party, has connections with the royal family and “rules” in the upper house of parliament, which allows it to block projects coming from the lower house (representatives). Analysts agree that the Democratic Party will not risk bringing protests to a political crisis: in the latter case, the conflict can be resolved both by the resignation of the government and the dissolution of parliament. Then new elections will follow. Sutep Tagsuban, just like Thaksin Shinawatra, knows very well: the ruling party after the snap elections will remain the ruling party that will not confirm the legitimacy of the protests. Hence the distribution of flowers: the protesters do not want a crisis of executive and legislative power. They just want to knock down Yinglak Chinavat and convey their point of view to the government and the people. More precisely, the point of view of the Thai middle class, which is the party electorate.

As for the crisis, such a situation may still arise due to unrest: the latter interfere with tourism, and in fact tourism is one of the main sources of income for the Thai budget. Tourists feed the local population. On November 26, for example, the Russian Embassy in Thailand asked Russian citizens to refrain from flying to the kingdom. And Russians love to celebrate New Year, then Christmas in Thailand. And now is the time to buy vouchers. The Foreign Ministry advised the Russians to at least avoid places of unrest in Bangkok. However, Russian airlines do not change their flight schedules to Thailand yet.

Nevertheless, from November 26, Russians have already begun to refuse tours to Thailand. Executive Director of the Association of Tour Operators of Russia Maya Lomidze told RIA “News":" Today, we began to call from travel agencies with reports that tourists refuse to travel to Thailand, despite the fact that the situation is localized and demonstrations take place only in certain places, remote from the sightseeing routes in the city. Tour operators also confirm this information. Instead, they offer tourists other options for travel. "

This is logical: 26 in November The Democratic Party of Thailand called on its supporters for a "popular anti-government uprising." To predict the consequences of such a call is quite difficult. There were voiced demands for the resignation of Yinglak Shinawatra.

November 27 protests have gone beyond Bangkok. The opposition blocked the Trang, Songkhla and Satun city halls in the provinces of the same name.

The coming days will show how events will unfold and whether the government will compromise with the opposition. Yinglak Chinavat should have remembered the lessons of 2010, when, during the suppression of protests in Bangkok, 92 people were killed, and the number of victims nearly reached two thousand. By the way, in 2010, the current main opposition member Sutep Tagsuban served as assistant prime minister. And, apart from charges of incitement to street protests related to the seizure of the building of the Ministry of Finance and other ministries, this person is suspected of inciting murder: it is believed that he, occupying a high position in 2010, ordered the troops to suppress the protests. What is called the instigator squared. Thus, Yinglak Chinavat can delay time until the next month: in early December, Tagsuban must be brought to justice. Protests lacking a leader are likely to end then.

However, Tagsuban is also not a fool: he organized the storming of the ministries just when he, Tagsubana, must be tried. And if he is charged, he will certainly call himself repressed for political reasons ...

Ctrl Enter
Noticed oshЫbku Highlight text and press. Ctrl + Enter
We are
Siamese commandosResults of the week. “Now Humpback! I said: Hunchback! ”
7 comments
Information
Dear reader, to leave comments on the publication, you must to register.