November 28 2013
33
In the 7-8 issue of 2013, the year of the Ukrainian magazine Defense Express, a number of materials about Ukrainian tank construction were published. Our blog offers a squeeze of the most interesting facts given in them.


So, in an interview with the General Director of the State Enterprise “Plant named after Malysheva "Vadim Fedosov reported that the production cycle of manufacture tank "Hold" is 11 months. Plus, the order and delivery of individual components, like armor parts, is another 7 months. According to him, the Oplot tank has a production complication factor of 80 compared to the T-1,8UD of the Pakistani contract. According to the head of ZiM, the company intends to master the full-scale production of guns, tracks, rollers (probably in workshop No. 630) in order to exclude dependence on the import component (including, as you can understand, supplies from other Ukrainian regions). At the next stage, it is planned to enter such a sphere as the production of tank electronics, thermal imaging equipment and the development of software tools focused on their work and interaction. Ideally, the plant intends to return to the situation of the 1930s and early 1960s, when it represented a 95% self-sufficient structure. 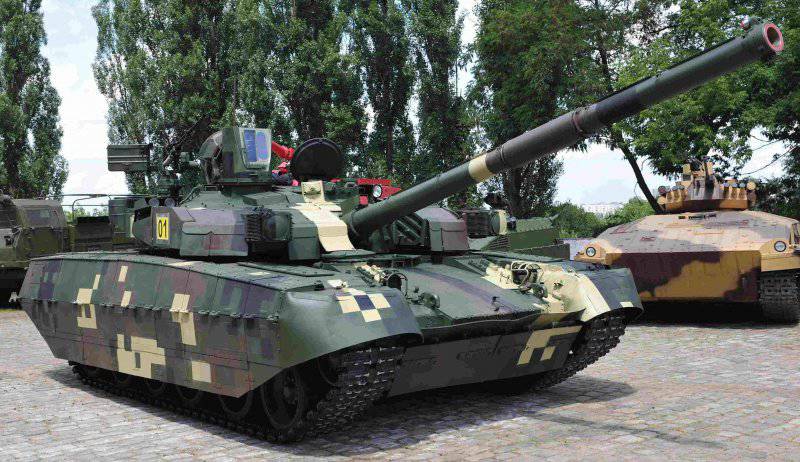 The main tank "Oplot" of the first batch of five units, transferred to the Thai army (c) Ukrspetsexport

It is noted that in its present form, the enterprise is extremely costly, primarily because of the excessive number of personnel with an asymmetrical ratio of categories of workers. If at the end of last year there were 4000 employees at the plant, in 2013 900 was fired, but at the same time 200 people were recruited in critical areas for ZIM. By September, 2013 planned to reach the number of 2700 employees, of whom 1500 is employed in production, 500 of auxiliary workers, and the rest - managers, specialists, non-industrial group, etc.

It is noted that the volume of orders is eight times the current capacity of the plant.

Regarding work with the Ministry of Defense of Ukraine (MOU), Vadim Fedosov reported that nine T-64BV tanks had undergone a full cycle of modernization in the Bulat version and were being prepared for acceptance by the military. It is noted that for the plant MOU is not a very reliable partner, and if the policy of the ministry does not change in the near future, it is difficult for the plant to imagine further cooperation with it.

To reduce the cost of energy, the plant completely excluded gas from the technology, and where it is impossible to use local gasholder units. The gas is also 100% excluded in heating, the plant switched to solid fuel - wooden chip briquettes, which are produced independently of the available resources. Workplaces were equipped with energy-saving double-glazed windows. With the current climate, such windows reduce heating costs in office buildings by 2,5 times, and in production areas - by 1,5-2 times.

The motor production of the plant plans to reach the production volume of 50 engines of two modifications per month (including engines for Oplot tanks), plus 25-30 gearbox sets. At the same time, the main component of all contracts held by ZiM is the engine and gearboxes. Before the new year is expected to launch a new production technology for boxes and engines.

Speaking about the Oplot tank, the general director of ZiM noted that it is the only tank in the world that can overcome water barriers to depths up to 1,9 m without preparation. Spending time to prepare to overcome water barriers to 5 m - 20 minutes. The Oplot tank can be under water until the fuel is fully developed, which is no less than 10 hours, while tanks with a fan cooling system for the engine and MTO can be under water forcibly sealed MTO without overheating the entire 15-20 minutes before the engine overheats . As shells of the first stage in the conveyor of the loading mechanism "Oplot" is 28 shells, this is the maximum number for tanks with mechanized ammunition.

At the same time, Vadim Fedosov considers the T-64 to be the most promising machine for Ukraine, since it is most friendly with the economy compared to other tanks. This tank has a huge modernization potential and the plant’s task is to create a new “face” of the tank as soon as possible, and this work is already underway.

Ctrl Enter
Noticed oshЫbku Highlight text and press. Ctrl + Enter
We are
Interview with the former director of the Plant. Malysheva Vadim FedosovList of destroyed the largest and most high-tech enterprises
33 comments
Information
Dear reader, to leave comments on the publication, you must to register.