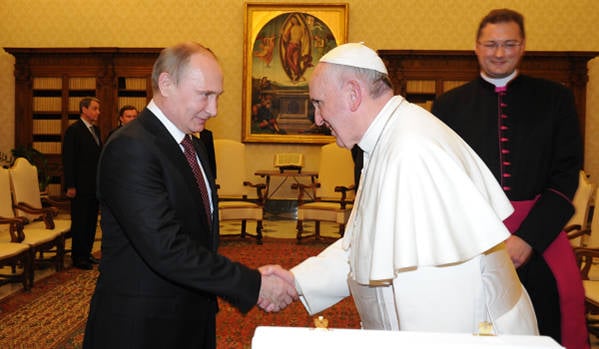 Vladimir Putin met with Pope Francis in the Vatican during his official visit to Italy. How the meeting was perceived in the Catholic world and whether the Pope’s return visit to Russia was worth waiting for the Voice of Russia was told by the press-attaché of the conference of the Episcopate of Poland, priest Jozef Klöch, Professor Anchich Nedelko and the Spanish Vaticanist José Manuel Vidal.


“Both the Pope and the President of the Russian Federation are worried about what is happening in the Middle East, especially in Syria,” said the episcopate of Poland, the priest Jozef Klyok, in an exclusive interview with the Voice of Russia,

“The Pope and the President of Russia discussed two main topics during their conversation. First, the critical situation regarding the murders of many Christians in different parts of the world, often under terrible circumstances, is alarming to both. Particularly strong emphasis was placed on this tragic problem.

Second: both the father and the president are worried about what is happening in the Middle East, especially in Syria, where the bloody civil war continues.

Hundreds of thousands of civilians are now suffering, including many children. Vladimir Putin thanked Pope Francis for the letter he sent to the G-20 leaders in September. In it, the head of the Roman Catholic See called on the world's leading politicians to do everything to end the war in Syria, as well as to continue providing humanitarian assistance to Syrian refugees, without which they simply would not survive. In general, the negotiations in the Vatican demonstrated a complete understanding of both parties.

In a conversation with Vladimir Putin, Pope Francis also expressed the opinion that it is necessary to provide an opportunity for representatives of ethnic and religious minorities to participate in the life of Syria. This could reduce the intensity of passions and contradictions in the country.

But there is only one way out of the bloody war in Syria, as the Pope and the President of Russia believe: to act not by force weapons, but exclusively through peace negotiations. Only in this way can the great tragedy be stopped, both high participants of the meeting in the Vatican are sure.

And the last detail: the audience was held in a cordial atmosphere. Vladimir Putin and Pope Francis confirmed that they have good relations. "

The meeting between Vladimir Putin and the Pope is extremely important, Nedelko Anchich, professor and chief editor of the journal Crkva u svetu, told the Voice of Russia:

"For me, as a Catholic and a person, it is very important that the meeting of the Pope of Rome and the President of Russia was organized. I think this is the result of some progress in relations and, perhaps, in the foreseeable future, we can expect the visit of the Pope to Moscow as a sign of rapprochement of all Christians which, as Pope John Paul II said, are no longer distant and unknown to each other, but brothers.

It is very important that Pope and Putin raised the topic of a Syrian settlement. It seems to me personally that on this issue Russian policy is closer to the Vatican than the Western one, some of whose representatives were planning to intervene in Syria, while Russia was calling for a treaty, conferences, rapprochement of the parties. "

Vladimir Putin’s first meeting with Pope Francis reflects the Vatican’s desire to improve relations with the Russian Orthodox Church. This opinion was expressed by the authoritative Spanish Vaticanist, the chief editor of the Catholic magazine Religión Digital Jose Manuel Vidal:

"Relations between the ROC and the Catholic Church, unfortunately, are far from ideal. Apparently, Pope Francis intends to change this situation. He is clearly interested in overcoming the accumulated contradictions and demonstrates a desire to take a course towards rapprochement. Patriarch Kirill only confirms the emerging trend.

Ctrl Enter
Noticed oshЫbku Highlight text and press. Ctrl + Enter
We are
Stanislav Stremydlovsky. Pope and German Chancellor think about the future of UkraineOn the question of the abdication of Benedict XVI
64 comments
Information
Dear reader, to leave comments on the publication, you must to register.