The Monroe Doctrine is archived, but the US is attacking everywhere. 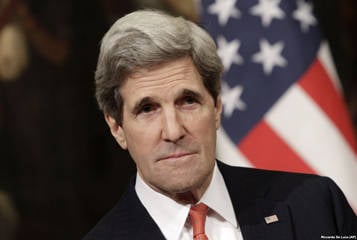 US Secretary of State John Kerry announced the end of the "era of the Monroe Doctrine." On November 18, he delivered a keynote speech about partnership with Latin America at the OAS headquarters in Washington. For almost 200 years, the US foreign policy in the Western Hemisphere was based on the doctrine, which owes its name to the fifth in a row, to US President James Monroe and proclaiming that Latin American countries should not be viewed by European powers as objects of colonization ...


“America for Americans” —this slogan the United States covered the imperial essence of the doctrine that was used during the Cold War years to combat the “expansion of the Soviets”. The Monroe Doctrine covered up the suppression of revolutions in Guatemala and Chile, justified the physical liquidation of popular leaders, military actions against partisans in Cuba, Nicaragua and other countries ...

The key thesis of Kerry's speech is the statement that in the new historical conditions, the United States views the states south of the Rio Grande as "equal partners" who are obliged to "promote and defend democracy", "share responsibility, cooperate on security issues." It is difficult to interpret these formulations clearly. On the one hand, Washington seems to be making it clear that it will not resort to armed intervention to protect its "vital interests." On the other hand, the provisions on “shared responsibility” and “security cooperation” sound vague and ambiguous.

However, against whom these provisions are directed, it follows from the speech itself. Kerry lashed out at Venezuela and Cuba. In Venezuela, he said, "democratic institutions are weakened." In Washington, they are annoyed that the National Assembly voted to give President Nicolas Maduro special powers that he uses to stop the economic war against the country (speculation, hiding consumer goods and food, undermining the purchasing power of the bolivar, the national currency). Venezuelans approve of the measures taken by President Maduro, his authority is growing noticeably. In Cuba, the head of the State Department is not satisfied with the pace of democratic change. The United States would like these transformations to accelerate, and hope that "the Cuban government will adopt a broad program of political reforms that will allow the people to freely determine their own future." In the United States, it is hoped that the democratization process in Cuba will take a landslide character just as it did with the destruction of the USSR.

The United States archived the Monroe Doctrine, but did not relinquish the pressure on Latin American countries to destabilize them. Targeted propaganda attacks are being conducted against unwanted leaders. Slander flows are pounding on Bolivian President Evo Morales, primarily for the “insufficient efforts” of his government in the fight against illicit coca plantations and drug trafficking. And this is when the Bolivian special services are engaged in fierce clashes with drug cartels, which, as a rule, are financed through banks controlled by businessmen from the United States and the Anti-Drug Administration (DEA). In response, Morales attacks. He has repeatedly advocated the tradition of Barack Obama to "judge peoples for crimes against humanity." The loudest of all his accusations were made in a speech at the 68-th UN General Assembly. The president of Bolivia claims that the United States uses the most criminal methods to preserve its dominant position in the world, widely organizing conspiracies and assassinations. Morales has reduced contacts with representatives of the United States to a minimum, preferring to conduct trade and economic affairs with China, Western European countries, Russia and Belarus. "If necessary, we generally close the US Embassy," - threatened the president of Bolivia.

Washington has never stopped hostile activity against Ecuador. After the failure of the CIA to crack down on President Rafael Correa with the help of agents in the Ecuadorian police, the US Embassy spared no effort to “re-educate” Correa. Adam Namm, the American ambassador to Quito, criticized the Ecuadorian president for rapprochement with Iran and Belarus. The answer was heard immediately: “I am not surprised by his [Namma] statements, because the diplomat is new to these issues. Ecuador will not ask permission from anyone to maintain sovereign relations with those countries with which it wants. It is worth looking at how many countries where absolutely no elections are held have privileged relations with the United States. Absolutist monarchies! So stop it! We are not a colony. As long as I am the president of this country, there will be no neo-colonialism! ”Correa’s sharp comments on Obama’s statement about the“ exclusivity of the American nation ”, allegedly preoccupied with protecting the interests of“ all of humanity ”, draw attention to themselves. The Ecuadorian president compared these claims with the Nazi policies of the Third Reich.

In October, Correa visited Russia, discussing, among other issues, MTC issues, deliveries of Russian weapons to Ecuador, in particular air defense systems, as well as an additional batch of Mi-171E transport helicopters. Russia is interested in the implementation of several large oil and gas projects in Ecuador. The issues of cooperation intensification are discussed by Ecuadorians and with China; Chinese specialists are expected to be involved in the construction of an oil refining complex (Refineria del Pacifico), which is scheduled for completion at 2017. 60 is already operating in Ecuador for Chinese companies in the mining industry and in the construction of road and transport infrastructure. All this causes considerable concern to Washington, hence the strengthening of the intelligence work of the American intelligence services in Ecuador. According to the site Contrainjerencia.com, in 2012-2013. CIA personnel in Ecuadorian residency has been doubled. Employees with experience in subversive work in Latin America were sent to Ecuador: W. Mozdierz, M. Häger (Haeger), D. Robb, H.Bronke Fulton, D. Hernandez (H. Hernandez), H Weber, A. Saunders (Saunders), D. Sims (Sims), K. Buzzard (C. Buzzard), M. Kendrick and others.

The problems that Washington has with Brazil and Argentina because of the scandalous revelations with listening to the presidents of these countries, Dilma Rousseff and Cristina Fernandez de Kirchner, have not received a satisfactory resolution. Americans, in fact, did not apologize for total espionage in these countries. Spying is not only not reduced, but has become more sophisticated, forcing national intelligence agencies to develop joint measures to curb the operations of the CIA, NSA, US military intelligence. At the same time, steps are being taken to organize a system of countering electronic espionage within the framework of the Union of South American Nations (UNASUR). In Mexico, the countries of Central America and the Caribbean, American intelligence manages almost without hindrance, except for Cuba and Nicaragua, whose counterintelligence from time to time deliver sensitive blows to the CIA agent network.

At the moment, the most important task for the US security forces is to maintain control over Honduras, which is called the "unsinkable US aircraft carrier" in Central America. US military bases are already located on the territory of Honduras, but the Pentagon plans to build new ones - aviation and marine. Washington's cynical interference in the recently concluded election campaign in Honduras is another signal of the White House to Latin America: we will ensure our interests at any cost, otherwise we are not happy.

United States man in elections in Honduras - Juan Orlando Hernandez, the candidate of the conservative National Party. For more than three years, he headed the National Congress, largely contributed to the consolidation of political forces hostile to former President Manuel Zelaya and his wife Siomare Castro. It was she who was his main rival in the elections, being a candidate of the center-left party Freedom and Revival (Libre). Hernandez supported a military coup in 2009 that led to the overthrow of Zelaya, maintains close ties with the security forces, and contributed to the expansion of the protective functions of the military.

For the US embassy, ​​the exclusion of Siomara Castro is a matter of principle. How it will be resolved is unclear. In a radio interview for Radio Globo, Manuel Zelaya said: “Siomara won the fight for the presidency of the republic. They [Honduras High Electoral Court] are stealing the victory from Siomara Castro. Court estimates do not stand up for any statistical analysis. And we do not recognize this result, we reject it. ”

Lisa Kubiske, the US ambassador to Honduras, actively intervened in the electoral process to ensure the victory of Hernandez. In fact, she is Siomara Castro's main rival. Whether the US embassy is able to secure the coming of Hernandez to power will be shown in the near future. The media has already launched information that in the process of counting votes, he leads by a wide margin.

Ctrl Enter
Noticed oshЫbku Highlight text and press. Ctrl + Enter
We are
Internal colonization: the Russian Empire a hundred years laterMilitary reform as an integral part of the security concept of the Russian Federation: Systematic dynamic assessment
9 comments
Information
Dear reader, to leave comments on the publication, you must to register.