Kennedy's assassination: the result of the CIA and FBI conspiracy 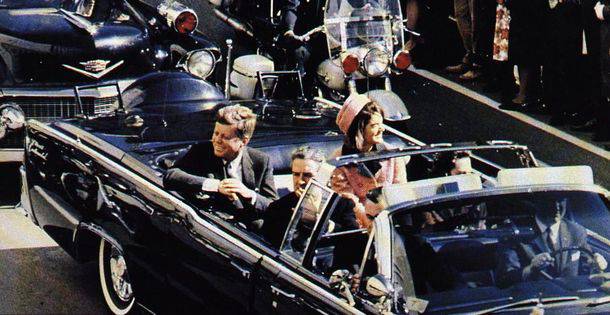 November 22 marks exactly half a century since the death of John F. Kennedy. 35 US President was killed under very strange circumstances. Over time, the tragedy was overwhelmed with a mass of details indicating the involvement of US intelligence and prominent American politicians in it ... 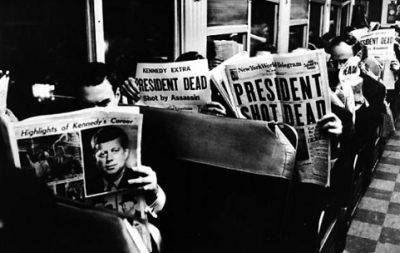 Recall the Kennedy motorcade was shelled in the capital of Texas - Dallas, on Friday, November 22 1963. A few moments later, the president passed away. Hot on the heels of a murderer was declared a certain Lee Harvey Oswald, a loner, known for his leftist views. Later, the government's “Warren Commission” gathered together data that supported this particular version, but ignored dozens of other facts indicating its inconsistency.

In 1979, the Congressional Committee on Terrorism concluded that Kennedy was killed as a result of a "conspiracy of professionals." However, at the same time, congressmen did not dare to openly indicate customers. Meanwhile, according to historians, the plot to assassinate Kennedy is the “mother of all conspiracies.” He wrote about 2000 books, 95% of which are based on the denial of the conclusions of the Warren Commission and directly call the real organizers of the assassination. But why the doubts in the official version?

The Warren Commission dealt not so much with the investigation as it sought evidence of the theory of the "lone wolf." “She relied in all ways on data provided by the CIA and the FBI, which played into the hands of high-ranking officials seeking to conceal evidence,” said member of the Senate Intelligence Committee, Richard Schweiker. The fact that the Commission ignored the testimony of "objectionable" witnesses was written by Joshua Thompson in 1967 and Jim Marrs in 1989. In addition, all amateur photos and videos that captured the moment of the murder were seized by police and federal agents from their owners - residents of Dallas. 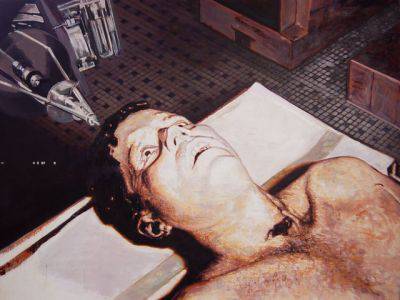 The official version beats a number of inconsistencies. The “results” of the autopsy, for example, conflict with medical images and video recording of the President’s body at the site of the tragedy. Oswald’s photographs are also considered a fake, in which he poses in his yard with a rifle, defined by the Warren Commission, as weapon murder. The rifle itself was tested twice by an FBI sniper Robert Fraser. At the same time, he confirmed that he could not reach Oswald’s rate of fire. Moreover, all his bullets flew past 12-13 centimeters due to irreparable optical sight defects ... Finally, the main evidence of the tragedy - a documentary film recorded at the time of the tuple following - was shamelessly cut and remounted, essentially becoming “ the biggest hoax of the twentieth century. "

All testimony, which pointed to the "conspiracy of professionals," the Warren Commission ignored. If the witnesses continued to persist, they were threatened. Historian Jim Marrs by name calls Americans intimidated by FBI agents. Say, an employee of the school library (from where Oswald shot or another killer) Joe Molina “was intimidated by the authorities and lost his job soon after the murder”, and witness Ed Hoffman was warned that he “would be killed” if he did not give up “wrong” testimony. There are quite a few such examples. Moreover, there is a list of 103 witnesses who died a very "strange death." Among them are journalists, actresses, politicians, businessmen, policemen, and finally, just random people who have shown their awareness of the Kennedy assassination, or ostracized the official version. Moreover, they died so that you can easily assume the handwriting of special services, hiding the ends: car accidents, overdoses, domestic accidents, such as the explosion of a home heater ...

During his short life, Lee Harvey Oswald managed to find out by what means he could travel around the world, even visit the USSR and return to the West with the “legend” of a fighter against capitalism. James Botelho, a colleague of Oswald, argued that he was the only American Marines who had ever crossed over to a communist country, and then accepted back without problems. “Even when the command of the Marine Corps and the American intelligence decided not to investigate the reasons for his“ flight ”, I understood: Oswald went to Russia for a special mission!” Admitted Botelho. 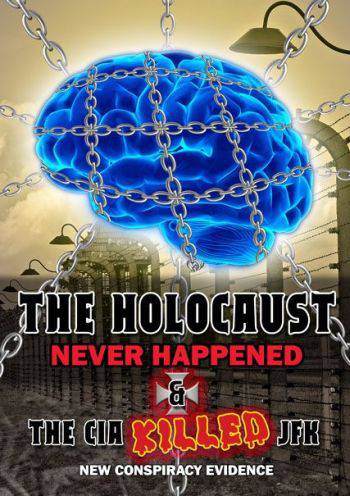 A number of sources point to Oswald’s connection with US intelligence agencies. Interestingly, the last time Oswald visited the office of the FBI two weeks before the Kennedy assassination. Historian James Douglas described Oswald as "a special CIA agent who became the perfect scapegoat." "He was at the scene of the murder, but he was not a shooter," echoed Joseph Thompson. But even if we agree that Oswald still shot at Kennedy, it is obvious that the attackers obviously did not count on these shots, giving him only the role of a cover. Another congressmen from the Committee on Terrorism determined that four shots were fired in all, and the snipers were shooting from at least two very distant points. Thus, the official version of the Warren Commission on the single was actually refuted at the end of the 70-s ...

So there is no doubt that John F. Kennedy was killed by a group of professionals who used Lee Harvey Oswald and his supposedly “communist” past as a cover. Now let's try to unwind the tangle that stretches into the “best houses” of Washington. Who would benefit from killing 35 US President?

In 1995, ex-military intelligence officer John Newman published evidence that the CIA and the FBI cleaned up their files, removing “extra” data from them indicating long-term contact with Oswald. According to Newman, the key figure in the organization of the murder was the head of the CIA counterintelligence, James Angleton, since only he "had access, power, and a devilishly ingenious mind." And the main ideologue of the attack was the ex-CIA director Allen Dulles, who was sent by John Kennedy to resign after the unsuccessful invasion of Cuba.

The fact is that the resignation of Dulles led to the actual refusal of Kennedy from the attempts to overthrow Fidel Castro by force. So, the hopes of the American mafia and Cuban émigrés for a triumphal return were shattered. Meanwhile, before the Cuban revolution 1959, they controlled the gambling business and drug trafficking on the island. “The Mafia, the CIA and the Cuban opposition united to assassinate President Kennedy,” writes researcher Anthony Summers. - There is no contradiction in this. By that time, these three groups had been in the same bed for several years - they were tightly tied to the fight against Fidel. ” The same version is followed by journalist Ruben Castaneda, as well as ex-governor of the state of Minnesota, Jesse Ventura.

Do not forget about the role of the FBI. The fact is that the head of the bureau, Edgar Hoover, was fully aware of the upcoming elimination of Kennedy. The founder of the American “political police”, who spent his whole life fighting the “red plague”, was frightened by the too obvious rapprochement of the president with the Soviet Union. But the main circumstance that predetermined his participation in the conspiracy is not even John F. Kennedy, but his brother Robert. Appointed US Attorney General, he declared a "crusade against the mafia." However, the FBI at the time of Hoover was connected with American organized crime by truly inextricable ties: the mafia did all the dirty work for the FBI and the director of the Bureau simply could not refuse such a valuable resource.

The second version: The Pentagon and the MIC Conspiracy

According to the historian James Douglas, Kennedy was killed because he was looking for friendship with the USSR and intended to end the war in Vietnam. This scarecrow was not only Hoover, where a similar dislike for the US foreign policy was caused in the Pentagon and inside the American military-industrial lobby. That is why the 35 President became a tasty target for those who were interested in continuous military conflicts, primarily in the US Department of Defense and among defense contractors. It is worth noting that the killers achieved the desired effect - Kennedy's vice-president Lyndon Johnson expanded the American military presence in Vietnam and increased the cost of the war, which as a result lasted twelve more years ...

As is known, the Federal Reserve System is practically not under the control of the White House and is, in fact, a “state within a state” with a monopoly on the production of the dollar. John Kennedy planned to curb the power of the Fed, transferring to the treasury of the United States the right to issue national bank notes. Many researchers, including Richard Belzer, place the responsibility for organizing the Kennedy assassination on "American billionaires, leading brokers and bankers who acted in tandem with the CIA, as well as with their agents in the government." 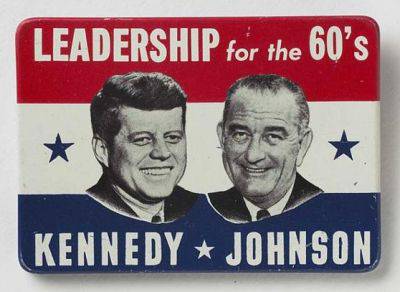 The fact that Lyndon Johnson hated his patron is a known fact. He got into the 35 Presidential team thanks to the help of the FBI Director Edgar Hoover, who shared with him compromising information on members of the Kennedy clan. However, on the eve of the latter’s struggle for a second presidential term, Johnson’s hatred was also added to the fear that he would be left out of the renewed presidential team.

That's why Johnson "played a leading role in the conspiracy that united the magnates of Dallas, the local branches of the CIA and the FBI," says American lawyer Vincent Buglios. In addition, many witnesses noted that as the “Day of the X” approached, Johnson behaved much bolder and more aggressive. “Kennedy will never embarrass me again: this is not a threat — this is a promise,” he said.

In general, it is probably worth listening to historian Joseph Farrell, who blaming Johnson, nonetheless, argued that the entire American elite had its own motives for eliminating Kennedy: the military, the CIA, NASA, the FBI, and others. That is, Lyndon Johnson became the "necessary" link, bringing together disparate groups and fulfilling the "fusion of their interests." 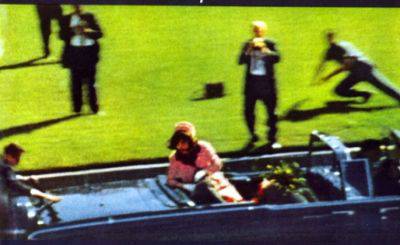 So, it turns out that the theorists of the multipass combination to eliminate Kennedy could be four or five groups representing the American ruling establishment. Kennedy’s murder is perhaps a kind of antipode of the famous detective story described in Agatha Christie’s famous Murder on the Orient Express. November 22 1963, in a bright independent leader who stopped racial segregation in the USA and made a step towards the Soviet Union, was not shot by a “lone wolf”. He was shot at the darkest side of American politics: all its filth, unprincipledness and cruelty.

Interestingly, public opinion polls conducted already today, time after time, show the deep dissatisfaction of the overwhelming majority of Americans with the results of any official investigations:

75% do not believe that Lee Harvey Oswald "worked Kennedy" alone;
70% believe that killing is the work of a group of professionals;
74% are confident that the government is hiding the truth about the attempt;
76% have no doubt that the president was killed in a conspiracy.

Public interest in the materials of the case is huge, but even after half a century, Washington is in no hurry to unpack the archives. Not long ago, a CIA spokesman said that he had about 1100 order documents related to the assassination of John F. Kennedy, who were not exempt from the secrecy "for reasons of national security." It is expected that they will be fully available no earlier than ... 2029 of the year.

Ctrl Enter
Noticed oshЫbku Highlight text and press. Ctrl + Enter
We are
The tangled story of American intelligenceSeven most interesting versions of the assassination of John F. Kennedy
25 comments
Information
Dear reader, to leave comments on the publication, you must to register.