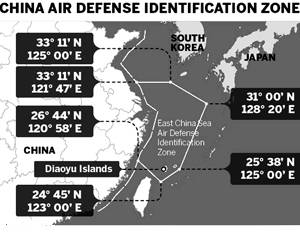 On the eve, US Secretary of State John Kerry called on China to exercise caution and restraint, arguing that air traffic freedom is essential for security in the Pacific region. “We urge China not to realize its threats regarding airplanes that do not identify themselves and do not obey Beijing’s orders,” Reuters quotes the Secretary of State.

The statement of the US Secretary of Defense was by no means so mild. Some time after the Chinese statement, Chuck Hagel noted that it was "a destabilizing attempt to violate the regional status quo." “These unilateral actions increase the chance of mutual misunderstanding and miscalculations,” he warned the Chinese side.

According to Time, Hagel made it clear that if necessary, the United States could become an ally of Japan in the war to maintain control over the disputed islands. Back in early October, Hagel stated that "if these islands fall under the administrative control of Japan, they fall under our agreement with Japan." At the same time, the general tone of the message indicates that the problem may, in its severity, exceed the “Iranian threat” that was relevant until recently and lead to a large-scale war.

Paris is also worried about the situation, French Foreign Ministry spokesman Romain Nadal said Tuesday. “France is closely following the situation in the East China Sea. We are concerned about tensions in the region and urge the parties to maintain restraint, ”said Nadal.

“The Japanese and the United States should defiantly ignore the statement of the Chinese, since they cannot accept it,” said Vasily Kashin, an expert at the Center for Analysis of Strategies and Technologies in an interview with the VIEW newspaper, in an interview with the VIEW newspaper. Nevertheless, in his forecast, one should expect an increase in the activity of Japanese and, perhaps, American military aviation.

“Airplanes will begin to fly nearby, there will be cases of dangerous maneuvering. This will partly resemble the situation over the South China Sea in 2001, when the Chinese fighter and the American reconnaissance aircraft collided, as a result the Chinese fighter fell, the pilot died, and the American aircraft was forced to land at the Chinese air base, where the pilots were taken prisoner, long time held and released only after bilateral negotiations. This caused a very sharp diplomatic crisis, which was erased only after the events of September 11. But in general, the above scenario is possible as the most negative development of events over the Diaoyu Islands, ”the expert believes.

According to him, since March, China has begun to increase the presence of aviation and warships in the "disputed zone." Previously, the case was limited to ships of the marine monitoring service and unarmed patrol aircraft.

“The forces will increase, they will ply there, demonstratively fly out to intercept and accompany each other, this will create tension and nervousness. Someone may face someone, and there will be human casualties, this happens periodically. This happened between Soviet and NATO aircraft, when they patrolled the sea areas. The situation is fraught with a major diplomatic crisis, ”explained Kashin.

However, the military scenario, which the US Secretary of Defense hinted at, is still considered by the expert to be extremely unlikely. “I do not think that they will be ready to enter into conflict. This is clearly not in the interests of the Chinese, and they have little chance of winning. There is another point: with such threats, all civilian airlines will be forced to change their behavior. As I understand it, those who fly through this area have already agreed with the new rules. The Chinese will be limited to warnings, demonstrations and active flights, ”said Kashin.

Heavenly dispute with the Middle Kingdom

Already after Kashin commented to the VIEW newspaper, his forecast began to come true. ITAR-TASS reports that US bombers B-52 without warning entered the Beijing-created air defense identification zone. This was reported to the Wall Street Journal by US officials. According to them, the incident occurred on Monday at about 19.00 on the time of the US Eastern Coast (04.00 Moscow time). The aircraft flew from Guam and flew over the Diaoyu Islands (Senkaku).

Recall that over the weekend, the Ministry of Defense of China announced the creation of an identification zone of air defense in the East China Sea and the inclusion of airspace over the Senkaku Islands (Diaoyu), which Japan considers its own. At the same time, Beijing warned that the so-called emergency defensive measures would be applied to any object that did not pass identification when entering the controlled area.

In response, on Monday, Japanese Prime Minister Shinzo Abe announced the Japanese intention “to defend their territorial waters and airspace with all determination”, and a note was sent to the Chinese Embassy, ​​in which Beijing’s actions were called “absolutely unacceptable”. The Chinese chargé d'affaires in Tokyo, Khan Zhiqiang, dismissed a protest note, saying that "Japan has no right to make irresponsible statements."

Meanwhile, the South Korean government also announced that it does not intend to recognize the zone unilaterally imposed by Beijing. The discontent of the Koreans was caused by the fact that the Chinese zone “overlaps” with a similar region already introduced by Korea in the airspace. The controversial area is a rectangle of size 15 on 120 km.

Recall that the underwater rock of Iodo is closer to Korea than to China - 149 km from the Korean island of Marado, while to the Chinese coast 247 km. The disputed rock is located at a depth of 4-5 m, in any case, such an assessment last year was given by President of the Republic of Korea Lee Myung-bak. In 2003, a South Korean automatic seismic weather station was installed on Iodo steel structures. The rock has repeatedly been included in the bulletins News - Last year, in response to the claims of Beijing, Seoul ordered to strengthen air patrol of the water area.

According to the head of the Center for Korean Studies at the Institute of Far Eastern Studies of the Russian Academy of Sciences Alexander Zhebina, the claims of both parties to this rock (which is practically invisible above sea level) from the point of view of international law do not yet seem to be justified. International maritime law does not give states the right to declare underwater cliffs their territory.

“It’s also premature to talk about mining in the area, some resources from the ocean floor, in my opinion,” Zhebin explained to the newspaper VIEW. “We are talking more about prestigious and political considerations, which, unfortunately, have acquired a higher profile in the context of more substantial territorial disputes.” These disputes, the expert reminds, are conducted even among the American allies themselves: Japan and South Korea, which, as we know, cannot divide the Dokdo Islands (which in Japan are called Takeshima).

The actions of both China and South Korea should be viewed in a wider context - in the context of what is now happening in Northeast Asia, Zhebin said. “There is a return of the United States (including the military) to the region, it is aimed primarily at deterring China, and preventing its military and political influence in the region.” China has become the largest economic partner of both South Korea and the DPRK. This situation cannot but disturb the United States, which maintains a strong military-political position in the region.

“The fact that China has expanded its air defense zone is connected precisely with these processes: the Americans create a sanitary cordon around the PRC from dependent and allied states, one of which is South Korea,” Jebin stresses.

The expert recalls that, by decision of Seoul, a base is being built on Jeju Island, which, from the point of view of left-liberal circles in South Korea itself, is directed against China. “It is not surprising that Beijing is taking reciprocal steps - and this is clearly not conducive to normalizing the situation in Northeast Asia,” Zhebin complains.

Ctrl Enter
Noticed oshЫbku Highlight text and press. Ctrl + Enter
We are
North Korea promises a “sea of ​​fire" in response to "provocations"News bulletin: the situation around the Senkaku Islands may escalate
108 comments
Information
Dear reader, to leave comments on the publication, you must to register.