On the eve of "Geneva-2" terrorists massacred in the hospital 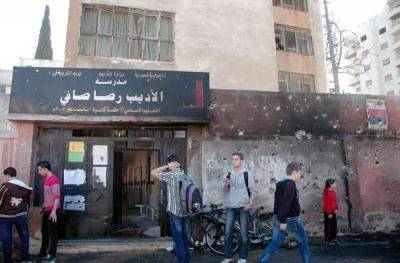 After the next round of political consultations in Geneva with the participation of the Deputy Foreign Ministers of the Russian Federation Gennady Gatilov and Mikhail Bogdanov, as well as the UN special envoy Lakhdar Brahimi, the date of the peace conference on Syria - January 22 of 2014 was named. The conference, which was mentioned back in May, was constantly postponed, but many politicians tried to be optimistic: they predicted that it would take place before the end of 2013. What was the reason for its constant postponing?


First of all - this is the two-faced position of the United States. On the one hand, official Washington is considered one of the co-authors of the idea of ​​holding an international conference. On the other - the same Washington sabotages her.

It would seem that the obligations of the Russian Federation and the United States are divided according to justice: Russia assumed the mission to convince the leadership of Syria to take part in the “Geneva-2”. The United States, for its part, should do the same in relation to the Syrian "opposition." Russia with its part of the obligations honestly handled in May. But there was not a single demand from the side of Washington for the “opposition”. Not a single word of condemnation of terrorists, no matter how cruel their crimes.

Of course, it can be said that the United States itself has no influence on the “opposition.” On the one hand, no one can control thousands of scattered armed groups, for many of which the United States and the West are just as “infidel” as Russia. The members of these bandit formations only dream about building an Islamist state.

And it would have been enough for the United States to clearly state that the “opposition” in the event of refusal to participate in the “Geneva-2” would lose any support - Washington could not be reproached at least in sabotaging the commitments undertaken! But nothing happened.

On the contrary, in addition to the supply of weapons, terrorists also received political cover, culminating in provocation using chemical weapons by militants in Eastern Ghouta, followed by false accusations of this against the Syrian army and open threats of direct aggression. Not to mention the hundreds of statements by American representatives, in which there was never a single word of condemnation of the terrorist actions of the “oppositionists”, but every time thunder and lightning rushed at the government of the UAR.

Thus, the terrorists, who call themselves “the opposition,” were given and given indulgence to commit the most heinous crimes that can only be imagined, comparable in their barbarism to the atrocities of the fascists.

... Forced out by the Syrian army from the city of Kara, the militants occupied the small town of Deir-Atya, located between Damascus and Homs. Peaceful life among mountains and green gardens is over. Bandits brutally murdered the head of administration. The bodies of the dead soldiers were tied to cars and dragged through the streets. They hung black Al-Qaida flags over mosques and the church.

But especially the whole barbaric essence of the “opposition” was reflected in their crime against the medical staff of Al-Basel Hospital. This hospital was seen by anyone who drove along the Damascus-Homs highway. And who could know that this modern, beautiful building can become the scene of a monstrous massacre ?!
A few days ago, on November 20, the bandits tried to seize the hospital. They began by blowing two mined cars at the entrance to it. Killed several security officers. Then a group of "oppositionists" broke into the medical institution and began to destroy the equipment, but the soldiers came in time drove out the uninvited "guests".

Unfortunately, the militants later managed to break into the hospital. And on November 26 they committed a chilling mass murder. Their victims were five doctors, five junior staff and two drivers of ambulance cars.

People in white coats, representatives of one of the most peaceful occupations, were killed by terrorists by cutting their throats ...

These are the cold-blooded crimes that the US, the West, and their satellites in the Middle East are pushing the militants to!

On the same day, gangsters blew up a mined car at a bus station in the Somaria metropolitan area, killing 11 people and injuring around 30. Damaged buses, cars, nearby buildings.

In addition, mortar shelling of residential buildings in Damascus and other cities does not abate. On Baghdad Street, the explosion of a shell fired by terrorists led to the death of three people. In the Masaken quarter, Barzee injured 17 citizens with fragments of mortar shells. In the quarter of Sheikh-Muhiddin for the same reason a girl was killed, a woman was injured. And for the second time the city hall building in Aleppo was shelled. Miraculously, there were no casualties, but material damage was done.

Such crimes will never be just statistics. For each of them will have to answer. This should be remembered by those who are constantly postponing the holding of the Geneva-2 peace conference, who are arming and sponsoring cruel militants, who are playing with terrorism for their political goals, while not carefully noticing that they have long been in the throat of human blood ...

Ctrl Enter
Noticed a mistake Highlight text and press. Ctrl + Enter
We are
9 May in the center of Chisinau will host an exhibition of military equipment of NATOGeopolitical mosaic: the London Magnitsky List has been announced as a newspaper duck, and the thickness of the Americans correlates with their stupidity
29 comments
Information
Dear reader, to leave comments on the publication, you must to register.