November 27 2013
6
Three European scientific satellites of the SWARM project were successfully launched from the Russian Plesetsk cosmodrome on November 22, 2013 with the Rokot conversion launch vehicle equipped with the Breeze-KM booster block. Main challenge flotilla of 3 satellites will be the measurement of the parameters of the magnetic field of our planet. Purpose: to better understand how this field is born in the bowels of the Earth. The project of the European Space Agency (ESA) SWARM (translated from English as “swarm”) includes 3 identical space satellites, each of which carries on its board a payload in the form of 7 instruments (business and scientific).

It should be noted that the “Rokot” launch vehicle belongs to the light class and was built on the basis of the PC-18 intercontinental ballistic missile. Currently, this ICBM is in the process of decommissioning the Russian army. The SWARM satellites themselves belong to the Living Planet project, which is aimed at exploring the Earth. These satellites in orbit will join the SMOC, GOCE spacecraft and other satellites that are already working here, studying the oceans, sea ice and Earth’s gravity. The Swarm space probes themselves are designed to conduct research on the magnetic field of the planet. 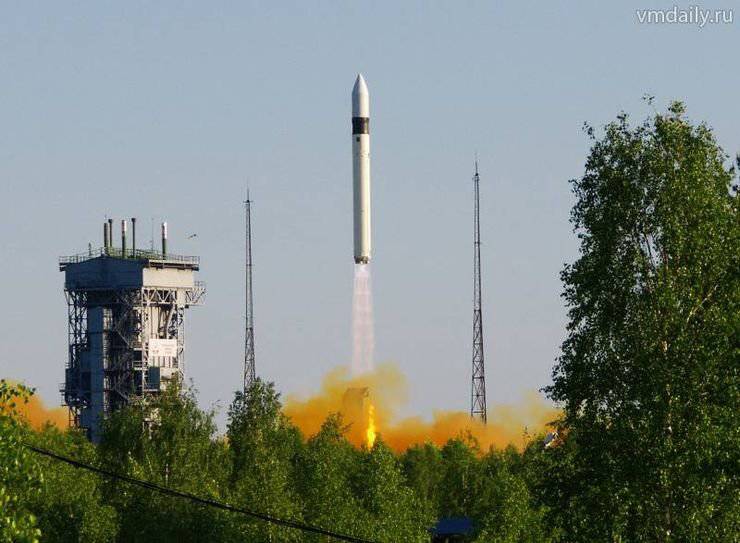 Rokot launch vehicle launch
During Saturday and Sunday, experts of the European Space Agency carried out numerous tests of the on-board equipment installed on satellites and made sure that it was functioning as planned. After that, the satellites safely deployed special metal rods on which the magnetometer sensors are installed. The data that was obtained by ESA specialists showed that the resulting signal-to-noise ratio is even better than previously thought. Currently, the space mission has entered the stage of preparing vehicles for normal operation, this phase will last 3 of the month.

The global task facing this group of spacecraft is the study of changes in the parameters of the magnetic field of the planet, as well as its plasma environment and the ratio of these indicators with changes in the terrestrial landscape. The goal of the project is to find out exactly how the “machine” of generation of the magnetic field of our planet is arranged. Today, scientists suggest that it appears due to convective flows of matter in the liquid outer core of the Earth. In addition, the composition of the crust and mantle of the planet, the ionosphere, the magnetosphere, and ocean currents can influence it.

Interest in the study of the magnetic field of the Earth can not be called idle. Apart from the fact that the magnetic field of our planet orients the compass needle, it also protects all of us from the flow of charged particles that rush towards us from the Sun - the so-called solar wind. In the event that the geomagnetic field of the Earth is disturbed, geomagnetic storms occur on the planet, which often endanger spacecraft and many technological systems on the planet. The creators of this mission are hoping to establish what is currently happening with the Earth’s magnetic field, the magnitude of which has decreased by 1840-10% since 15, and also to establish whether we should expect a pole shift, for example. 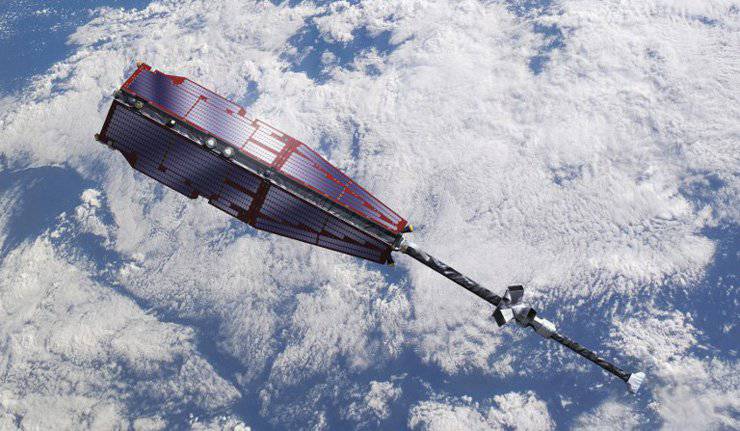 Experts call the main scientific equipment on board the SWARM devices a magnetometer, designed to measure the direction and amplitude of the magnetic field (its vector, hence the name of the device - Vector Field Magnetometer). To help him take readings should 2-th magnetometer, designed to measure the magnitude of the magnetic field (but not its direction) - Absolute Scalar Magnetometer. Both magnetometers are placed on a special long enough extension bar, which along its length makes up most of the satellite (approximately 4 meters from 9).

Also on the satellites there is a device designed to measure electric fields (called Electric Field Instrument). He will deal with the registration of near-Earth plasma parameters: drift, the velocity of charged particles near the planet, density. In addition, the spacecraft is equipped with accelerometers designed to measure accelerations that are not related to the attraction of our planet. Obtaining these data is important for estimating the density of the atmosphere at the height of the satellites (about 300-500 km) and to get an idea of ​​the movements prevailing there. Also, the devices will be equipped with a GPS receiver and a laser reflector, which should ensure the highest accuracy in determining the coordinates of the satellites. Measurement accuracy is one of the key concepts in conducting all modern scientific experiments, when it is no longer about discovering something that is actually new, but literally trying to figure out the known physical mechanisms of the people around them.

It is worth noting that the Earth’s magnetosphere is not only quite complex, but also variable in space and time. Therefore, rather quickly after the beginning of the space age stories Humanity scientists have begun to conduct multi-satellite experiments aimed at studying near-Earth space. If we have a number of identical instruments at different points, then according to their testimony, one can quite accurately understand what is happening in the magnetosphere of our planet, what affects it “from below” and how the magnetosphere reacts to disturbances that occur on the Sun. 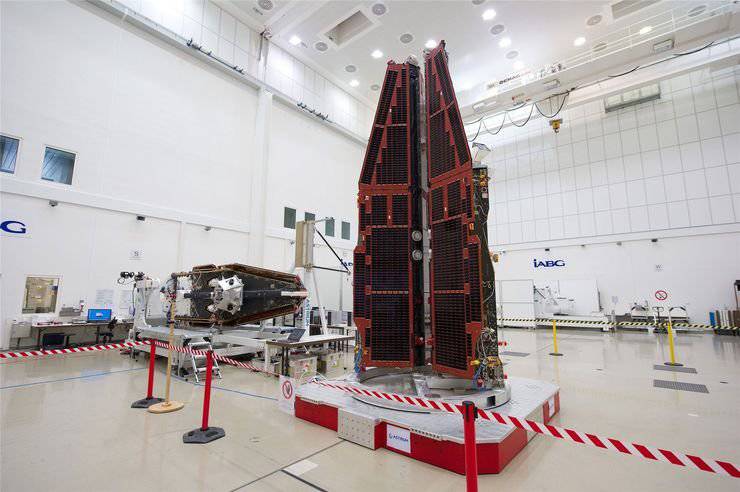 We can say with pride that the “pioneer” of these studies was the international project INTERBALL, which Russia was preparing at the beginning of 1990's, the project worked until the beginning of 2000's. Then in 2000, the Europeans launched the 4 satellites of the Cluster system, which are still working in space. The continuation of magnetospheric research in our country is also associated with the implementation of multi-satellite projects. The first of these should be the project "Resonance", which immediately includes the 4 spacecraft. They are planned to be launched into space in pairs and used to study the Earth’s internal magnetosphere.

It is worth noting that all these projects are quite different. The launched “swarm” will operate in low-Earth orbit. First of all, the SWARM project aims to study exactly how the generation of the Earth’s magnetic field takes place. Cluster spacecraft are currently in an elliptical polar orbit, the height of which varies from 19 to 119 thousand km. At the same time, the working orbit of the Russian satellites Resonance (from 500 to 27 thousand km.) Was selected in such a way as to be located in a specific area that rotates with our planet. In addition, each of these projects will bring to humanity a piece of new knowledge that will help us better understand what is happening with the Earth.

Most of us have a very distant idea about the magnetic field of the Earth, remembering something that we were taught in the school curriculum. However, the role played by the magnetic field is much wider than the usual deflection of the compass needle. The magnetic field protects our planet from cosmic rays, it preserves the integrity of the earth's atmosphere, keeping the solar winds at a distance and allowing our planet not to repeat the fate of Mars. 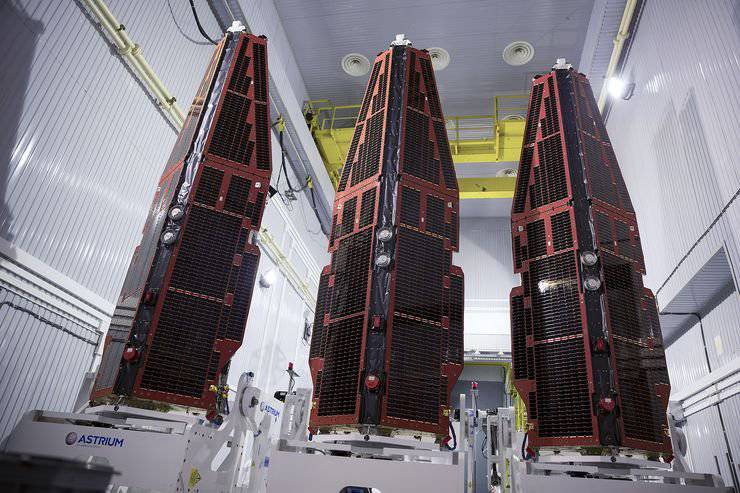 The magnetic field of our planet is a much more complicated formation than it is shown in school textbooks, in which it is schematically depicted as the Earth with a rod magnet stuck into it. In fact, the earth's magnetic field is quite dynamic, and the main role in its formation is played by the rotation of the molten core of the Earth, which acts as a huge dynamo. In this case, the dynamics of changes in the magnetic field is not only of academic interest today. Violations of the geomagnetic environment are fraught for ordinary people with disruptions in the operation of navigation and communication systems, failure of power systems and computing systems, and changes in animal migration processes. In addition, the study of the magnetic field will allow scientists to better understand the internal structure of the planet and natural secrets, which we know not so much today.

The SWARM satellite group was created precisely for this purpose. Their design and assembly process was carried out by the fairly well-known European aerospace company Astrium. When creating satellite data, engineers were able to embody all of more than 30 years of experience in magnetic field research in open space, which Astrium managed to accumulate during the implementation of numerous space programs, for example, Champ and Cryosat projects.

The SWARM satellite 3 is completely made of non-magnetic materials, so they do not have their own magnetic field, which could introduce distortions in the course of the measurements. The satellites will be launched into two polar orbits. Two of them will fly side by side with each other at an altitude of 450 km, and the third will be in orbit 520 km. Together, they will be able to make the most accurate and thorough measurements of the Earth’s magnetic field during research, which will allow scientists to make an accurate map of the geomagnetic field and reveal its dynamics.

Ctrl Enter
Noticed oshЫbku Highlight text and press. Ctrl + Enter
We are
Space Scouts. American spy satellitesSpace systems of the US military communications: analysis of the state and development
6 comments
Information
Dear reader, to leave comments on the publication, you must to register.