Europe is not the ultimate dream, but a cemetery of nations 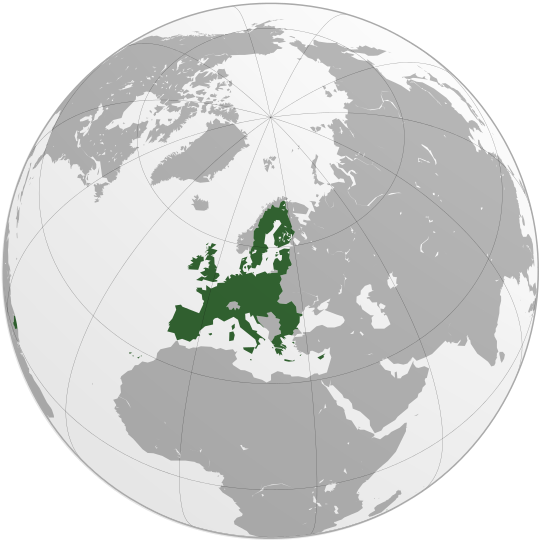 The centuries-old illness of the Russian intelligentsia is Europophilia (Westernism). In the 20th century, it struck the masses, who dreamed of living “beautifully,” as in Western Europe. They did not see, and did not want to see, that Europe is sick and dying. The extinction of the indigenous white population, the abandonment of national cultures, the dominance of American ersatz culture and the mass migration of Arabs, Africans and Asians have almost put an end to Europe, which we saw in the 1960-1980 films.


The sad future of Europe is once again shown by very interesting statements by the President of the European Council, Herman Van Rompuy. Speaking in Berlin on the occasion of the 24 anniversary of the fall of the Berlin Wall, this pan-European politician called for a rethinking of the geographic and demographic parameters of the European Union and forgetting about the possibility of restoring national identity. In his opinion, the concepts of "people" and "homeland" should be in a landfill. stories. I remember that revolutionaries in France at the end of the 18th century acted equally radically, and together with the monarchy they wanted to abolish traditional religion, create a cult of worshiping the “Supreme Being”, etc. In Russia, after the 1917 revolution, the revolutionaries Trotskyists made plans to bring up the “new human ”, free from“ old ”values, including the traditional family.

“We are facing a challenge, and this is our open geography, which does not allow Europe to become home or home,” says the President of the European Council. - Every time when Europe grows, we say to new citizens: welcome to the club! Obviously, continuous expansion mixes political and geographical identities. ”

Thus, the first person of the European bureaucracy offers to forget about the “old-fashioned” homeland and the distinctive national structure.

At the same time, Herman van Rompuy accused politicians of populism who are trying to preserve national identity. “All this is populism - a source of anger and indignation, hope of restoring identity, the illusion that by closing the door, you can turn back time, a lie that in a period of globalization you can survive without much effort,” said a high-ranking EU official. - Those who think that their country can survive by itself live in illusions. Populism and nationalism cannot be answers to the challenges of our time. ”

According to Rompuy, a sign of a new Europe should be the absence of nations in the traditional sense. The European Union is home to all Europeans, everyone and everywhere should feel at home, regardless of the historical characteristics of this area. The politician also urged not to limit the flow of migrants from other continents. He reminded the Europeans that, in the old days, the inhabitants of European countries sent themselves and settled in other regions. Now the situation has changed. Europeans for the most part no longer leave Europe, as it was before. Europe has become a center that attracts millions of migrants from Africa and Asia. At the end of the speech, the politician expressed the hope that in the foreseeable future, Europe will face dramatic changes.

Herman Van Rompuy is clearly cunning, offering to send the concept of "people" and the homeland to the dustbin of history, he does not talk about the price that Europeans have to pay. With the general declaration of “pan-European equality and fraternity”, the indigenous population is aging and dying out, replacing it with newcomers from other continents who do not become English, French or German, retaining their cultural, religious, national and everyday characteristics. There is a creeping Islamization of the Old World. As a result, by the middle of the XXI century a significant part of Europe may lose its usual national-cultural appearance.

From the statement of a high-ranking European official, several conclusions can be drawn at once. Firstly, Herman Van Rompuy is a high-ranking representative of the pan-European bureaucratic superstructure. He broadcasts the ideas that were originally incorporated into the European system. It is not the first year that the West has been in crisis, but the gigantic bureaucratic apparatus of the European Union is so programmed into an initially artificial ideology that, in principle, it cannot produce new ideas. Neither the millions of the unemployed, nor the problems in the economy, nor the huge wave of refugees from the countries where the Arab Spring won, nor the expansion of the Islamist network structures can change the situation. Mr. Van Rompuy and others like him can only transmit such signals. Like, everything is fine: as it was, so be it, do not worry, citizens, the situation is under control!

Secondly, the statement of the President of the European Council indicates the presence of a powerful tendency among the Western elite aimed at eliminating the racial, national, cultural and religious identity of a person and forming a consumer out of him, a “bio-robot” living on the basis of basic programs. There is a work on the erosion of nations, the destruction of the Christian basis of Europe, under the blow of the culture of national states. Eurobureaucracy conducts its course through the introduction of new "norms". So, in 2010, the Council of Europe proposed to send the words “dad” and “mom” to the dustbin of language, since these are the concepts of “sexist language”. They were suggested to be replaced by the impersonal word “parent”. And in November 2013, Germany became the first country in Europe where people of the third, indefinite sex will be officially recognized. They introduced an amendment to the law on civil status, which concerns newborns who were born simultaneously with both male and female attributes. Previously, it was necessary to indicate in the birth certificate whether it was a boy or a girl. Then the child underwent a corresponding operation. Now such children will be officially recognized by people of the third, indefinite sex.

Thirdly, in Western Europe two tendencies are struggling. The first is Herman Van Rompuy - this is a globalist, Euro-integration elite. It leads the attack on the sovereignty of states, the identity of peoples and the individual. The dream of internationalists is a united Europe, and in the long run a world with blurred boundaries where races and ethnic groups mix, while religions and national cultures are destroyed and replaced by world ersatz culture (American). This is Europe and the world where there is a small ruling class that controls culture, education, the media (people's minds, information flows), finance and economics, and the rest of the people are reduced to the level of “two-legged tools”. The European bureaucrats represent a part of the globalist elite and in a variety of ways, from financial pressure to control over children, when parents are actually and legally deprived of the educational function, and the support of various kinds of perverts, erase national boundaries.

The second trend is national. In recent years, we have seen the rise of right-wing nationalist parties and movements. This is Europe that wants to preserve its identity. Europe, which wants to remain itself. In fact - this is a national resistance. Elderly and young Europeans do not want to "dump the history." Apparently, this trend will only increase. True, there is another question: whether European nationalism will not sink to the level of a parochial, unaware of the general laws, saving only its “swamp” or to the level of Nazism, with racism and xenophobia. The emergence of a large nationalism of European identity is a threat to globalists. And the flash of small nationalisms will become another nail driven into the coffin of traditional Western Europe.

Russia such a conflict is beneficial. Moscow can play on contradictions within the European and Western elites. The stronger the global crisis, the stronger the “spiders in the bank” (the world elites) grapple with each other. Under these conditions, Russia can save itself and make a breakthrough into the future.

Russian, Ukrainian, Moldavian, Georgian and other supporters of European integration, campaigning for rapprochement with Europe, do not know or are deliberately silent about the global risks associated with this vector. In fact, Europe is becoming a cemetery of nations. The current confrontation in Ukraine is connected with this choice. Europhiles are dragging Ukraine (Little Russia - part of a unified Russian civilization) into the European Union. Becoming a European is a dream for many young Ukrainians. Many of them already represent the generation of “new barbarians”, deprived of a holistic world view and world view. They do not know or simply cannot comprehend the fact that the economy of Poland, Bulgaria and other members of the former socialist bloc was severely damaged due to EU membership, that Poles, Bulgarians and Romanians are massively going to the developed countries of Western Europe to earn money. With about a third of the population of the Baltic republics living outside the country, their national economy has been destroyed, their education has deteriorated. The same fate awaits Ukraine. It will lose, and so much weakened industry, and agriculture, the power that was inherited from the USSR. And the extinction process, when millions of young Ukrainians will look for work and place to live in Western Europe, will become irreversible.

The current Ukrainian "elite" is not the first year leading the Ukrainian ship to death. But even she feels the danger of integration with the European Union. Ukraine faces a split along the Dnieper line. Scenarios can be very different, up to the revolution and civil war. Yanukovych suspended the movement on the vector of European integration, realizing that Yulia Tymoshenko cannot be released and that the economy, which is already breathing its last, simply will not withstand the break of ties with Russia. In addition, this time Moscow clearly does not want to support Kiev’s multi-vector policy. We see the collapse of the “Project Ukraine” as an “independent state” hostile to the rest of Great Russia.

Russia and Ukraine have a better chance of survival if they give up the illusions of Westernism. The global systemic crisis is a kind of harsh exam that only the strong can withstand. The Russian Federation, Ukraine and Belarus must once again become a single power. Otherwise, we can witness how Ukraine will become a “battlefield”, and not only the information war, but the real one.

Ctrl Enter
Noticed oshЫbku Highlight text and press. Ctrl + Enter
We are
What to do with the refugees? Eastern Europe to host thousands of Africans and AsiansMass migration and the question of the survival of the Russian civilization
166 comments
Information
Dear reader, to leave comments on the publication, you must to register.