How the Nazis tried to "dump" the British pound

November 27 2013
10
The largest counterfeiter of all times and peoples is Hitler's Germany, which printed such a huge number of fake British pounds during the Second World War, and of such excellent quality that if they all got into the financial system of Great Britain, it would not stand. 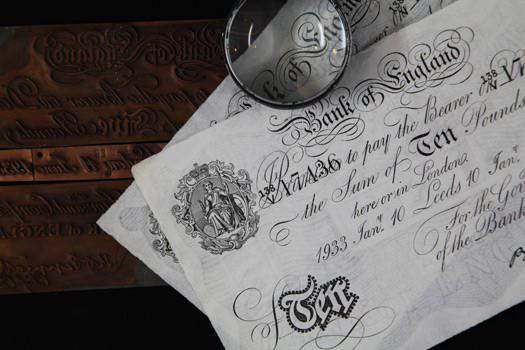 Guided by the principle “all means are good in war”, states have used such means as counterfeiting the bank cards of the other party more than once during the war. England issued fake dollars at war for the independence of the American colonies, by order of Napoleon printed fake pounds sterling, Vienna Bank treasury notes and Russian banknotes. But all the Germans surpassed, who established during the Second World War, the mass production of fake British currency. For a long time after the end of the war, the fake banknotes made by them were a headache.
UK Treasury Department.

For the sake of justice, it should be noted that the British themselves threw the idea to the Nazis. In the fall of 1939, they began to spread fake cards on food and industrial products from airplanes over Germany. Citizens of the Third Reich brought them to the police in bags. The quality of these “London gifts” was so low that there was simply no one who wanted to risk to buy these papers. The Germans picked up the idea and developed it: they decided to drop not the cards from the aircraft, but the money, and they were made so well that even experts could not distinguish a real bill from a fake. The idea was approved by the Führer himself.

The Germans approached the case with their usual thoroughness. First of all, they went to the Interpol archives. The headquarters of the organization established in 1923 was located in Austria, which was the result of the Anschluss as part of Germany. The Nazis scooped out all the documentation they needed from the archives and, relying on such a solid theoretical base, set to work.

An interesting digression. Subsequently, the headquarters of the organization was moved to Berlin and Interpol presidents from 1940 to 1945 were: RSHA head Reinhard Heydrich (1940-1942), head of Department V of the RSHA (criminal police) Arthur Nebe (1942-1943); 3 Head of the RSHA Ernst Kaltenbrunner (1943-1945). I wonder who they caught?

The hard work of the German "specialists"

Initially, the operation was called “Andreas”, led by SS Sturmbannführer Alfred Naujoks. In the town of Spechthausen near Berlin, collected from all over Germany, “narrow specialists” began to implement an ambitious plan.

They stumbled on the very first step - making paper. "Product", similar to English, did not work in any way. Helped intelligence, reported that printed British pounds on paper made from Turkish linen. Naujoks breathed a sigh of relief: he would agree with Turkey. Soon, several tons of Turkish linen were delivered to Spechthausen, which was cut into strips and sent to enterprises where they were used as rags. Specially authorized persons watched each rag. Used material collected and washed. The paper made from it was one-on-one with English samples.

Then engravers and artists began to work. The slightest mistake, inaccuracy - and the work started anew.
At the same time, a group of mathematicians calculated the algorithm for generating the serial numbers of British banknotes: each fake bill had to have its real prototype.
By the end of 1940, Naujoks presented Heydrich with the first samples. 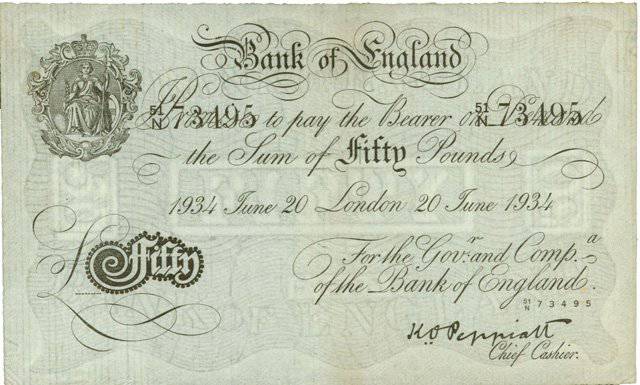 In 1941, the first batch of counterfeit bills were printed. Experts of all German banks recognized them as genuine, but this was not enough for Naujox. Having supplied one of his agents with a large amount of fakes, he sent him (as a reward for good work) on vacation to Switzerland. At the same time, the caring boss anonymously informed the border service that the person crossing the border was a swindler, a fraudster, a smuggler, etc. etc. The agent at the border was subjected to a thorough search, each bill was carefully checked and ... they did not find anything. The indignant vacationer apologized and was released. Having had a good rest in Switzerland and having spent all the money, the agent returned to Germany.

But Naujoks did not satisfy the result. He sent a second agent to one of the major Swiss banks, where he presented a wad of banknotes and a letter from the Reichsbank asking him to check the authenticity of the banknotes. Three days later, the official response came: real money. But the agent also asked for confirmations from London. Bank clerks sent a letter to their English colleagues, asking them to check whether the bills of such series and numbers were issued (the list is attached). The answer was affirmative - German mathematicians did not let us down.
Only after that Naujoks reported to Heydrich about success.

The printing press earned at full capacity. It was made fakes worth half a million pounds. But at the end of 1941, Naujoks began collecting dirt on his boss, and he got burned. Shturmbanführer was demoted as a private and sent to the Eastern Front to "atone for sins." Operation Andreas was curtailed.

In the 1942 year, after the break, the production of counterfeit pounds was resumed. The leadership of the operation was assigned to Bernard Kruger. It goes without saying that this was the most suitable candidate: Kruger had once fought counterfeiters and was considered almost an expert in this field. The operation in honor of its leader was referred to as "Bernhard". 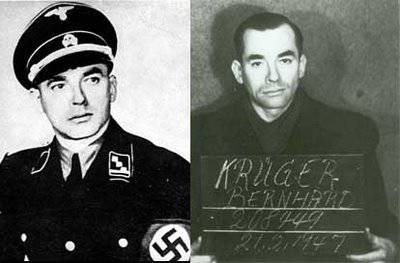 In the concentration camp Sachsenhausen from all over the occupied Europe began to bring typographical workers, the best engravers and artists, former bank employees. A professional counterfeiter among them was only one person - Solomon Smolyanov, a native of Russia (or, more precisely, from Odessa, well, where else!), Who in the 30-s successfully stamped British pounds and sold them in Persia.

In the camp in a separate area built two barracks. One was intended for “working personnel”, the second was “production”. The zone was on a special regime, under the direct supervision of the RSHA, and even the camp commander did not know what was going on behind its fence. The prisoners from the "special command" team were well fed, clothed, not beaten, the working day did not exceed 8 hours. They did not shout at them, talked to them. But none of the privileged prisoners about his fate deceived him. With grim humor, involuntary counterfeiters called themselves "dead people on vacation."

In the special zone, foreign passports, postage stamps, Tito's partisan dinars were used, which were used in the territory liberated by NOAJ, NKVD certificates, and even American dollars. But the main products were Bank of England banknotes in denominations of 5, 10, 20 and 100 £, the mass issue of which was adjusted by the end of 1943 of the year. 500 and 1000 bills were manufactured in small quantities.

Czech Oscar Scala secretly recorded the series and numbers of issued banknotes. According to his records, the Sachsenhausen Mint issued 8.965.080 bills totaling 134.610.810 £ (5 billions at the current exchange rate), of which 10,3 million were fakes of the highest grade.

By the year 1943 in Germany, they did not seriously consider the option of scattering money over British territory from airplanes. The airspace over the English Channel and north of the strait was fully controlled by the British Air Force. Goering did not even have enough planes to carry out this large-scale operation. All forces of the Luftwaffe were involved in the bombing of the industrial capacities of Great Britain.

But the products did not disappear in vain. Gold and jewels, strategic raw materials, the currency of other states were bought for fake pounds, and she paid for agent services. It was Kruger's pounds that German intelligence paid off with its agent Cicero. They were organized by the release of Mussolini.

But the Germans did not achieve the main goal - the undermining of the monetary system of Great Britain. They simply did not have channels for “injecting” such a large amount of money into the British economy. Most of the counterfeit bills remained in Germany. But even the forged fakes brought the British a lot of anxiety. Around the world went millions of "German pounds." Therefore, starting from 1945, the Bank of England gradually withdrawn from circulation all bills larger than 5 £ and replaced them with new ones.

The Last Days of Operation Bernhard

In April 1945, the Germans began to bustle. Production was moved to Mauthausen, but Uncle Kruger’s “printing house” did not work there for long. In early May, the equipment was dismantled and, together with printed pounds, was taken away in an unknown direction, and the “special team” was sent on foot to the concentration camp in Ebensee. The prisoners were confident that Ebensee would become the end point not only of the route, but of their lives. But when they reached the concentration camp, a white flag was already flying over its gate.

Bustle around the mountain lake

Back in the summer of 1945, Lake Toplitzsee in the Austrian Alps caught the attention of American intelligence. Locals claimed that they saw in the first days of May the SS men drowned some boxes in its waters. The American and English divers dived for a long time, but found nothing and left without a dingy jolt. After their departure to the lake area, frequent tourists, mostly from Germany. Some of them were found dead.

In the summer of 1959, a new search party arrived at the lake. The expedition was financed by Stern magazine. One by one, from the bottom of the lake, iron boxes were raised to the surface, in which bundles of counterfeit banknotes were found, the account books of Operation Berngard, matrices, personal names of prisoners involved in the operation, and (sensation!) Part of the PCHA archives. In 1963, the last found box was lifted from the bottom, and the case was officially closed. 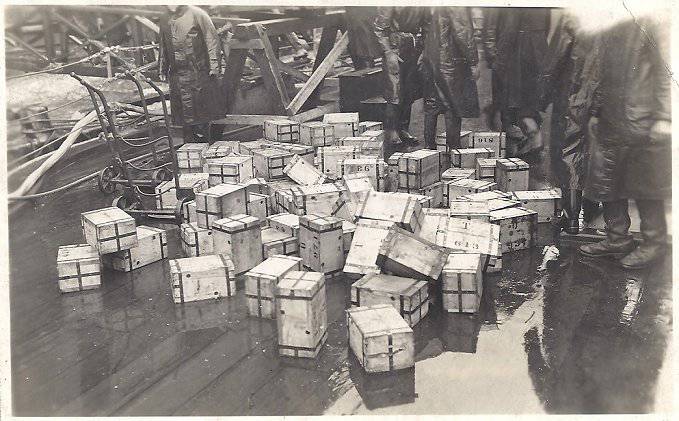 However, locals say that in the vicinity of the lake there are still people who are interested in local beauty the least. Apparently, the lake has not yet given all its secrets.

Ctrl Enter
Noticed oshЫbku Highlight text and press. Ctrl + Enter
We are
Polish Question: Lesson of the Congress of Vienna for Modern RussiaCossacks in World War 1812 of the year. Part II. The invasion and exile of Napoleon
10 comments
Information
Dear reader, to leave comments on the publication, you must to register.