November 27 2013
1
In mid-October, the official Madrid announced its plans to update the naval fleet over the coming years. The budget for the 2014 fiscal year provides for defense spending with a total volume of about 5,74 billion euros, which is 3,2% less than the budget for the current 2013. In this regard, the Ministry of Defense of Spain was forced to reconsider plans for the construction of new ships and the modernization of old ones. So, the construction of the sixth frigate of the Álvaro de Bazán type (also known as the F100 designation) will begin not in 2014, as previously planned, but in 2015. It was previously assumed that next year about 6 million euros will be spent on upgrading the five already built F100 frigates, but so far everything will be limited only to assessing their condition and carrying out repairs to maintain their current condition. Such work will cost 1,5 million euros. 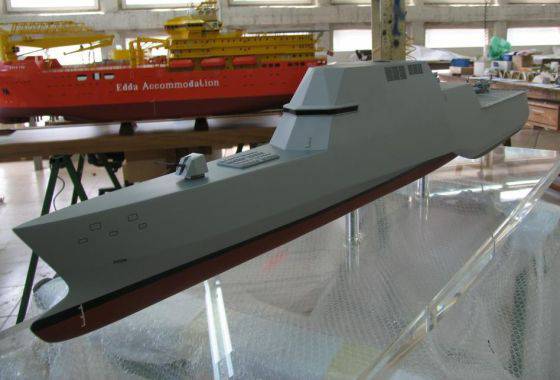 The reduction in the defense budget had an impact not only on the modernization projects of existing ships. In connection with the reduction of costs, Spain is forced to postpone until 2015, the beginning of the main work on the project of promising frigates F110. Preliminary work on this project started back in 2010, however, the creation of technical documentation has not yet begun, which accordingly affects the timing of the implementation of the entire program for the construction of new ships. According to current plans, the first frigates of the F110 should be incorporated into the Spanish Navy at the beginning of the next decade. It is assumed that they will replace the frigates of the Santa Maria type currently in service, representing a slightly modified version of the American ship of the Oliver Hazard Perry type. Not earlier than 2020, it is supposed to begin the write-off of existing Santa Maria frigates, which by that time will have their service life expired.

Currently, the Spanish Navy, in conjunction with Navantia and a number of related organizations, are developing a list of requirements for promising frigates. The main part of the nuances of the appearance has not yet been determined or has been determined, but not published. At the moment, only certain features of the F110 project are known, which do not allow conclusions to be drawn about its prospects.

Earlier it was reported that the naval forces of Spain want to see a project with a wide use of modular architecture, which in recent years has clearly demonstrated its positive aspects. It is expected that the construction of new frigates on a modular basis will reduce their initial cost, as well as significantly reduce the cost of subsequent repairs and upgrades. In addition, it is possible to use interchangeable equipment and weapons, the composition of which can be determined in accordance with the current tasks of the ship.

The modular architecture of various systems is an important project requirement due to the planned service life. Having replenished the navy at the beginning of the next decade, new frigates will have to serve at least until the sixties, after which they will begin to be written off. Thus, over four decades of service, the F110 frigates will most likely have to go through several upgrades, each of which will improve their capabilities in accordance with current requirements.

F110 frigates will be adapted for active combat operations both in coastal zones and offshore. According to reports, the naval forces demand from the project developers to ensure the possibility of fighting surface, submarine and air targets. To ensure the highest possible combat capability, systems with the highest possible automation of various processes will be installed on the ship. In addition, it is assumed the active use of unmanned vehicles of various classes.

The widespread use of automation is expected to reduce the crew and, consequently, reduce the volume allocated for premises for him. Thanks to this, it will be possible to increase the ammunition load and install more specialized systems on ships. The exact composition of weapons and equipment, however, has not yet been announced. Probably, the Spanish command has not yet defined such requirements for the project.

Despite the fact that the F110 project has not yet come out even from the requirements definition stage, Spanish shipbuilders have already shown the layout of a promising frigate. It is quite clear that over the next few years, the appearance of the ship may undergo significant changes and therefore the demonstrated layout will cease to be relevant. Nevertheless, the model of the frigate F110 allows you to get a rough idea of ​​the modern views of the Spanish Navy and designers.

The appearance of the layout clearly demonstrates the chosen way of constructing the hull and superstructure. The outer contours of the ship consist of a large number of straight panels, mated with each other at different angles. With this hull and superstructure design, the ship’s visibility to radar systems can be significantly reduced. The only structural element that violates the “smooth” contours is an artillery installation in the bow of the ship. Perhaps in the future it will receive a casing, as proposed to do on the newest US destroyers of the Zumwalt type. Antennas of various electronic systems will be hidden under the cover on the superstructure.

Interesting hull lines of the ship, including its underwater part. The bow part of the body has the usual pointed shape with a “classic” stem. However, the upper part of the hull sides expands to the superstructure and turns into a relatively wide aft. To ensure stability, the stern of the ship has a characteristic trimaran shape. Such a layout allows for sufficiently large internal volumes of the hull and superstructure, as well as a large area of ​​the landing site at the stern. It is worth noting that the USS Independence coastal zone (LCS-2) American ship was built in a similar way.

Between the artillery system and the superstructure on the model is placed a vertical launcher for guided missiles. Such weapons, developed in other countries, have long confirmed their capabilities and ease of use. Now, apparently, a similar system intends to develop or purchase abroad and Spain. There is reason to believe that before the superstructure of the advanced frigate F110 there will be a universal launcher, suitable for launching missiles of various classes and types.

In the aft part of the layout, a relatively wide and long landing platform is visible. In addition, the front part of the superstructure can accommodate a helicopter hangar. Thus, F110 frigates will be able to expand their capabilities through the use of transport, anti-submarine or search and rescue helicopters.

A careful examination of the layout of the frigate F110 presented by Spain is difficult to get rid of associations with the newest US ships. The Spanish frigate has common features with American projects of destroyers Zumwalt and ships of the coastal zone Independence. It is quite possible that, while forming the requirements for their own promising frigate, the Spanish naval forces borrow some ideas from American shipbuilders, which is imprinted in the characteristic appearance of the layout. On the other hand, after conducting a series of studies, Spanish designers could come to the same conclusions as their American counterparts a few years ago. But, regardless of the specific reasons, the similarity of the projects, at least in terms of appearance, is noticeable at first glance.

Work is continuing to determine the requirements for the promising frigate F110. Creating a project, in accordance with current plans, will begin only in 2015 year. At the same time, we cannot exclude a new postponement due to another reduction in the defense budget. The consequence of this will be a shift in the time of taking new ships into service, and this can have big consequences. In the future, F110 frigates are to replace Santa Maria ships whose service life expires early in the next decade. Thus, no more than 5-7 years remain for the development and construction of new frigates, otherwise new ships will not be able to replace obsolete ones in time.

Changing the timing of the project may adversely affect its technical part. Reducing the time to create project documentation can lead to the exclusion or transfer of work in some areas. Fortunately, some parts of the project can be implemented later, aided by the modular system architecture. Nevertheless, the development of a frigate in a tight time frame can lead to a variety of consequences.

Until 2015, the Spanish Navy and shipbuilding industry will continue to work on the requirements for the frigates of the F110 project. It is possible that in the very near future, some of the requirements for these ships will change. Because of this, in particular, the emergence of a new layout, assembled in accordance with current views on the appearance of the frigates, is possible. Since about one and a half years are left before the start of the design work, the preliminary appearance of the ship may undergo significant changes. What it will be in the final version - we will know only by the end of the decade, when the construction of the main frigate F110 will begin.