Mine war on the roads of Chechnya 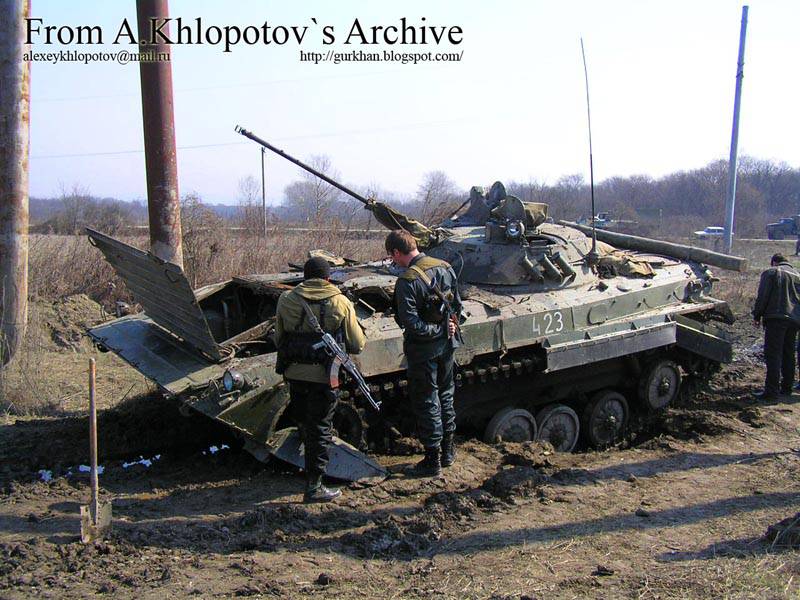 The lingering nature of the hostilities in Chechnya, the specifics of their conduct, the instability of the situation, the peculiarities of the physical-geographical conditions and even the national ones directly influence the nature and extent of the mine warfare. If, at the stage of bringing in troops and conducting active battles for the city of Grozny and other settlements of Chechnya, from December 1994 to summer 1995, mine-blasting barriers were used by illegal armed groups (IAF) in rare cases, mines were installed unprofessionally and even without fuses , then from July – August of 1995, mining operations became significantly more active.


In the classical understanding of a mine war involves the use of mines unlimited in scale, place, time and type of hostilities. In Chechnya, it has a number of features.

1. Instead of the traditional minefields, which form the basis of the classical barrier system, guided and unguided land mines, individual mines and groups of mines, as well as hand grenades mounted on braces, are the most common.

2. The bulk of the mine-explosive barriers were placed on the roads, so the road mine war was fought first of all.

3. The main means of warfare are not engineering mines, as usual, but artillery and aviation ammunition, hand grenades, adapted using improvised means for use as landmines, traps.

4. The impulsive nature of mine warfare, the dependence of the activity of the illegal armed formations on mining on the military-political conditions, the nature of the actions of federal forces, weather conditions. 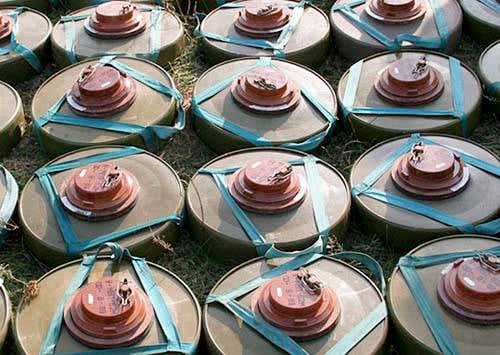 The main parameters of a mine war are characterized by the volume of mine-explosive obstacles. These volumes consisted of mines, land mines and other explosive devices used by the illegal armed groups and federal troops, as well as from those unexploded explosive objects and abandoned ammunition that remained after the hostilities.

The federal troops set up mine-blast barriers only to cover base areas, roadblocks and important objects. As a rule, these are controlled minefields from the sets UMP-3, VKPM-1 and VKPM-2. In rare cases - minefields from mines of OZM-72 in unmanaged version. All barriers were carefully fixed.

Illegal armed formations established mainly landmines and individual mines, sometimes primitive anti-personnel and mixed minefields (in the areas of settlements of Bamut, Argun, etc.), whose true volumes are difficult to estimate. At the same time, the number of land mines and mines found, as well as the number of explosions on them, characterizes the scale of the mine war. The analysis shows that the maximum number of explosions occurs in July, September, November 1995, and the minimum - in January, 1996. Of the total number of explosions per year, about 30 percent are on grenades with banners, installed by their troops. 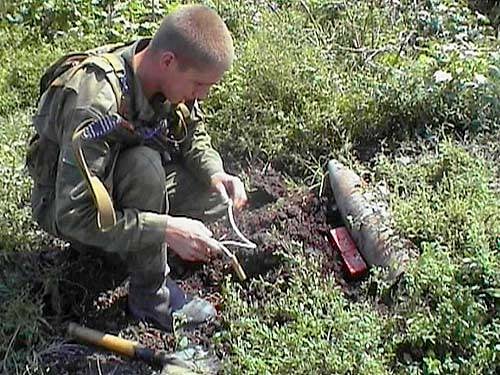 Along with the quantitative increase in the use of illegal armed formations of mine-explosive barriers (MVZ), there has been a significant improvement in the quality of the means used. These facts indicate that the enemy has reached a new level of mine warfare.

Unexploded explosive objects (GP) pose a serious danger to troops and civilians. These include dropped aerial bombs and ammunition that have passed the bore, for some reason did not work, as well as left in the firing positions and field depots ammunition, not powered. The entire territory of Chechnya, especially those areas where active hostilities were conducted, is literally packed with explosive objects. Their volumes can be characterized to some extent by the number of GPs found and destroyed, although the intensity of this task is different and depends on the situation.

We give the following data. The units and subunits of the engineering troops explored and cleared 54 thousand hectares; 1060 buildings and structures; 793 facility (in the interests of 16 ministries and departments); 780 km of power lines; 775 km of roads.

Total discovered and destroyed: 11600 engineering mines; 99200 artillery shells; 75400 mortar mines; 1280 ATGM; 86500 grenade; 195 aerial bombs; 195925 other GPs.
These figures characterize the scale of the mine war on the roads of Chechnya, indicate a great danger to the troops and the civilian population, show the urgent need for active counteraction and to minimize losses in personnel and equipment. 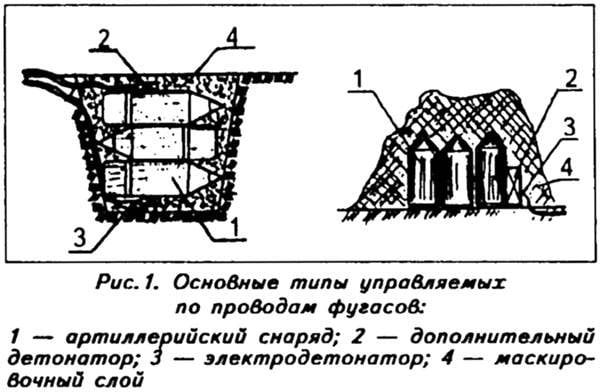 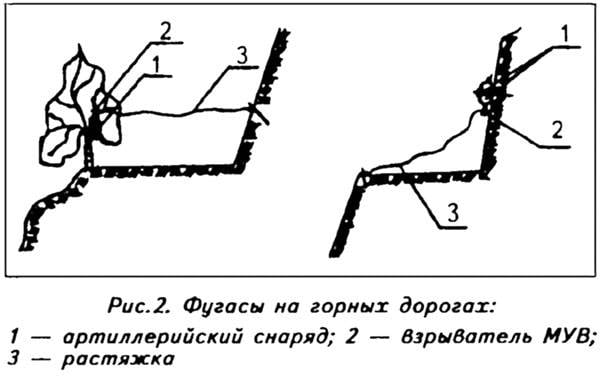 For the mining of roads, illegal armed formations used guided and uncontrolled land mines, anti-tank and anti-personnel mines. For example, in the period 11 of July to 8 of August 1996, 85 of land mines were used against federal forces, of which 76 were detected and neutralized by sappers. Preference was given to wire-driven land mines for defeating military equipment and personnel of the assault force on armor.

The bomb usually consisted of one or more artillery (aircraft) ammunition, electric detonator, additional detonator and control line (Fig.1). They were installed on the side of the road at a distance from 2 to 8 m from the roadway. During the explosion, a powerful fragmentation flow and an air shock wave were formed, inflicting damage to personnel in a radius of up to 70 m. In some cases, the explosion completely disabled the equipment and crew. 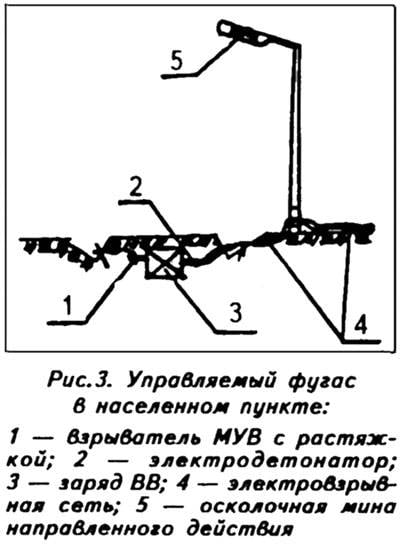 Most land mines were installed on the ground surface or in the ground with a camouflage layer thickness from 5 to 20. Sometimes they were hiding in a broken, burnt vehicle thrown on the side of the road. As the control line of the explosion is usually used wire control lines from the ATGM. The distance from the place where the gunman was watching the road and choosing the target was up to 500 m.

On the mountain roads of the illegal armed groups, landmines were planted in the crowns of trees growing near the road (22 percent of explosions of the total number for the period of hostilities in the Czech Republic) or on rocky slopes near the road (fig.2). With the explosion of such land mines amazed personnel in the radius 6 – 8 m.

To prevent the advancement of federal troops along the channels of mountain rivers, the enemy often used land mines and anti-tank mines set up in water.

In localities, illegal armed formations often used controlled land mines, driven by a working electrical network. In the roadway they put (as a rule, in an non-removable position) a charge of mass 5 – 10 kg. In located on the pole of the electric lighting, the ceiling was mounted fragmentation mine (Fig.3). The control lines led to the power plates and detachable devices of electrical networks. At the entrance of the equipment of the federal troops in the affected area, voltage was applied to the electric detonator. Explosion of a landmine hit the technique and personnel in the radius 4 – 8 m.

As a rule, landmines were covered by small-arms fire. weaponstherefore, the works on their neutralization were difficult and dangerous. The commanders of engineering and sapper units, which ensured the conduct of hostilities, successfully carried out the task of demining roads. Some officers have in their account more than ten landfills of an illegal armed formation. High professional training of sappers, and first of all commanders of subdivisions, made it possible to successfully ensure the passage of convoys of troops.

Ctrl Enter
Noticed oshЫbku Highlight text and press. Ctrl + Enter
We are
Anti-personnel mines of the PMD-6 familyTechnique of special secrecy. Soviet radio-controlled land mines
51 comment
Information
Dear reader, to leave comments on the publication, you must to register.