Why has the number of Russians, who believe that Russia has enemies, increased dramatically?

November 30 2013
249
On November 26, the Levada analytical center published the results of a remarkable sociological survey. In the course of this survey, respondents were asked on the streets of cities and rural settlements whether they consider that Russia today has enemies. In aggregate, the question was asked by 1603 to Russian citizens living in the 45 regions of the country. According to the information provided by the Levada Center, the error during such a survey does not exceed the value in 3,4%.


The survey results are as follows:

78% respondents said that Russia has enemies (the direct answer is yes), 13% answered that the Russian Federation has no enemies (direct answer is no), yet 9% give an unequivocal answer found it difficult.

The Levada Center has been asking similar questions to Russians on the streets in recent years, and therefore it will be interesting to compare the results obtained in the current year with the results of previous similar polls.

It turned out that the survey results of the 2013 sample of the year are very similar to the results of the survey of the 10 model that had been done years ago. Then the same 78% of respondents said they were confident that there were enemies of Russia. Both of these results in terms of the percentage of respondents who answered the question "yes" are maximum. In other years, the number of "yes" answers was lower. Somewhat strange, but the minimum number who believe that Russia has enemies, was noted only a year ago - 63%. Just a year - and what a sharp jump - immediately to 15%. At the same time, there were no particularly sharp changes in the direction of any external or internal forces in relation to the Russian state (and precisely in the negative direction). What is the reason for such a sharp increase in the percentage of those who said “yes” about the presence of enemies in Russia? 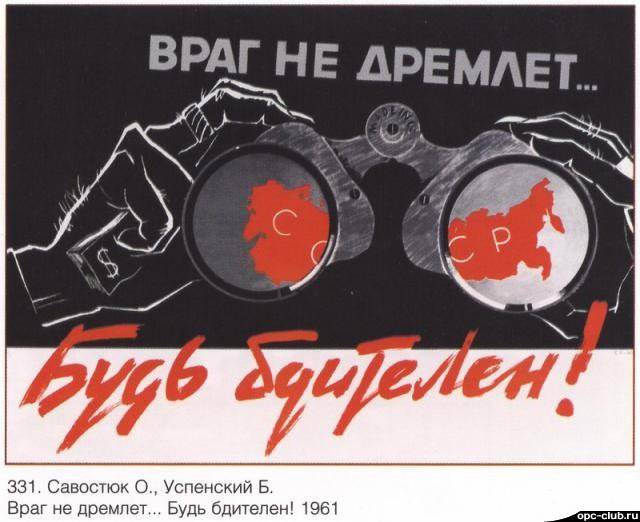 There is an opinion that a few years ago, the overwhelming majority of Russians steadfastly associated Russia with a single whole, both with the government and with the authorities of other levels. Therefore, the question itself could be interpreted as a question about the presence of enemies from Russia directly (both from the country and its people) and from the authorities who were called upon to defend the interests of the people. Well, in the conventional sense, the image of the enemy of Russia was considered something like the United States of America, the CIA, British intelligence or, for example, the cultivation of world extremism by Qatar and Saudi Arabia. Here, for the majority, a clear line of time could have appeared: for example, the USA or Saudi Arabia are enemies and that's it. With regard to such a definition of the enemy of Russia, one can, of course, have a long discussion, but this discussion will not change the essence, as most people who are convinced that it is the United States trio, Qatar and the Saudis - our (Russian) main enemies will not dissuade.

But for some time (especially after high-profile corruption scandals and some self-exclusion of government officials from the need to punish the guilty), such associations for some Russians have lost some relevance, and people began to think about whether this self-exclusion is not a signal. - A signal that the enemies of Russia may well be, as they say, not only somewhere overseas or in the palace of some Arabian crown prince or sheikh, but, for example, in the “same cabin” with representatives of the Russian authorities of various levels . And if these hypothetical enemies in the same cabin are allowed, it means that the level of trust in those who allow them “into the cabin” in the country also began to decline.

In other words, a significant percentage of Russians in response to the presence of enemies in Russia implied not only external enemies (American "democratization" or some kind of Al-Qaeda), but also internal enemies. Someone saw among them representatives of the so-called non-systemic opposition, who even from the president’s participation in the Literary Assembly, tried to make a political show, and someone by the enemies of Russia meant high-ranking corrupt officials who managed to more than significantly improve the state budget and other state property. your financial situation. It is this fact that can be attributed to why, compared to last year, the number of Russians, who believe that Russia has enemies, jumped immediately to 15%.

It turns out that the survey of the “Levada Center”, or rather its results of the 2013 sample of the year (if they are, of course, believed), was marked by some significant change in the minds of the citizens of the country. If recently the overwhelming majority of compatriots among the enemies of Russia were ranked except the notorious Russophobes of John McCain and Zbigniew Brzezinski, cowardly puppets like Mikhail Saakashvili and Viktor Yushchenko, notorious villains from the assortment of Basayev, Raduyev, and the same, they are the same, they are the same, they are the same, they are the same, they are the same. homegrown "frames." Why? Is there anything reprehensible in this assessment? Or the person who stole (or whose personal fault was stolen) billions of people's funds caused less damage to Russia than any John McCain, who did not overcome the Cold War syndrome ... Did the people who warm their hands on the Olympic construction site, on the allocation of housing for servicemen, on the implementation of "non-core" real estate to third parties, on the protection of underground gambling clubs, on money laundering through offshore companies (the list can be continued for a long time) - are these not enemies of the state? Are mayors, “sirs” and “peers”, who use their party card to solve their own financial problems to the detriment of the region and people entrusted to them, this region is not the enemies of Russia? .. (And even if you don’t mention alcoholism and drug addiction literally mowing the population).

If we are guided by this very thought, then even somehow it is difficult to understand those 13% of Russians who said that our country has no enemies. I do not Anatoly Serdyukov with all his protégés and other similar characters were among the respondents "Levada Center" ...

Ctrl Enter
Noticed oshЫbku Highlight text and press. Ctrl + Enter
We are
Results of the week. "God forbid to see Russian revolt, senseless and merciless!"Results of the week. “Why is the war going on? Do they not read newspapers? ”
249 comments
Information
Dear reader, to leave comments on the publication, you must to register.