Tsatskie yes brooches. It's wrong with us with the premium system

November 27 2013
147
As you know, Mikhail Gorbachev, to his 80 anniversary, was awarded the Order of St. Andrew the First-Called - the highest award of modern Russia. And for what services - to the broad masses of the people is not quite clear (more precisely, it is completely incomprehensible). Lived up to 80 years? So is not he alone in the country made a similar feat. Now all the old men to award this order? And the rest of the accomplishments of the former Secretary General, to put it mildly, are more than debatable. And it's time to stop distributing state awards for anniversaries, and even more so for pseudo anniversaries (when you don’t reward, and sometimes you need to flog, and it must be done mercilessly). Only this episode alone says that there is no special order in the country either in the awards or in the award system itself.


To begin with, I will cite an excerpt from the book by Oleg Kurylev, The Battle Awards of the Third Reich. Illustrated Encyclopedia. M., publishing house EKSMO, 2005, 352 p., Ill. Allocations in the text made by me.

“Branding Nazism is, of course, necessary when it comes to concentration camps, the“ final decision ”and other delusional plans of the National Socialists. But, arguing about the phenomenon of the German military machine, which twice shaken Europe in the last century, and with it a significant part of the world, it is more useful, perhaps, to understand what motivated the German army, what such reasons and secrets made it qualitatively better in the first half of XX century, why the German soldier endured the cold and hunger of the environment for months, and did not plod, bowed his head dejectedly, to surrender to the victor’s mercy on the third day, realizing that no one would help him. What made the German proud of his uniform, banner, regiment and commander? Why clothes, designed for maintenance of equipment or landing from aircraft, became the most honorable and ceremonial? Why, after both lost wars, veterans proudly carried their awards, realizing that the people cannot reproach them for defeat? 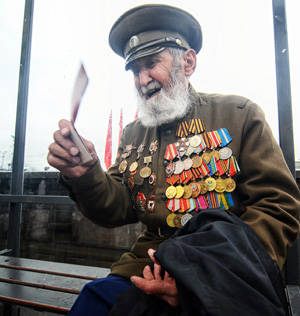 These are not rhetorical questions. It would be nice to get answers to them in order to understand and learn. In this regard, the German uniform is extremely interesting, his история and role in the fate of the Third Reich.

In the preface to the book by Brian Lee Davis “Uniforms of the Third Reich”, the author clearly noted that if the German army of that time was dressed in faceless and dull service jackets like those worn in China in 50 – 60's, then it is unlikely to have to such success. When an officer wears the same, relatively speaking, kolovorotku, as an ordinary, and his distinctive sign is a nondescript diamond on the collar, neither one nor the other have any pride in their uniform (it is the uniform, not the uniform). When countries can give the highest award for a military feat, and the chairman of a collective farm for the anniversary (this is about the Order of Lenin), its value and desire are not worth the gold and platinum that went to make it. A well thought out, rigorous and compact reward system creates a huge incentive for self-sacrifice. Remember Prince Andrew, a clever and rational man, who nevertheless is ready to die in a moment of glory. But die beautiful. Even realizing that only soldiers can see this death. Own and others. Not the highest light, not women, not familiar.

Everyone has seen many times in the movies or in the old newsreel of the German Iron Cross. But how many people imagine what this award meant for the German soldier, for the German in general, the whole army as a whole throughout its nearly two centuries of history. In such items, magic power is sometimes concentrated, the effect of which on people is often underestimated. Those politicians who realized that PRIDE should not only be a word or a call, but also have a visible embodiment in the banner, uniform, and awards, could create subordinates of a single will, nation, army and state.

An iron cross, a steel helmet, an imperial eagle are not just well-known accessories. These are symbols of that Germany, forever inscribed in its history, as well as in the history of mankind. Albeit not on its most joyful pages. Yes, they were not in the endless series of wars and pauses to prepare for new ones. ”

To understand that we have something wrong with the award system, just look at our veterans. It hurts to look at them from time to time. The rule of good tone in old men began to be hung with all sorts of badges from the throat to the knees. And some wear their badges in rows, others - herringbone, the third - in a square-nested way, the fourth - in the style of artistic disorder. Amidst all this pseudo magnificence, there are a lot of homemade / self-made awards. And there are almost no deserved battles on the fields. Given the age (most at the time of the end of hostilities were simple soldiers), one or two maximum.

There are a lot of stories when young people ask for old men, pseudo-awaited from head to toe: “Grandfather, call me to me!”. And it seems like our grandfathers are mortally offended. But after all, these offensive sentences have, forgive, their reason. The youth intuitively, on a subconscious level, feel the true value of these fake orders and medals. And for an example: such a request - “tsatskami tune” cannot be heard in Germany, addressed, say, to the Knight’s Cross knight. First, one cross on the neck does not give way to a bell, no matter how hard you try. Well, the Germans do not hang themselves seven to ten kilograms of awards for one jacket. And secondly, everyone in Germany knows that this cross is awarded exclusively to those who were on the battlefield and solely for great military achievements. It was impossible to get it, sitting in a bunker in the rear, for extrajudicial executions and expulsions, for hard labor on farmlands, for feats in dungeons. In Germany such a cross is worn only by an infantryman, a pilot, a submariner, a tankman.

It is clear that our old people are like children. The more I hung, the more Ponte (forgive me, my God, for such a language). Many grandfathers are frankly ill, and a significant part (not excluding multi-star generals) is sorrowful with the mind. But where is the role of the state? Why not bring an elementary order to this question?

And what's the point of rewarding all old men without exception for the next holiday with pseudo-medals? Or, as before, in 1985, when all participants in the war were awarded the Order of the Patriotic War. What is the value of this award now after massively / polls hands? I have never been a supporter of all sorts of conspiracy theories (for even without this fools in the country have been in store for the next hundred years with excess). But maybe there is some kind of malicious intent in the fact that representatives of the army-victorious great powers look like discharged parrots and even outwardly do not cause any respect? And there is one not completely clear question from the point of view of simple arithmetic. If for every German aircraft shot down, burned German tank, drowned ship, if for one killed and wounded soldier and officer of the Wehrmacht there are several of our units of equipment and military personnel of the Red Army, then where does this premium magnificence come from? Somehow it does not add up.

Why are there old men. What is today, say, the value of the Gold Star medal of the Hero of the Russian Federation, if you can get it for feats on the battlefields, and for puffing on a wrestling mat? Or wound snot in a fist on the track - and you are the Hero of Russia?

Or else he destroyed the army and navy under zero, even without a second having been in the combat area for a long 43-year military service (it’s not even about exploits, but only about the very fact of being in the place where they are firing) and to hang a secret decree the Star of the Hero of the Russian Federation? Yes, below stick a reborn George Cross in the bargain. Maybe that is why the “Golden Star” of the Hero of modern Russia in certain circles became known as a brooch?

What to do? At least put things in order, with an iron hand. It is completely obvious what is needed:? 1. Stop the jubilee awards. 2. Prohibit the wearing of commemorative medals, including rewards for years of service (and previously issued medals put in boxes and stored in the chest of drawers). 3. Strictly prohibit the sharing of state awards and any kind of badge (any, with the exception of the high school graduation mark, class mark and the Guard badge) 4. Punish the wearing of self-made awards. 5. It is hard to establish how many and what items can be on the uniform of a serviceman (no more than five or six). 6. Develop all the clear rules of wearing state awards and punish them for violation (and it is very simple to punish: you dress up with a tropical parrot - do not let them go to meetings, concerts, stands). 7. Only carry rewards for feats on the battlefield - and no others.

Is there at least one example of the correct wearing of state awards in domestic films? Oddly enough, there is - this is the Kuban Cossacks ribbon. Take a closer look, with what dignity and how beautifully they wear orders and medals of the USSR.

Ctrl Enter
Noticed oshЫbku Highlight text and press. Ctrl + Enter
We are
Financial and political secrets of Oleg Pyagnibok and Vitaly KlitschkoUnknown Hero of Russia - who are you?
147 comments
Information
Dear reader, to leave comments on the publication, you must to register.