November 27 2013
23
After decades of warfare, only two countries in the western part of the former Yugoslavia fly modern jet aircraft: Serbia and Croatia. Both countries announced plans to operate at least one regiment of modern multi-role jet fighters. Until new fighters appear, two MiG-21bis armed with R-60 air-to-air missiles will be on combat duty in the air forces of both countries. Aviation Both countries are racing against time, as existing planes need to be replaced until they finally exhaust their resources. But the limited funds means that both countries must keep in mind the option in which the MiG-21 will remain in combat force for the next several years.

In the Serbian Air Force and Air Defense, all fighters are concentrated in one unit, the Vityaz 101 Fighter Regiment from the 204 Air Brigade, located at the Bataynitsa airfield. Four MiG-29 fly in the 1 link - three single MiG-29B (local designation L-18) and one “Spark” MiG-29UB (NL-18). These are the only surviving planes from 16 received in 1987-1988. 11 were destroyed during the Kosovo war in 1999. All remaining planes were decommissioned in 2005 due to resource development. 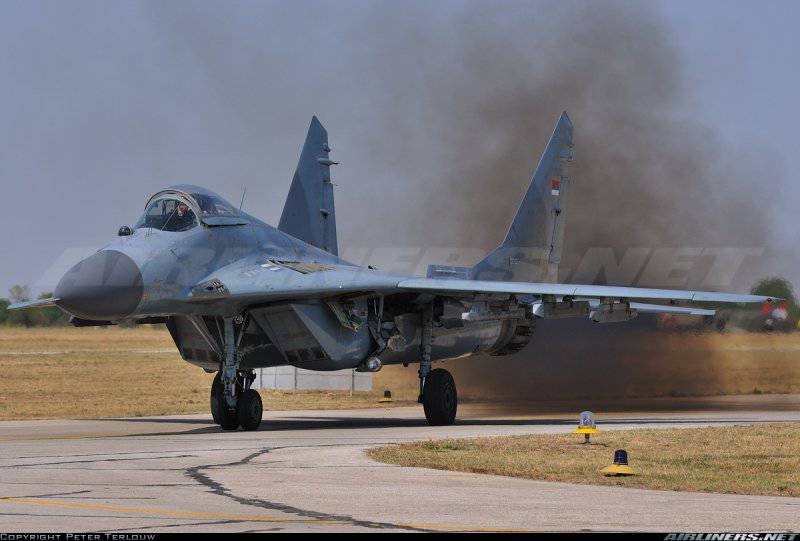 In December, 2006 signed a contract with the Russian company RAC "MiG" for the repair and limited modernization of five MiG-29, the purchase of a flight simulator, new P-27Р1 missiles and spare parts. Four MiG-29s were returned to service in 2008, but one aircraft was destroyed in a flight incident in 2009. Work on the fifth aircraft was completed in 2011, thus all aircraft were extended for ten years or 700 flight operations hours On combat duty, the Serbian MiG-29 is usually armed with P-73 and P-60 missiles; Another frequently used combination is the suspension of two P-27 missiles and four P-60 or six P-73 / P-60 for close-to-air combat. Pilots who are chosen for service on the MiG-29 belong to older ages, usually in the 40 years. In 2011, two Serbian MiG-29s used the P-60 missiles for the first time at the Saber range on the Black Sea coast of Bulgaria. They relocated to the Bulgarian air base Graf Ignatievo to participate in the exercises, which were held jointly with the Bulgarian colleagues on their MiG-29. The next joint exercise is scheduled for 2014. At the same time, Bulgarian pilots will visit their colleagues in Serbia for training on the MiG-29 flight simulator.

The remaining units of the 101 regiment (2 and 3 link, as well as the 4 reconnaissance link) fly to the MiG-21. On paper, the regiment consists of two 28 fighter jets - 21 MiG-21bis (L-17, including two reconnaissance versions equipped with Vinten 880 and 753A cameras) and seven two-seater MiG-21UM (NL-16Sh). But in fact, most of them have developed their resource, while others do not fly due to the lack of spare parts, the remaining ones are simply declared redundant for the existing tasks. 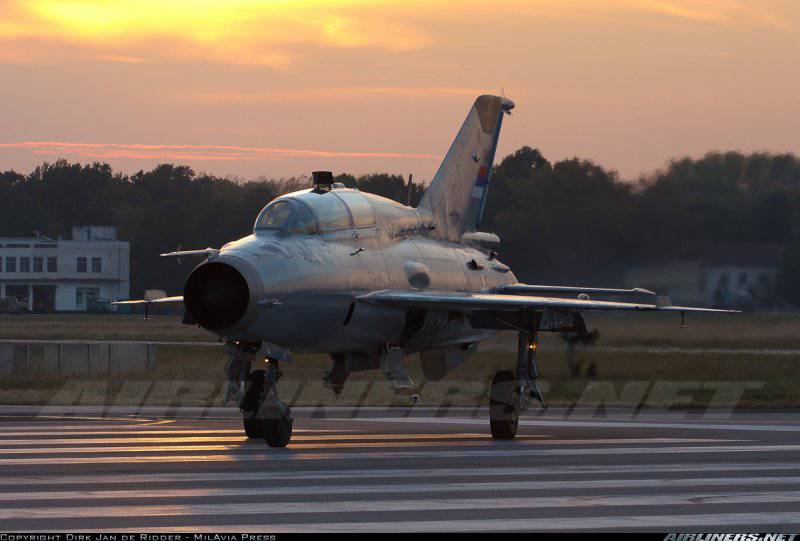 In general, the MiG-21 resource is 30 years or 2400 hours for the bis version and 3600 hours for the Sparks. The overhaul period is 10 years or 750-850 hours. Medium repair for the Serbian Air Force and Air Defense is carried out at the aircraft repair company Moma Stanojlovic, located at the air base of Batainic. An alternative approach is to use the 24 Aviation Technical Battalion of the 204 Aviation Brigade for expedited repairs, which extends the life for five years or 500 hours, and the total resource to 35 years. But only two single-seater fighters have permission to fly up to 2013, and the resource of two “Sparks” expires in 2016 and 2019.

Given the fact that the combat duty is carried by two MiG-21bis, there is little time left until the day when the small fleet of MiG-29 will carry the country's air defense exclusively on its own. In 2010, the Ministry of Defense sent a request for information to aircraft manufacturers and received answers from companies producing Eurofighter, Rafale, Su-30MK2, MiG-29М, F-16C / D Block 52 and JF-17 fighters.

Of course, the cost will be the determining factor. Current modernization plans provide for the simultaneous purchase of three complex systems: a multifunctional combat aircraft, an intermediate-range air defense missile system, and two 3D radars to monitor the airspace. The funds necessary for this are so large that a special law will be required to allow such an acquisition, since it exceeds the volume of the regular military budget. Since this is still not enough, the Serbian Air Force and Air Defense also plan to upgrade the 14 light attack aircraft Galeb G-4 to the G-4MD version, which will allow them to be used for in-depth training of new fighter pilots. But in fact, very little of what is planned will be realized, if at all.

Serbia's defense budget for 2013 is 533 million euros, of which only 34,45 million is for arms purchases and equipment. The funding of the Galeb G-4MD attack, Kub-М2 air defense systems and surveillance systems has been approved for funding.

The Croatian air force and air defense are currently armed with ten MiG-21 - six MiG-21bisD and four MiG-21UMD, which are part of the Combat Aircraft Regiment, based on the 91 base at Pleso airport near Zagreb. Due to a chronic shortage of spare parts, ongoing training is not carried out regularly, which calls into question the maintenance of combat duty on an ongoing basis.

History the receipt of the MiG-21 by the Croatian Air Force and Air Defense goes out during the civil war at the beginning of the 1990-s. In 1992, three pilots deserted from the federal Air Force of Yugoslavia, and flew to Croatia on their MiG-21bis. Of these, two aircraft were shot down by the Serbs during the fighting, and the third was written off. 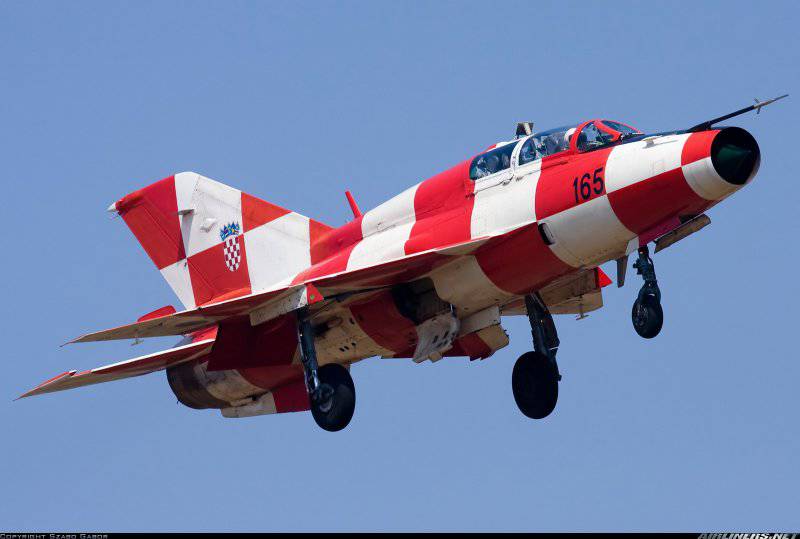 New shipments of MiG-21bis and UM illegally took place from Ukraine in 1993-1994. bypassing the UN embargo, as a result, by the end of the fighting in 1995, there were at least 23 MiG-21bis and four “Sparky” MiG-21US / UM. At present, aviation consists of six MiG-21bisD, remaining eight, that has been repaired at the Romanian Aerostar enterprise, as well as four MiG-21UMD repaired there. The work carried out by Aerostar extended the service life of the aircraft by 10 years, which has almost been exhausted. Plans to replace the MiG-21 were postponed and the best that can be hoped for is the availability of funds that will extend the life of the aircraft and it is possible to buy aircraft in Ukraine.

After reviewing the proposals of new and used aircraft from Russia, the USA, Germany, Sweden and Israel, Croatia decided to stop repairing its MiGs in Ukraine or Romania. Additional MiG-21bis must also be acquired to form a full-fledged squadron of 12 aircraft, as well as four two-seater aircraft. Expenses in the amount of 20 million euros will be paid from the budget in 2013 and 2014. [As is known, in July 2013, the contract for the repair of seven Croatian MiG-21 in Ukraine and the supply of five more aircraft of the same type was signed - approx. Periscope].

Croatia has become a leader in the organization of regional air defense. The Croatian Air Force and Air Defense are integrated into the NATO Integrated Air Defense and Missile Defense System (NATINADS), which uses data obtained from the participating countries to protect NATO territory. From June 2011, he began to receive information from radar stations located in Bosnia-Herzegovina. There are plans for its integration with Montenegro, and in the long term, the airspace of both countries can be defended by Croatian fighter jets.

With the exception of Serbia and Croatia, all other countries in the region have withdrawn combat aircraft from service and rely on NATINADS. When Bosnia-Herzegovina, Montenegro and Macedonia are integrated into the data exchange system, their participation will be to assist in the observation of airspace and the development of the ground component of the air defense system.

Ctrl Enter
Noticed oshЫbku Highlight text and press. Ctrl + Enter
We are
MiG-23 fighters in AfghanistanMiG-21 in Afghanistan
23 comments
Information
Dear reader, to leave comments on the publication, you must to register.