Putin: Domestic engine-building should not depend on imports 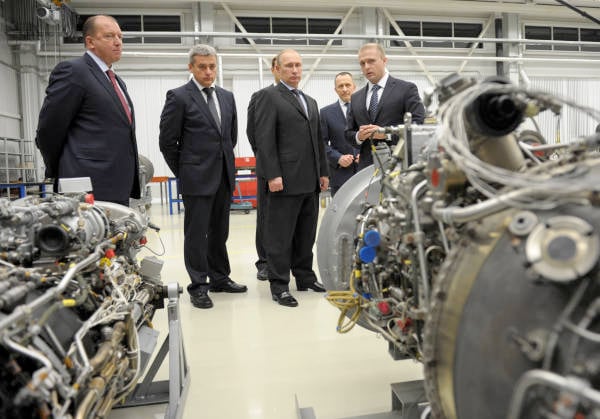 Vladimir Putin decided to talk about the prospects for the Russian aviation engine industry, including measures of state support, at the Klimov plant in St. Petersburg - one of the leading developers and manufacturers of gas turbine engines. Before meeting with officials, the head of state examined the training center, workshops and new production lines.


“Our task is to strengthen the research and production, personnel potential of domestic aviation engine-building enterprises,” the president said. “I must say, I have long wanted to see you and talk on these topics, because the prospects directly in your industry depend on what our aviation industry for the future. "

"Well, to be honest, you know it well, if in combat aviation there are natural problems that are being resolved and, I am sure, will be resolved, for the civilian aircraft industry, engine building is one of the most essential elements that so far, frankly, do not allow us to break into the world market - Putin did not hide the problems. “And your own carrier companies, you know how they buy our equipment: primarily based on the characteristics associated with noise, fuel consumption, and other characteristics.”

The President recalled why, in fact, the United Engine-Building Corporation was created, in which technological, intellectual and financial resources were concentrated. And there is already progress: in comparison with 2009, the engine output doubled a year, the product line was expanded, new engine development projects were launched, there is a demand abroad, especially with regard to helicopter technology. “Last year alone, the company's export deliveries exceeded 43 billion rubles. This is almost half of the corporation’s total revenue,” he cited figures.

Products must be innovative and high-quality, outlined the head of state. It is necessary to produce more engines certified according to international requirements and standards. “Of course, this is a complicated, long procedure, but it is this that opens up new international markets for us,” he explained.

“In recent years, as part of the state armaments program, we have seriously increased the volume of orders for combat aircraft and helicopters,” Putin recalled. “And we are talking about technology with fundamentally new, higher technical characteristics.” The president wanted to know how much such an expansion of production was provided by a promising engine range. Including how the engine is being tested for the fifth generation fighter, as well as the creation of an engine for a promising high-speed helicopter. “As for the fifth generation fighter, we know which engine it flies today. In principle, the test pilots are satisfied, but we also know very well what tasks are in this regard,” he noted.

In civil aviation, one of the key priorities is the new MS-21 medium-haul passenger aircraft. "I know that the demonstration engine for this machine is ready and is being tested. It is important not to delay its certification so that we can start mass production as scheduled," the head of state defined the tasks.

“Special efforts should be focused on ensuring the independence of Russian aircraft industry from foreign engine manufacturers, as well as on the supply of imported components,” the president said. “So far, the share of imports is in some cases quite high.” For individual helicopter engines can reach 80%. “We need to develop our own component base, increase the depth of localization of production,” Putin added.

"For the further development of the United Engine-Building Corporation, it is important to solve all financial problems," the head of state explained. "This directly concerns the reduction of the existing debt burden ... Despite the fact that the corporation’s revenue has been actively growing in recent years, it remains unprofitable - for the debts inherited from the enterprises included in it.Of course, we need some fresh approaches, issues related to the rehabilitation, in which it is necessary to take measures to reduce the debt load and production erzhek, as well as the optimization of the product portfolio of the JDC. "

After the meeting, the president came to the opening of the World Sambo Championship at the Yubileiny Sports Palace and presented awards to the winners of the first day of the competition.

Ctrl Enter
Noticed oshЫbku Highlight text and press. Ctrl + Enter
We are
In St. Petersburg opened a naval salon
101 comment
Information
Dear reader, to leave comments on the publication, you must to register.