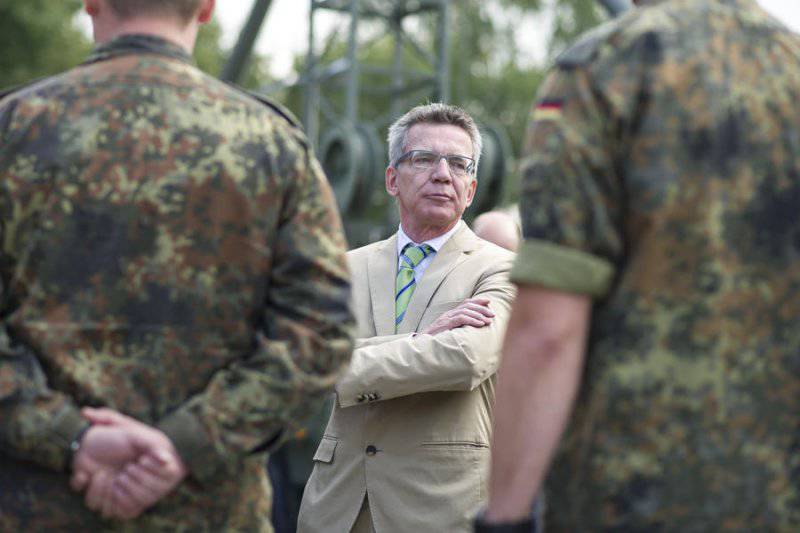 Such a measure, in his opinion, will make the army better in all respects, the portal The Local. In the country, at the same time, the legislation allows women to serve in any troops, including special forces.


“In the whole country, 200 people have been awarded the title of generals, only 1 of them is a woman. And then she works in the provision of medical services. I want the female generals to become more in all divisions, ”said German Defense Minister Thomas de Maiziere. “Women will make the armed forces better in every way. We hope that the central issue of combining family and service will thus be removed, ”emphasizes de Mezieres.

At the moment, in the German army 9% of military personnel are women. De Maiziere is going to attract ten thousand more women to increase this number to 15%, or to 28 thousand. Total soldiers in Germany in this scenario will be 185 thousands of people.
According to the Minister of Defense, today there are no divisions where the road is closed to women. The most courageous, if desired, can go to the special forces. Women are allowed to serve in the German army since 2001.

In the meantime, the UK Department of Defense paid women recruits of the Royal Air Force compensation for injuring themselves by marching on a par with men. Three women received £ 100 for thousands - this amount is an order of magnitude greater than the amount of compensation paid to soldiers who were seriously injured in Afghanistan.

During training at the Royal Air Force base in Buckinghamshire, women had to march in step with men, taking steps in 76 cm long. According to the victims, aligning with taller men led to serious injuries to the spine and hip joints. After five years of litigation, during which the UK Ministry of Defense repeatedly accused the plaintiffs of exaggerating their suffering, women of 17, 22 and 23 years received compensation for 9 years of lost wages and pension allowances.

"This case is absolutely ridiculous - it is happening in a country of absurdity," says former British Secretary of Defense Gerald Howard.

Ctrl Enter
Noticed oshЫbku Highlight text and press. Ctrl + Enter
We are
ZRK C-200 rust in the woods near Moscow
58 comments
Information
Dear reader, to leave comments on the publication, you must to register.