US advocates peace and military planning in the Arctic

November 27 2013
39
The United States has recently defended its Arctic interests according to a distorted Latin dictum: “If you want peace, prepare a parabell”. The US Secretary of Defense talks about peaceful navigation in the Arctic Ocean and the freedom of navigation, and immediately declares the need for military planning in the region and the strengthening of military ties with local states. And earlier, six months ago, President Barack Obama signed the “US Strategy for the Arctic”, which noted the need to take care of the environment and preserve the region as a conflict-free zone. 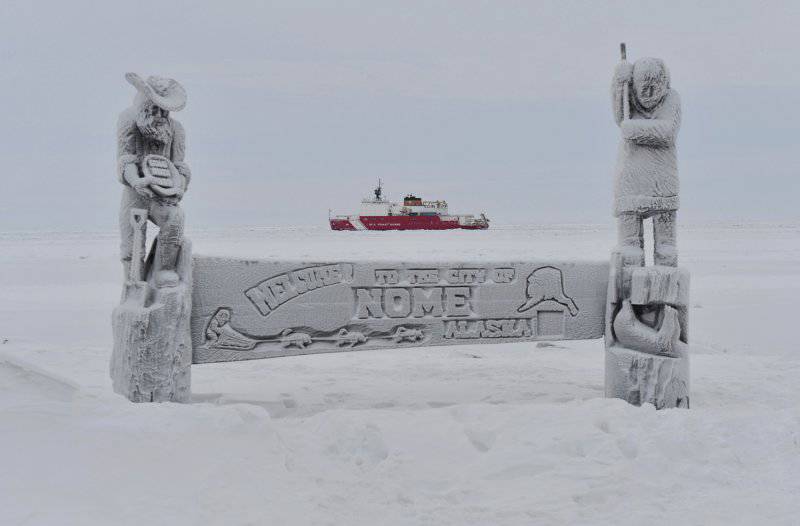 The other day in the Russian media has passed news that America is going to defend the freedom of navigation in the Arctic. The head of the Pentagon, Chuck Hagel, said this: "In the Arctic Ocean, navigation should be as peaceful as in other oceans."

What worried the main American military? Perhaps advisers whispered to Hagel that the Russians had planned an invasion of the American lands through the Arctic Ocean, simultaneously wishing to seize Canada?

It turns out that Mr. Hagel was inspired not by aggressive Russians, but by topical environmental issues. The Secretary of Defense believes that it is time for the United States to make adjustments to "military planning," because ice is melting.

Hagel is also concerned with a certain northern commercial activity. Apparently, once some states are joking there, then America is necessary. And who in the USA everywhere first puts his nose into “activity”? That's right, the military. Therefore, as the peace-loving Vietnamese veteran Hagel said, the Pentagon "will continuously make assessments of its needs in the Arctic as commercial activity grows in the region."

And so that the Kremlin did not think that some hidden threat was addressed to it, the Minister of Defense explained: “Washington will strengthen military ties with the Arctic countries. This includes Russia, with which the United States and Canada have common interests in the region and are seeking to create opportunities for constructive cooperation between the military. ”

The Pentagon took the Arctic because the melting of the ice opens up new sea routes, and Russia is already there. And then there is oil and gas. And, if you think about it, Russia is the main strategic player in the region. And the United States can not tolerate this. Hence, Hagel’s statements, and Obama’s “Strategy”. It is clear that they are talking about energy, ecology, security, freedom of navigation and other pleasant things to the international community. The Russian threat is from some Romney’s rhetoric, but not Obama and his appointee Hagel.

Before the three-day November security conference in Canada, Hagel told the Associated Press reporters about climate change, energy, security in the Arctic, and the emergence of polar maritime routes that provide new opportunities. And these very possibilities were cleverly linked not with America, but with all countries of the world. “This opens up many new opportunities for different countries, for the whole world,” said Mr. Hagel on his way to Halifax.

Of course, where possible, there are threats. “But at the same time, this brings with it new challenges,” said the head of the Pentagon. “Therefore, the United States should take a very active part in this group.”

All this is trite. The United States simply does not want to miss the tasty northern piece that Russians, Canadians, Norwegians share, and even the Chinese lately, whose participation in the division of the cake looks a bit doubtful. But the Chinese are very eager to replace the decrepit hegemon on the planet.

The current geopolitical players in the Arctic are attracted by not caring for local mammals and not upholding an undefined “security”. The interests of all those who rotate in the Arctic are purely economic. Industrialists and governments are in a hurry to divide those thirty percent (almost a third!) Of the world's undiscovered gas reserves that may be in the region and thirteen percent of the oil reserves (estimates). When the ice begins to melt - and it happens in years through 15-20 - access to these natural treasures will be facilitated. According to some expert data, in 2030, all the ice in the Arctic will disappear. Tour operators are already thinking about new northern routes (no joke).

The US military simply can not participate in the carving of such a pie. Under the guise of oceanography, high ranks have already made the relevant statements.

Team leader fleet The US on climate change, Rear Admiral and Oceanographer Jonathan White told the Associated Press that the military should already be thinking about strategic Arctic doctrine, military equipment, aircraft, military training, and more.

The ice has not yet melted and tourists are still not sunbathing on the beaches of the Arctic Ocean, but as they say, prepare a sleigh in the summer, and a cart in the winter.

In addition, Admiral White, if you read different sources, generally believes that many areas in the Arctic will be freed from ice by the 2020 year.

Finally, the same White said that the US Navy specialists are working to create technologies to strengthen the hulls of ships, so that they can withstand the pressure of ice.

And this means that the Americans want to be present in the region even before the ice melts there completely. They want to be there if not today, then tomorrow.

According to White, the issues of expanding the infrastructure of naval bases in the Arctic are also being considered in Washington. "We need to start searching for effective solutions that will allow the creation of the Arctic Navy in less than ten years," the American admiral explained.

It should be noted that Russia is well aware of the Arctic concern of America. And make the appropriate conclusions.

Even before his third term in office, Vladimir Putin, while in the post of prime minister, stated the need to build up the submarine fleet in the Arctic.

And just recently, last month, Russian Defense Minister Sergei Shoigu spoke on the subject of the return of naval ships to the Arctic. It is also known that the Ministry of Defense is building a Temp airfield on the New Siberian Islands.

The other day, the position of Russia was also explained by the Secretary of the Security Council of the Russian Federation, Nikolai Patrushev. According to him, the government is carrying out "consistent work to strengthen the groupings of troops to protect the national interests of Russia in the Arctic."

From all this we can conclude that in the region there is a struggle for resources and trade routes, which translates into a real informational battle in the geopolitical field. No, the new “cold war” still does not smell, although we are talking about the northern territories. However, the closer the world comes to the melting of the ice, the hotter this prelude will become to the “cold war”.

And the recent Greenpeace action is a confirmation of this. Experts did not expect that the UN Tribunal will take the side of the crew of the Arctic Sunrise and the Netherlands, who filed a lawsuit. However, on November 22 it became known that the UN tribunal ordered the Greenpeace members to release.

True, Russia may not respond to the decision of this court (the UN International Tribunal for the Law of the Sea in Hamburg). In 1997, Russia ratified the UN Convention on the Law of the Sea, but with reservations. Moscow has not adopted dispute settlement procedures on the exercise of sovereign rights and jurisdiction, which lead to binding decisions for the parties. Therefore, a fresh decision of the tribunal for Russia is not a decree. After all, the crew of “Arctic Sunrise” is suspected of violating Russian legislation on the exclusive economic zone and the continental shelf. Recently, Vladimir Putin said that the priority for the actions of the Russian authorities should be the national legislation of the Russian Federation. Therefore, our Ministry of Foreign Affairs got off with a formal report, in which it is noted that Moscow “will certainly study the decision of the International Tribunal for the Law of the Sea and formulate its attitude towards it”.

Of course, the Greenpeace case will not be the only one in the clash of international interests in the Arctic. If the Americans are seriously concerned about freedom of navigation, security issues and commercial activity in the region, then this means that the world gendarme plans to stake out his presence, including the military, in the Arctic Ocean.


Observed and commented on Oleg Chuvakin
- especially for topwar.ru
Ctrl Enter
Noticed oshЫbku Highlight text and press. Ctrl + Enter
We are
Results of the week. “Now Humpback! I said: Hunchback! ”Chuck Hagel: “There is no glory in war, there is only suffering ...”
39 comments
Information
Dear reader, to leave comments on the publication, you must to register.