Yemen and American drones: “for” and “against” 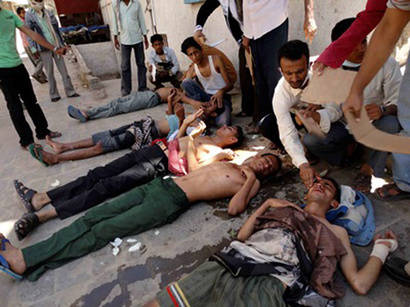 The topic of the use of UAVs in Yemen was raised by the world media back in August 2013, but in the light of the November report of human rights activists, it acquired a special urgency. On the one hand, the country's government is asking Washington for drones to fight the al-Qaeda network, on the other, it turned out that the attacks from the UAV killed 200 to 700 citizens (exact data cannot be obtained) and that against drone attacks, o which America does not warn Yemen, acts in its entirety the government, excluding the president.


In late July - early August, American "drones" who were hunting al-Qaeda members struck a number of objects in Yemen. The attacks were associated with the growing terrorist threat in the regions of the Middle East and Africa and the existence of some unmasked conspiracy directed against the West by Al-Qaida leader A. al-Zawahiri. Due to the terrorist threat, a number of US embassies were closed for quite a long time, and the staff of the diplomatic missions were evacuated.

Two weeks later, the press got information that Yemen’s President Abd al-Rahman Mansur al-Hadi asked the United States to provide drones for help in the fight against al-Qaida in the Arabian Peninsula ”(AQAP). According to the president, forty Islamist militants were successfully destroyed by blows from a UAV in the country.

The Pentagon responded with a promise to provide Yemen with reconnaissance drones worth 75 million dollars and 48 mobile stations to monitor the vehicles.

Meanwhile, Washington continued its own attacks of Islamist nests in Yemen.

In November, there were reports of the destruction of first three extremists in the east of the country, and then 12 of al-Qaida militants in the province of Abyan in the south. As before, the Americans did not warn the government of Yemen about the attacks.

Famous Yemeni human rights activist Baraa Shiban spoke against the use of UAVs in the country by the Americans. He arrived in Washington and at a special briefing told about the death of more than seven hundred people as a result of missile strikes by American UAVs.

Comrade Shiban clarified that his data are approximate. After all, the Pentagon does not provide any detailed reports. According to the Yemeni government, it was not 700 that perished, but only 200 people. As for the US administration, it considers the information of Baraa Shiban “inaccurate”.

Human rights activists regularly complain to the authorities of Yemen, but the latter get off with blank replies and do nothing. According to Shiban, the United States must warn about strikes.

After Shiban’s speech, Yemen’s human rights defenders and ordinary citizens, whose relatives and friends died from attacks, including those who openly spoke out against Al-Qaida and Islamist extremism, continued the protests in the United States. 16 November they gathered at the White House, bringing with them models of UAVs and gravestones. Barack Obama could not remain silent and promised to make the attacks of "drones" more transparent.

She told that the father of three children, a teacher of the local school, Ali Nasser, was killed during the impact of the American UAV. Along with him, a cousin, 20-year-old student Salim, was killed: he picked up Ali on a borrowed Toyota. History is this: Ali and Salim picked up two strangers who turned out to be al-Qaeda’s alleged militants. According to eyewitnesses, there was a buzz in the sky, and rockets were hit on the car. Relatives identified Salim by a piece of trousers; his body just shattered into pieces. Salim Um Salim Al-Kawli's mother says:

“I could not believe the day that my son was killed by the impact of an American drone. Why? Tell me! May Allah deprive them of their souls, how they have deprived the life of our son. He was the only breadwinner in the family. Now we can only mourn him. "

The Yemeni Interior Ministry confirmed: the cousins ​​had no relation to the terrorists.

However, the White House did not admit that these people were killed by the drone, although relatives are sure that the cause of death of their loved ones was the Hellfire missile launched by the UAV.

“The drone strikes do not reduce the number of al-Qaeda.” On the contrary, it is likely that they helped strengthen the organization. In the future, when a unit develops into a fairly large and powerful group, it will be able to inflict serious damage. ”

The correspondent of "RT" cites the opinion of the president of the organization "Veterans For Peace" Leah Bolger:

“I believe that launching rockets that kill peaceful families from nowhere, from the sky is a kind of terrorism. I do not know how to identify a terrorist when there is no evidence against him. That is what the Geneva Convention is about. ”

“These raids are a violation of many of its provisions, a violation of the sovereignty of foreign states, on which we strike. Drones attacks are not only ineffective, they are also dangerous because with every innocent victim we undoubtedly make new enemies. ”

It is unlikely that human rights activists will achieve anything in the United States, especially if we recall that the President of Yemen against the attacks of the “drones” do not particularly object and even asks to provide the country with these same “drones”. To the American errors committed at a distance, the Yemeni errors will be added. And every mistake - someone's death, which for the military is nothing more than statistics (and very dark).

The US military-industrial complex will continue to promote the UAV.

The other day on "InoSMI" Ilya Plekhanov’s report “Filling the Heavens” was published, where the author spoke about the first international summit “UAVs in the world” at Georgetown University, USA. The summit was organized by the University Lawyers Guild, the Institute for Political Studies, the women's advocacy and anti-war organization Code Pink, and The Nation magazine. The meeting was also attended by delegations from Yemen and Pakistan.

The attacks with the UAV, as it turned out, are inflicted in the world only three states: the United States, Britain, Israel.

Meanwhile, according to Peter Singer, director of the 21st Century Security and Intelligence Center from the Brookings Institution, countries already have 87 UAVs. The expert claims that 26 of them either bought or are close to creating “drones” like the MQ-1 “Predator” capable of delivering missile strikes.

In addition to Predator, Israeli IAI Heron is popular in the world market. According to the Stockholm International Peace Research Institute, from 2001 to 2011. 41% of all UAVs in international trade were supplied by Israel. Israel sells UAVs to 24 countries, including the United States. "Frost & Sullivan" published a report on Israeli UAVs, from which it became clear that from 2005 to 2012. Israel sold $ 49 billion to 4,6 foreign buyers of drones, while the United States sold only $ 2 billion to $ 3 billion.

The United States is not going to turn off dronoprograms. On the contrary, experts believe that the volume of the UAV market will go up.

Teal Group Corp. recently released its tenth global UAV market report. By 2023, the market volume may increase from the current 5,2 billion to 11,6 billion, while R & D investment will rise from 1,9 to 4 billion, and the US will occupy the 65% of the R & D market and 51% of sales.

I. Plekhanov quotes the words of John Henry Hoeven, senator from North Dakota, who were spoken by the December 2012 of the year at the Senate meeting on the growing role of the UAV in the world:

“Our military uses UAVs all over the world. We are leading the way in this technology. ... We must continue to be the world leader in aviation technology is important to national security and it is important to job creation. ... We are obliged to develop technology and systems in order to use UAVs in the airspace of our country simultaneously with commercial aviation and general aviation. This is vital to maintain our leadership. ”

Against the background of recent statements by Obama and John Kerry about American "exclusivity", we add, the words of Huven become ominous.

It must be remembered that not only in connection with the economic crisis, but also in connection with the inevitable increase in the technological component in the defense strategy of the XNUMXst century, the United States will increase funds that kill at a distance, which, in turn, will be actively promoted by insatiable owners Military-industrial complex successfully lobbying capitalist interests in Congress. One John McCain, the main proponent of aggression against Syria, whose campaigns are sponsored by American weapons Barons, what is it! ..

Therefore, as before, Washington will otbryvatsya from human rights defenders, making promises, making statements and assuring the international community that the information on civilian casualties in Pakistan or Yemen is inaccurate.


Observed and commented on Oleg Chuvakin
- especially for topwar.ru
Ctrl Enter
Noticed oshЫbku Highlight text and press. Ctrl + Enter
We are
From Ukraine to Syria. Russian drones Orlan-10 and Aileron-3CB in the Syrian skyGeopolitical mosaic: Ayman al-Zawahiri spoke at a conference in Atlanta, and Hugo Chavez met with Che Guevara and Simon Bolivar
24 comments
Information
Dear reader, to leave comments on the publication, you must to register.