Our Marines in Chechnya 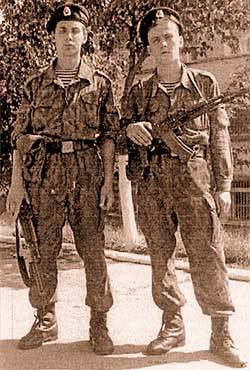 We continue to publish materials about our fellow countrymen participating in the first Chechen campaign. Today, our story about the marine, who was fortunate enough to return home alive and unharmed. For the Chechen war, he received a soldier’s medal “For Courage”. And that's all. There are only memories that are enough for the whole book. Just write it from our countryman Sergei Ovechkin, there is neither strength nor special desire ...


When Serge came to serve in the 55th division of the Pacific Marine Corps fleetthen very happy. He, like most peers, believed: being a marine is prestigious. Got a military specialty - driver mechanic tank...

But suddenly the news came about the direction to Chechnya. Right on the landfill reported this company. At first, our countryman was very surprised: the marines are not intended for land war! Then he presented the possible consequences of a military trip, and he felt uneasy. In part, there was confusion, close to panic. From all over the Pacific Fleet they drove the personnel there.

At several o'clock the young men who had previously served on warships and submarines in parts of the sea became marines aviation. Many of them held a machine gun in their hands only while taking the oath ... An acute shortage of personnel led to the fact that after the formation of the 165th "Chechen" regiment, other parts of the fleet practically lost their combat effectiveness.

A new, 1995, year, met without much joy. They drank juice, ate oranges, remembered the house and loved ones. The guys understood that for some this New Year's meeting would be the last. They passed a commission - doctors meticulously examined candidates for war.

Some tried to kill, but these were a minority. “I must say that no one was forcibly driven into Chechnya. During a special interview, anyone could refuse. There were five percent. Among the refusers was a large group of officers. ”

Sergey was transferred to another company, appointed assistant grenade launcher. Now he was required to carry a bag with three shots to the RPG-7. His colleague also had almost no idea of ​​what was entrusted to him. weapons. In early January, when fierce street battles were fought in Grozny, the marines left for the training ground. For 10 days of stay there they had to fill in all the gaps in preparation. From machine guns and machine guns it was possible to shoot as much as you want - they did not spare cartridges. In addition to automatic weapons, Serge trained in shooting from RPGs. He liked the grenade launcher. So gradually, former sailors acquired the necessary skills, but they were still far from real professionalism.

The first military clashes in Chechnya were remembered by Sergey by the fact that the shootings took place at distances of at least 400 meters. That is, neither they nor the Chechens could really see each other. At the same time crazy shooting was carried out. Very rescued tanks. They attached T-80 from the Kantemirovskaya division to their company. The tank guys knew their business well. Once, the Chechens opened fire on the house where the sailors were housed from a two-story structure standing opposite. We tried to cover the militants with a grenade launcher, but the grenades ricocheted and went to the side. The point in this exchange of fire put the tank, covered by the crew in the garage at home. One shot - and dvuhetazhka turned into ruins. The bricks scattered from the explosion were red-hot. 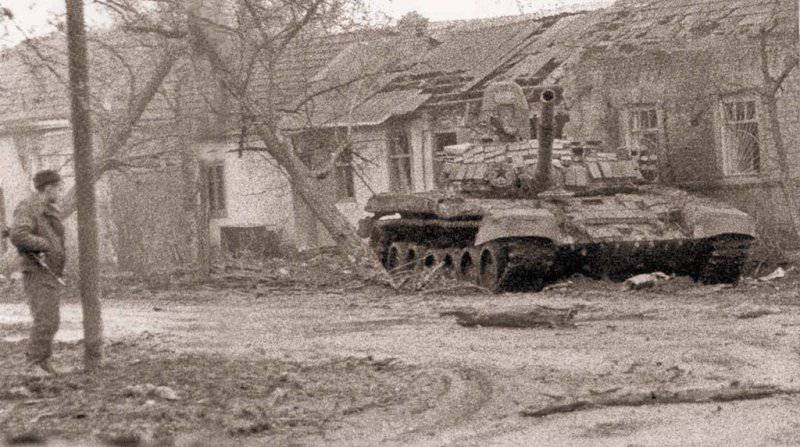 T-72B1 in the suburb of Grozny

Serega does not consider entering tanks in Grozny a mistake. If not for the T-72 and the T-80, the feds would have had a hard time. The tanks covered the infantry with their armor, supported it with fire. There were many cases when, only thanks to the support of tankers, the outcome of the battle was decided in favor of the Russian troops.

Sergei had to be in the assault groups. The case is very dangerous. During the capture of one of the five-story building, they came across a group of Chechens. The clash was sudden for both ours and the militants. The battle lasted a few minutes, it is almost impossible to restore its chronology - but ours lost three soldiers. The grenade throwers of their unit beat not only at the snipers, machine-gun points - they had to open fire on Dudayev’s armored vehicles. They shot down a tank and two armored personnel carriers.

As Sergey confesses, you lose the sense of time in a war. Sometimes it seems that you have been here for ages. And gradually you get used to the idea that you can be killed. You don’t come to this right away - in about a month. And when the sounds of artillery preparation are not audible over the positions, it becomes disturbing at heart.

And in general, war has little in common with film fighters, with cinematic romance. In fact, this is a difficult and routine exercise, devoid of any meaning. Because everything was bought and predetermined by some greedy officials sitting in Moscow offices and earning money from the blood of Russian soldiers.

Ctrl Enter
Noticed oshЫbku Highlight text and press. Ctrl + Enter
We are
Marine Day. 310 years to the Russian "sea soldiers"Fight, student! Memories of the first Chechen
30 comments
Information
Dear reader, to leave comments on the publication, you must to register.