November 26 2013
19
The SPP-1 pistol complex, designed at the end of 1960, is personal weapons fighters detachment combat swimmers. It is designed to combat the underwater saboteurs of the enemy, as well as to protect swimmers from marine predators. In the latter case, this gun can also be used by civilians. The fire from the underwater pistol is conducted only by single shots. The complex for underwater shooting of SPP-1 was put into service in March 1971.


Work on the creation of the complex was started on the initiative proposal received from one of the leading designers of TsNIITOCHMASH in the 1968 year. The designer’s initiative was immediately supported by representatives of the Directorate of the anti-sabotage services of the USSR Navy, who financed the development. When creating a complex, the use of 2 types of ammunition was tested: active-reactive and active. The studies were conducted with the involvement of specialists from the TsAGI branch. As a result, a pistol complex equipped with active ammunition was adopted, which, despite the fact that it was inferior to active-reactive ammunition in combat characteristics, was distinguished by its simplicity of design. This, in turn, made it possible to accelerate the process of arming Soviet combat swimmers with new weapons.

The first research into the development of underwater pistol weapons in our country began in 1966. The originality and complexity of the task lay in the fact that Soviet and foreign counterparts of underwater small arms simply did not exist at that time. Almost completely absent scientific and theoretical development of ammunition and similar weapons. The main problem that confronted the designers was the impossibility of developing a full-fledged underwater firearms weapon. This was due to the fact that shooting under water is accompanied by 2 negative factors: filling the bore with water and high density of water, which is 800 times denser than air. 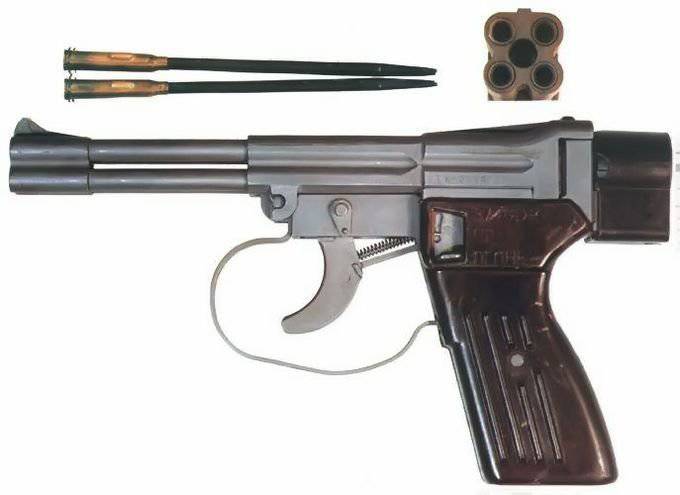 If the high density of water led to a decrease in the stability of the bullet on the trajectory and a decrease in firing range, then the filling of the barrel led to a manifold increase in the pressure of the powder gases in the barrel and chamber that act on various moving parts of the weapon, which could lead not only to the destruction of small arms of traditional schemes, but also the doom of the arrow.

Already at the stage of the first tests, the designers determined that the bullets of ordinary structures, when used under water, have a very limited range of a shot, since they begin to lose their effectiveness already at the smallest distances (up to the 1 meter). It was found that they are completely unsuitable for use in underwater small arms. Subsequently, the designers O.P. Kravchenko and PF Sazonov chose a constructive scheme of the underwater cartridge, which was based on the principle of throwing an elongated bullet. At first they succeeded with the help of the theory, and then, on the basis of a complex of research and developmental works, as well as with practical application, they developed a special ammunition for firing with special non-rotating elongated bullets possessing hydrodynamic stabilization, which was provided by movement of bullets under water.

The pistol complex created at TsNIITOCHASH consisted of an SPP-1 non-automatic four-barreled pistol (then SPP-1М), 4,5-mm cartridges for it, as well as 3-x sealed canisters for 3-holders, holsters made of artificial leather, accessories that were designed for equipment clips cartridges, waist belt, oiler and ramrod. 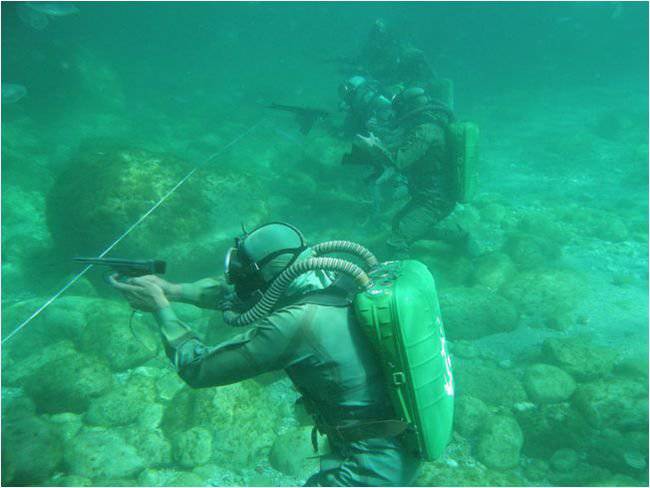 Structurally, the gun was made in the form of non-self-loading model of the traditional form with the ability to conduct a single lamp. The trunk of the SPP-1 was made in the form of a single unit, which was folded down (on the principle of the action of a hunting rifle). A block of 4-x trunks was attached to the axles of the frame. In the combat position, it was fixed with a special latch. This scheme provided the use of long-length cartridges - 145 mm. The pistol had a double-action firing mechanism, which was located behind a block of 4 barrels and provided consistent shots from each of them. The trigger of the pistol worked from a single trigger. At the time of each shot, the drummer made a turn on 90 degrees on a special rotating base and, under the influence of the trigger, smashed the primer cap.

SPP-1 was equipped with a flag fuse, which was located on the frame behind and to the left of the trigger guard and had 3 positions: “fuse”, “fire”, “recharge”. Moving the fuse to the highest position unlocked the barrel unit to produce reloading weapons. It could also be used with gloves. Loading of SPP-1 was carried out by a clip in which 4 of the cartridge was rigidly fixed. The clip accelerated the process of reloading weapons due to the simultaneous insertion of 4 cartridges into the barrels. After the shots, the cartridge cases were removed simultaneously with the clip. For aiming a swimmer could use a fly and a constant sight. The pistol grip was hollow and made of plastic.

All the main parts of the weapon were made of stainless heat-treated steel. Since, in comparison with conventional steels, stainless steels have an increased friction coefficient, to increase the efficiency of the mechanism, all friction parts were coated with a specially developed composition, which included di-molybdenum. This coating served as a solid and effective lubricant. Cylindrical coiled springs were made of ordinary carbon spring steel and were protected from corrosion by high-strength hot-drying varnish. The cheeks, which played the role of a power element, were made of aluminum alloy, they were protected from corrosion by anodizing. 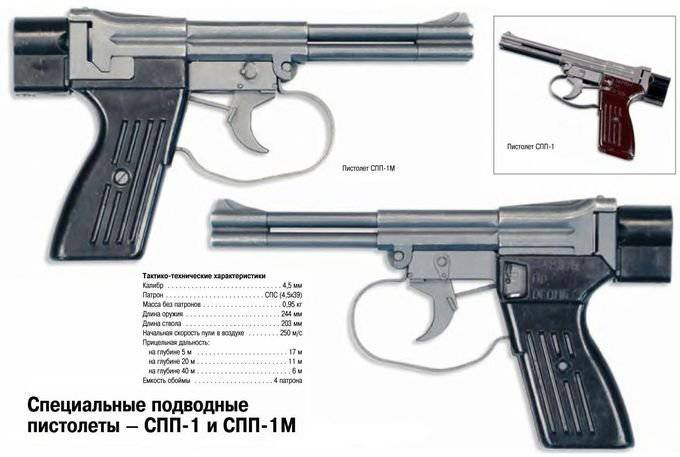 The effective range of firing under water using the standard ATP cartridge dropped with increasing depth of immersion, but in all cases it was above the line of sight at a given depth. The use of this bullet ensured the defeat of the enemy, dressed in a wetsuit, or attacking a sea predator swimmer.

In 1979, the gun was modernized and received the designation SPP-1M. He was distinguished by the presence of a spring, which facilitated the descent, and the increased trigger guard allowed the use of special warmed three-toed mittens by combat swimmers. The gun was transported in a special belt holster made of artificial leather, 12 cartridges in the loaded holders were placed in special metal canisters. The launch of the 4,5-mm pistol SPP-1M, as well as the 5,6-mm submachine gun for underwater firing of the APS, was deployed at the Tula Arms Factory. It is worth noting that the combat swimmers’s weapons complex has no direct analogues.

Ctrl Enter
Noticed oshЫbku Highlight text and press. Ctrl + Enter
We are
No noise and dust. Part-2Firearms of combat swimmers
19 comments
Information
Dear reader, to leave comments on the publication, you must to register.