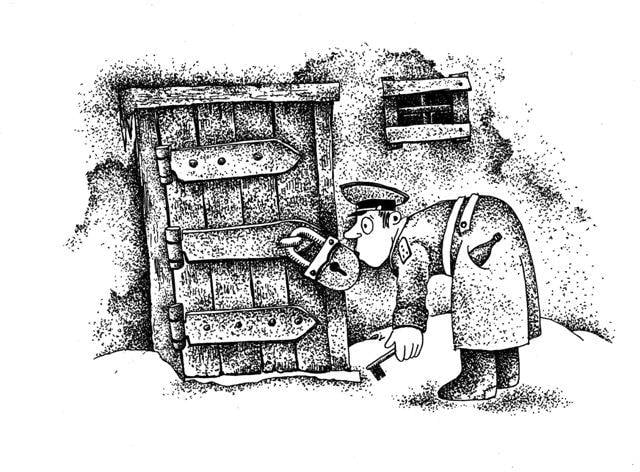 Another outstanding Far East was our Yurochka Lasers. (He was already mentioned in previous chapters). After a number of his “exploits”, Yurochka was removed from political work (and this was considered, in those years, a serious punishment) and put as assistant to the operational duty battalion. Yurochka successfully mastered all the wisdom of combat duty in the position of operational duty officer. First, in the battalion, then "grown" and to the regiment.
After the replacement, he left for Chukotka, Cape Schmidt, where the radio engineering regiment then stood, in which Yurochka continued to serve as an operational duty officer.

The service is not bad. Three days later, and there is no subordinate personnel, and this is a HUGE plus in military life. The creeping collapse of the army began, which we were given for its "reform".

The regiment of Yurochka was reformed into a battalion in which he continued his service. The post of operational duty officer had a captain category. So Yurochka served as a captain, valiantly carrying combat duty and dreaming of a major rank.

Someone has advised him that there is an order of the Minister of Defense permitting the assignment of the rank to the operational duty officer one step higher than their official category, provided that they perform excellently and doubled over the term of receiving the next rank.

The combat duty of the Lasers was excellent, and he had gone through his major rank three times already. He wrote a report on this account and sent it, as it should be up “on command”. A month has passed, another, a third - neither the rumor, nor the spirit of the fate of the report ...

Half a year later, in the middle of the night, Yurochka was “pulled” to the phone: “Moscow,“ Comet ”is ringing !!! The telephonist told him. It must be said that the “Muscovites”, forgetting about the 9-hour time difference, often called the Far Easterners, when there was an evening in the capital (18.00 and the height of the working day), and in Chukotka - 3 nights.

Nevertheless, the call from Moscow, to God’s forgotten battalion at Cape Schmidt, was an extraordinary event, and Yurochka instantly awoke.
A colonel slouched his name slurredly and sullenly asked: “Your report has arrived. What do you want something ?! "

Yurochka, perplexed by such a dense stupidity, told the sullen colonel that he wanted to fulfill the requirements of the relevant order of the Minister of Defense.

"Look, wise guy, what turned out!" - answered the colonel sternly and hung up. There was no question of calling back and finding out something. “From below” some captains to “Komet” were not connected.

So Lazers continued to carry combat duty in the captain's rank for another six months.

Here the "reforming" of the army was still intensified and their battalion was simply disbanded. It was necessary for Yurochka from the preferential region (which Cape Schmidt was) to move to Vladivostok to an equivalent position.

Once he was offered to “remember youth” and move to the post of deputy commander of an anti-aircraft missile division for educational work. This position was “Major” and Yurochka agreed to return to the thorny business of educating his beloved personnel, for the sake of obtaining the Major’s rank (I’LL worth mentioning).

However, "the fairy tale is easily affected ...". It turned out that Yurochka’s personal file remained in the abandoned battalion headquarters, as did the personal files of the other officers. Of course, they were supposed to be sent to a new duty station, but the personnel officer quit and drove off to the “mainland” without bothering to do so. "Pull out" a personal file was no longer possible. Nobody answered the desperate letters to the northern depressive settlement. And without a personal business - no presentation on the title can be done.

While doing a duplicate, until completed all the formalities, it took another six months. Here the long-awaited happiness came: by the order of the commander of the Far Eastern Military District, Captain Lazerov was given the military rank of "Major" !!!

Yurochka didn’t have time to properly mark this event, as the happiness doubled: some kind people sent a genuine copy of Captain Lazerov’s personal file to Cape Schmidt.
In which was found an extract from the order of the Commander-in-Chief of the Air Defense Forces on conferring the rank of "Major" to Captain Lazerov. Approximately 9 months earlier than it was assigned to Yurochka by the Commander of the Far East Military District.
So our Yurochka Lasers TWICE MAJOR became !!!

Yurochka, along with his family, fully sipped all the "charms" of life in the Far North and Far East, but retained a sense of humor and optimism.
Among the many stories about various funny incidents in his rich biography, a special place is occupied by the description of the heroic service of Captain Frolov.

He was an amazing military leader who had, among those who knew him, the honorary title “the coolest captain in the Armed Forces”.
EACH year of his service was marked by a memorable incident, which posed a great danger either to his life or to his health.
It all started with the fact that Frolov was appointed commander of a separate radar company.

- On the second (!!!) day of his arrival in the company, the barracks burned in her. People all had time to jump into the windows (the benefit of the barracks in the air defense companies was one-storeyed, barracks-type), but weapon - burned everything.

Captain Frolov fought with fire like a real firefighter and came out of the flame with burnt ears, in an overcoat smoldering on his back, the coattails of which were burned down completely, like his cap with earflaps (it was in winter). The situation was somehow “settled”, the benefit of human victims and injuries were not.

- The next year, Frolov went on vacation, "got drunk" on the train and managed to cut off (!) His finger with the help of a regular compartment door.

- The next year, the life of the heroic captain was again in considerable danger. His company carried combat duty in readiness No. XXUMX (the company was in the depths of the country and the requirements for its combat readiness were minimal). Frolov took over duty on duty shift chief (then there was such a requirement that even the commander of the company 3-1 once a month was in combat duty at the head of the combat crew).

It was supposed to do it at the company’s Control Point, of course, but ... it was summer, the heat, the radar stations were turned off (readiness number XXUMX, after all). Frolov gave the order to stretch the telephone line to the bank of the pond, located near the company, and began to catch minnows there, without departing from the communication line. At the same time, from time to time he applied to the bottle, but so successfully that he had a strong okosel.

At the next casting of the fishing pole, he managed to get lost in the fishing line and collapse from the cliff into the pond, where he floundered, tangling in the fishing line more and more. The case went to death. This could have become a noble "fucker": the commander of a radar company drowned while he was on combat duty in the middle of Russian forests! The position was saved by the company’s foreman, an old ensign. Going to dinner, he decided to look at the pond and saw his sinking commander, whom he pulled out of the abysses.

After that, he was removed from the company and appointed head of the repair shop.

There was another famous case with the "coolest captain."

In winter, he decided for some reason to visit the premises of his repair shop at night (most likely he wanted to steal something out of it under the cover of night darkness).

And the room for the night, of course, was locked and sealed and in order to get there at night, it was necessary to perform quite a few formalities, which Frolov did not want to do. Moreover, he had a duplicate key and a seal. However, there was frost and a frozen castle did not want to open. Frolov decided to try to warm him with his breath, breathed, breathed, and touched his lip to the icy metal and immediately stuck to the castle with his lip. It was impossible to break away (the pain was terrible) and Frolov froze, bent at the back and stuck to the castle with his lip.

“Only one thing remained: to disappear!”, The classics wrote in such cases.

(I must say that the toilets in the air defense units were usually field-type and were located 50 meters from the barracks, as required by the Internal Service Charter. The fighters, as a rule, were too lazy to run to the toilet at night, and celebrated little need right from the porch in the nearest snowdrift).
So, only Ukhov, who was shouting, was prepared for this simple action, when suddenly he heard a terrible afterlife voice coming from the darkness of the night: “Uuuhohoov !!! Oooooooh !!!!

The shocked fighter instantly lost both his drowsiness and the desire to "cast off" and turned around to return to his native barracks, away from this terrible howl, but he immediately repeated with a tenfold force: "Uuuhohoov !!! Uuuuhooov, Yo * your mother !!! ".

Pale as death Ukhov rushed headlong into the barracks, where he told the sleepy attendant about the incredible night howling. The duty officer, seeing the state of Ukhov, whose hair stood on end, imbued with confidence in his story, and together they went out together on the porch, where they again heard the heartbreaking call from the repair shop.

The soldiers, encouraging each other, went to the source of the sound, and found the unfortunate Frolov, who had frozen to the castle, facing the barracks and could, therefore, see and call his savior.

With the help of warm water, the soldiers freed the unfortunate from ice captivity.

Another, no less colorful officer, met by Lazerov on the thorny Far Eastern route, was the "super-intelligent eternal senior lieutenant" Kozlov.

In the battalion at Cape Schmidt, Yurochka drew attention to an unusual senior lieutenant. In appearance, he was 50 years old, no less. Professor's glasses and a worn leather briefcase, with which he did not part, gave the elderly elder a special charm and a very unusual, for the harsh northern latitudes, entourage.

Kozlov held a modest position as a P-14 radar technician, located "on the outskirts" of the battalion's combat position. In the morning and in the evening, officers and ensigns were taken to the service in the insulated truck KUNG.

Over time, the officers were struck by the fact that every morning the "super-intelligent" Kozlov was driving to the service with a skinny briefcase, and was returning in the evening with him, but he was packed tightly and unknown how.

The people wondered what Kozlov could carry every day from the service ?! It’s not the capacitors with the lamps that he steals from the zip.

In the end - all these conversations reached the battalion commander. He was a resolute man, and one evening Kozlov said: “Well, open your professorial portfolio, let's see what you bring home from the service!”

Kozlov, after some brief wrangling, was forced to open his “professorial” portfolio, and the amazed commander saw that he was tightly stuffed with pieces of anthracite coal !!!

Families of officers heated their apartments with stoves that consumed coal. The radar also had a stove (for some of its needs). It was from there that the “super-intelligent eternal senior lieutenant” borrowed better pieces of anthracite. "Home for the family" tried.

Then, at the end of the Soviet era, it still seemed reprehensible ...