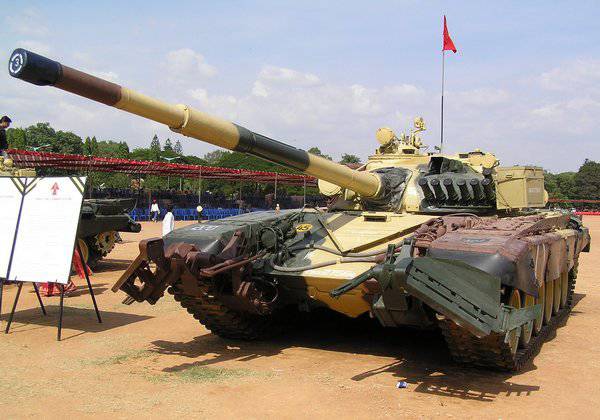 Afghanistan sent a letter asking India to the possible transfer of military equipment used by the Indians, but which is derived from their arsenal. All this in order to quickly strengthen its own security forces in connection with the withdrawal of NATO troops after 2014.

In addition, as reported by “India Tuday”, the Afghan authorities expect to receive a large number of trucks and off-road vehicles, small arms and ammunition, as well as assistance from India in providing technical maintenance and maintenance of equipment. It is also planned to create a military school, staffed by an Indian faculty.

These weapons and MTO services Afghanistan is asking for more than India’s assistance in the amount of 2 billions of dollars provided as a credit line for the rehabilitation and development of infrastructure, including the construction of dams, roads and bridges, as well as schools and hospitals.

In connection with the upcoming withdrawal of the NATO contingent, the previous request of India in the framework of military assistance was sent in mid-September this year.

The Chief of the General Staff of the Armed Forces of Afghanistan, General Sher Mohammad Karimi, stated the need for Kabul for military hardware from the Armed Forces of India, including main battle tanks, infantry fighting vehicles and artillery systems. General Karimi also appealed to the Indian side to ensure the supply of helicopters, communications equipment, other weapons and the restoration of Soviet-made weapons and equipment made up in the Afghan armed forces.

The Afghan Armed Forces Command has already submitted several lists of the required equipment to the Indian leadership since the signing of the strategic partnership agreement between the two countries in October 2011.

The Afghan Armed Forces include MBT T-55 and T-62, infantry combat vehicles BMP-1 / BMP-2, anti-aircraft artillery ZU-23-2, towed guns M-46. The same types of military hardware are in service with the Armed Forces of India or have recently been written off.

General Karimi also asked for help in providing simulators and training Air Force personnel for the maintenance and operation of the Mi-8 and Mi-17 helicopters.

However, according to Indian sources, as in previous negotiations, Indian officials reacted extremely cautiously to Karimi’s inquiries. They referred to the lack of equipment and the possible violation of the intellectual property rights of Russian manufacturers.

Although the state Department of Defense Enterprises (Ordnance Factory Board) has been licensed to produce many of these platforms for several decades, India has to coordinate the issue with Moscow for the sale of military hardware. The leadership of the Indian Defense Ministry also stated that the available reserves in case of war, which could become a source of supplies for the armed forces of Afghanistan, are currently insufficient for their own needs.

The real reason for the reluctance to transfer weapons according to the lists provided by Afghanistan, according to the sources of India Tuday in the office of the Prime Minister, is the fear that military equipment and weapons could fall into the hands of the Taliban. Therefore, India still prefers to wait.

In addition, supplying the Afghan army with weapons entails political consequences, since neighboring Pakistan, which is India’s regional rival, views Afghanistan as a zone of its special interests. Nonetheless, Afghanistan pointedly rejected Pakistan’s offer to train the Afghan military and provide a credit line.

Despite the reluctance to supply weapons, India continues to train the personnel of the Afghan armed forces. Over the past few months, more than 400 Afghan soldiers have been trained at three regimental training centers in northern India.

Ctrl Enter
Noticed oshЫbku Highlight text and press. Ctrl + Enter
We are
Attack helicopter armamentToday, the military transport aviation of the Air Force marks another anniversary of the formation of
32 comments
Information
Dear reader, to leave comments on the publication, you must to register.