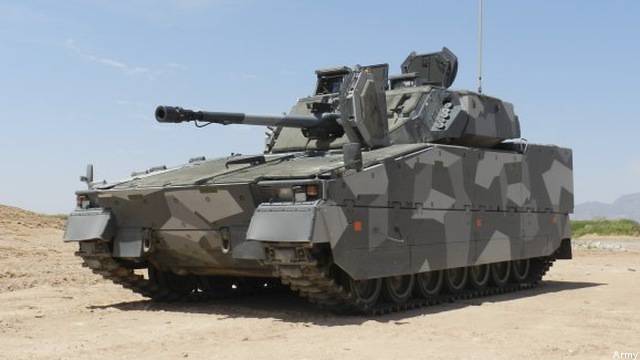 The leadership of the Canadian Department of National Defense (DNO) underestimated the complexity of the project costing 2 billion dollars to acquire a fleet of new armored vehicles, arguing that the government project not only has low risks, but also that all vehicles will be delivered next year.


The Close Combat Vehicle project is currently at least two years behind schedule and faced resistance from the military, who are worried that they will not be able to afford new armored personnel carriers. According to military, government and industrial sources, the Canadian army would like the government to cancel the project earlier this year, but this proposal was rejected.

Retired Defense Chief of Staff General Rick Hillier has since supported the cancellation of the project for acquiring the Melee Machines, or CCV, claiming that $ 2 billion could be used to help offset the cuts in the military budget.

But at a briefing in February 2010, Canadian Defense Minister Peter MacKay, and then other senior department officials, not only noted that a CCV acquisition has a low level of risk associated with its cost, time and technical issues, as well as that the first cars will arrive in Canada in the 2012 year. Fully the program will be executed in 2014 year.

The government should announce the winning company CCV soon. Government officials could not comment on anything, but later they indicated that they were continuing to work with the BOT on the CCV project.

At the briefing, McKay said that there were significant risks with two other programs being carried out with armored vehicles: upgrading the Light Armored Vehicle LAV-111 worth 1 billion dollars and purchasing a Tactical Armored Patrol Vehicle or TAPV. Senior officials said they faced "significant technical risks while achieving the necessary mobility and level of protection."

In particular, the technical risks for upgrading the LAV-111 were assessed as high. Among the problems was that the contractor, General Dynamics Land Systems Canada, would have to do an “almost complete restoration of the car and engine / transmission case”, said McKay.

But the first LAV-111 was released earlier this year, and the project is on schedule. Canadian soldiers are also currently experiencing the first TAPVs.

The draft of the melee machine was announced with great fanfare in the summer of 2009. The government should procure 108 armored personnel carriers.

The army initially claimed that the vehicles that would have to accompany it Tanks Leopard in battle were a priority for future missions. But at the beginning of this year, she began to retreat from the purchase, because she was worried that she could not afford these machines.

Recently, the Canadian press, referring to the internal documents of the government, said that the car would cost the Canadian army more than planned, and commanders fear that they will not be able to afford the maintenance of the main CCV fleet in the future.

The government commission, evaluating this project, reported that the cost of infrastructure, the implementation of information systems, the cost of the support contract and the lack of simulators create a "high risk" for the project.

One of the options under consideration is to include in the contract a clause on the possibility of termination of the contract in case of insufficient funding, if in the future the procurement budget will be cut.

Purchasing CCV has also faced many other difficulties. In August, 2010, each of the proposed machine options offered by different companies was consistently rejected, as not meeting the technical requirements. Among these machines were also some of those used in the battle conditions of Canada’s allies in Afghanistan.

At the beginning of April 2012, it was reported that the meeting for the bidders was suddenly canceled, which indirectly confirmed that the CCV project was again in trouble. True, Colonel Kelby Hamilton (Kelby Hamilton), project manager for CCV, said that around this topic "a lot of misinformation." However, officials later confirmed that the meeting was indeed canceled. A few weeks later, the government announced that the request for proposals from the bidders (RFP) for the CCV project was canceled and the tender was restarted again.

The Canadian Army is facing an 22 percent reduction in the budget and is trying to figure out what to do with this reduction. It curtails training costs, cuts down some support programs for troops, and sells some types of equipment.

In September, 2013 academician and former NDP candidate Michael Byers and researcher Stewart Webb published a report, arguing that the acquisition of CCV must be canceled, since the updated LAVs will be able to fulfill their role. They offered to find the best use of 2 billion dollars, for example, to invest them in the training of Canadian soldiers.