South Korea will create the "invisibility" 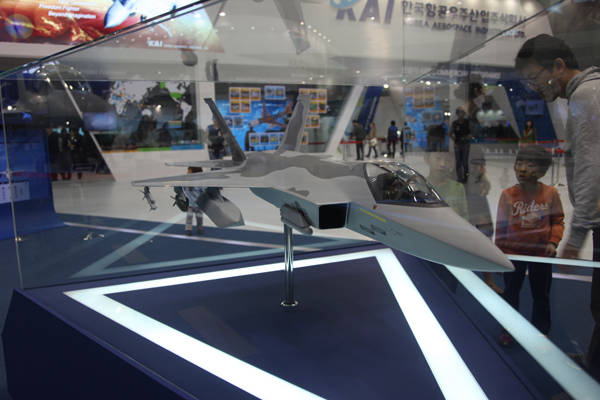 Almost simultaneously with the decision to purchase fifth-generation F-40 A fighter jets from the USA, Seoul took another important step in the development of the defense industry. Officially, the program for creating their own Korean "invisible fighter" was launched, in the future they plan to produce at least 35 of such aircraft, as well as export abroad. The car itself is rumored to be "will look similar to the F-120." True, experts point out that it will not be so easy to realize your ambitious ideas for Seoul.


Recall that at the moment only the United States, which has already adopted the F-22, which has two engines, has its own really operating fifth-generation fighter. For export, the US and its allies create F-35 of various modifications. But this machine is "weaker" F-22, has one engine. Programs to create their own “invisibles” are also being actively implemented by China and Russia, but these samples are still being tested and refined at best.

The decision to start the implementation of the next generation fighter program was taken during a recent meeting of the Joint Chiefs of Staff of the South Korean Armed Forces. Work under this program really start from the beginning of 2014 year. The project itself was called "KF-X - Porame".

South Korean generals also identified the basic requirements that will be a guide for engineers and designers. The Korean "invisible" should be better in terms of its combat characteristics than the KF-16 fighter assembled in South Korea (in fact, a little modernized F-16). It must have "significant elements of invisibility." It has already been decided how many such vehicles will be required for the South Korean Air Force - 120 units. True, Seoul has plans to export these fighters in the future, so the production will be more ambitious.

South Koreans understand that it will be extremely difficult for them to “pull” such a project. Therefore, the creation of a new machine is planned to be implemented through the creation of an international consortium, which has already managed to attract Indonesia.

But experts point to the existence of serious obstacles. First, Korea simply does not have stealth technology, which should be key to the new car.

Having decided to order the X-NUMX machines F-40 A from the American concern "Lockheed Martin", Koreans immediately began to look at this company as a possible supplier of technology. Moreover, at an earlier stage of the tender for the supply of fighter jets for the South Korean air force, Lockheed Martin, together with other competitors, declared that it is "possible to transfer know-how." But it is obvious that now the situation is completely different. As a result, Seoul accepted all the conditions for Lockheed Martin for the “invisible” F-35. At the second stage, even the tender was not held. This means that the American company feels free from the threats of competitors. And the preliminary agreement on the "possibility of technology transfer" does not mean that the Koreans will receive the full development of the "stealth". The words can be interpreted quite differently, and Lockheed Martin, which brings the F-35 “to the mind” with great screech, is not interested in creating potential competitors. But in Seoul they are clearly hoping for a concern from the United States, making it clear that the “Korean invisible man” will look like F-35.

Another problem is the expediency of creating a fifth-generation fighter, when you can “just buy it”. Here we must assume, because the car may end up being not so perfect, but at the same time extremely expensive. In 2003 and 2007, two influential Korean institutes - the Korean Research Institute for Defense Studies (KIDA) and the Korean Development Institute (KDI) have already passed their verdict: South Korea’s creation of its own next-generation aircraft is unreasonable for a number of factors (economic, technical, military and others). The truth is, in 2009, another institute voiced a different opinion, which can be summarized as “worth trying”. It is evident that South Korea really wants this, since the program has been launched. The basis of this approach is a very sound policy for the development of its defense-industrial complex and access to arms exports, but this is far from being in all directions.

Again and again the question arises about the lack of key technologies in South Korea. The last known study by the Korean research institute KISTEP showed the following: if the source of such technologies does not appear, or it will be too expensive, then KF-X as a project loses its meaning. The Koreans themselves, it seems, cannot create technology "stealth". Talk only in the style of "from whom to buy?"

Obviously, there are a lot of ambiguities about the new fighter.

South Korean generals could not even clearly answer the key question of journalists about how many engines the future invisible fighter would have - one or two? The answer was: "We will decide later, taking into account the general situation and other factors."

The question of the potential high cost of the project is not removed. Now the total cost of development and creation is estimated at 9 billions of dollars, but many experts are confident that the figure will be much more solid. The plane can even become not "golden", but "diamond", without justifying as a result of investments.

For the first time, South Korea announced its plans to build its own fighter of a new generation in April 1999. Under President Kim Dae-jung, it was announced that it would implement these plans. Then it was promised that "Korea will receive its own aircraft already in 2015." Obviously, this promise remains only in words. Between 2003 and 2012 The KF-X - Porame project was evaluated five times. In 2010, the consent of Indonesia to participate in the future international consortium was obtained. 22 November 2013. At the meeting of the Joint Chiefs of Staff of the South Korean Armed Forces, it was decided to start work on the project with 2014.

Ctrl Enter
Noticed oshЫbku Highlight text and press. Ctrl + Enter
We are
New photos of the Chinese fighter Chengdu J-20
34 comments
Information
Dear reader, to leave comments on the publication, you must to register.