Armata should return to the unitary shell 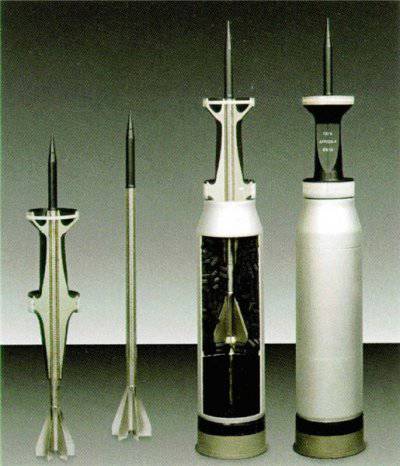 In numerous publications on promising tank "Armata" strangely avoids the question of the type of shot of the future tank. The author back in 2006 (NVO, 2006, No. 18) expressed the opinion that the decision adopted in 1962 to transfer the new 125-mm tank gun to separate shell loading was erroneous. It led to a decrease in rate of fire, a decrease in crew safety, and a significant complication of the design of the autoloader. None of the world's tank manufacturers have taken this path. All retained unitary loading.


The first domestic T-62 tank with a smooth-bore gun (115-mm gun 2А20 / У5-TS "Molot") had a unit of ammunition from unitary cartridges. Its chief designer Leonid Kartsev remained a staunch supporter of unitary loading. In 1961, the developer of the gun OKB-9 (Yekaterinburg) defended the idea of ​​a separate shot. Leonid Kartsev sharply objected to this and insisted on the use of a unitary cartridge. The idea of ​​OKB-9 was supported by a representative of SRI-24 (now THEM). However, there was a sharp disagreement on the issue at NII-24.

The main idea of ​​supporters of separate-sleeve loading was that splitting the shot into two short parts would allow using a fundamentally new carousel scheme of the automatic loader with its location on the floor of the tank and the location of the parts of the shot over each other. It was assumed that the ammunition set hidden in the depth of the tank would be reliably protected from the effects of enemy fire. These hopes were not justified in the future.

It should immediately be noted that the idea of ​​placing the ammunition or its main part in the same compartment with the crew always seemed to be sharply debated.

DID NOT foresee the main

The main mistake was in the other. Proponents of separate loading could not foresee the development trend of armor-piercing feathered sub-caliber shells (BOPS), consisting in the continuous increase in their length. Over the years, the length of the BOPS has grown steadily. At present, the Abrams М1А2 120-mm tank shot М829А3 with a projectile length 924 mm has been adopted in the USA. Its armor-piercing core made of alloy using depleted uranium has a ratio of length to diameter 37. The shot is considered one of the most effective shots with BOPS.

In domestic tank shells, stabilization with large-span nadkalibernymi feathers, which fall out after the departure of the projectile from the bore, is used. This is due to the need to remove feathers beyond the boundaries of the bottom perturbed zone. This significantly increases the aerodynamic resistance to the movement of the projectile. With a large projectile length, on the one hand, it is possible to create a conical transitional compartment from the body to the stabilizer tube, and on the other hand, to bring the feathers into the unperturbed zone, which will reduce their span and, as a result, reduce the aerodynamic resistance to the movement of the projectile. This scheme is implemented in the construction of 120-mm fragmentation-cumulative anti-helicopter tank projectile M830A1 USA.

Along with the above, there are a number of advantages:
- due to the transition from a push-pull charging circuit to a single-stroke one, the duration of the loading cycle is reduced (by approximately 1,5 seconds);
- provides a fixed mutual position of the projectile and the powder charge when loading, including when the barrel is worn out, which eliminates the scatter of the conditions of charge combustion at the initial moment of the shot. At the same time, it should be noted that supporters of separate loading believe that a more significant factor in this loading is the constancy of the “biting” of the projectile in the input cone of the barrel, ensuring the stability of its initial speed;
- it is possible to extract the projectile from the barrel in case of failure or cancellation of the shot. When loading separately, discharging can be performed only by a shot, which is not always permissible under the conditions of the combat situation;
- for promising high-explosive shells with a bottom trajectory fuse, it is possible to contact the temporary installation into the fuse after loading and closing the shutter along the path: electrical contact of the shutter - electrical contact of the bottom of the sleeve - cable along the axis of the sleeve - bottom fuse. The scheme is protected by MGTU patent number 2 368 861 "Ostashkov" and implemented in the 120-mm tank fragmentation-beam shells DM11 (the company "Rheinmetall" Germany).

The main objections to the unitary tank cartridge are associated with its long length, which makes it difficult to operate with it in a close fighting compartment, and an unacceptably large mass of a unitary shot. As we saw earlier, with modern long BOPS, the length of the shot only slightly (by 6%) exceeds the length of BOPS. It turns out to be insignificant and the second objection. Here are the mass characteristics of regular 125-mm separate-cartridge shots:
fragmentation-beam projectile 3VOF22 - weight 33,0 kg;
cumulative projectile 3BBK73 - 28,5 kg;
Armored piercing pierced piercing projectile 3BBM13 - 20,4 kg.
The mass of a heavier unitary shot with a high-explosive fragmentation projectile is 33 – 35 kg, which does not exceed the allowable load for manual operations with a shot.

In general, the expediency of the transition (return) of domestic tank guns to a unitary cartridge seems quite obvious. Today, the only serious argument in favor of the principle of maintaining separate loading is the possibility of switching to the caliber 140 mm. Development is underway in all countries (XM291ATAC, USA; NPzK-140, Germany; L55 “Bagheera”, Ukraine, etc.). When switching to this caliber, the mass of the shot with the RP-projectile will be 33 (140 / 25) ^ 3 = 46,3 kg and the transition to separate loading will become almost inevitable. We give the characteristics of 140-mm tank gun L55 "Bagheera":
- Maximum pressure in the barrel - 564 MPa
- muzzle velocity - 1870 m / s
- flight weight BOPS - 7 kg
- muzzle kinetic energy - 15,7 MJ.
The gun is supposed to be mounted on the T-84 “Oplot” tank.

The transition to a unitary cartridge almost uniquely determines the placement of the automatic loader in the aft compartment (chase) of the turret, that is, exactly what is used in most modern foreign tanks. Currently, the turret-mounted automatic loader is used in Leclerc tanks (France), Tip-90 (Japan), K-2 Black Panther (South Korea). The machine is also used in an experienced Ukrainian tank "Yatagan". In all cases, a scheme with a closed belt-type conveyor located across the axis of the tower is used.

In the Leclerc tank, equipped with a 120-mm smoothbore CN120-26 gun of 52 caliber length, the ammunition kit contains 40 unitary cartridges, of which 22 are in the automatic loader tower, 18 - in a rotating drum located in the case to the right of the mechanic-loader, As shots are used up in the machine gunner can replenish it from the drum. Automation is able to provide a technical rate of fire (excluding aiming and aiming) up to 15 rounds per minute, which gives the 10 – 12 effective rate of fire per minute both from the spot and in motion.

It should be noted that stacking shots in the pursuit of the tower can be applied to tanks that do not have an automatic loader. In the Abrams tank М1А1, USA, the laying of shots (34 units) is separated from the crew compartment by a mobile armored partition.

The main disadvantage of the machine in the pursuit of the tower is its increased vulnerability. The aft compartment is poorly armored, so when small-caliber shells hit it, large fragments and even large-caliber armor-piercing bullets can cause ignition and explosion of ammunition. To protect against the effects of the feed compartment is equipped with expelling panels that ensure the release of burning ammunition outside. As a result of the wars in the Persian Gulf and in other places, cases of explosions of ammunition in the feeding areas of the Abrams tank are described. In all cases, the crew was not injured.

When deciding on the choice of the type of machine, it should be noted that in recent years there has been a significant reassessment of the merits of the floor-carousel machine adopted in domestic tanks. He was far from being as safe as it seemed to his author. Revealed at least three real possibilities of ignition ammunition:
- defeat of the side of the tank with a cumulative RPG grenade. In regional conflicts in urban combat, the enemy, who knew the tank design well, fired an RPG-7 hand-held grenade launcher on its board into the area of ​​the carousel, as far as possible into the space between the rollers. The cumulative jet penetrating through the relatively thin side armor easily ignited the burning shells, which led to the catastrophic death of the tank with the crew;
- penetration of the bottom of the tank from the bottom when hitting a cumulative antidischestvennoy engineering mine;
- breaking through the relatively thin roof of the tank with the shock core of the sub-equipment of a SADARM type cluster artillery projectile or a cumulative jet of a XM120 X-mm 943 tank shell with a vertical jet penetration into the fighting compartment down to the tank floor.

It is clear that the conversion of a huge number of T-72, T-80, T-90 tanks to a unitary cartridge and a new automatic loader is unrealistic. Need a bold decision. It will consist in the fact that with a unitary patron only the Armata tank will be produced. Thus, it will be necessary to allow the simultaneous existence of two different competitive types of tank shots. In the end, life itself will put tough assessments of these species. At the same time, the new capabilities of this tank will become clear.

Personally, I have no doubt that a unitary cartridge will win. Its benefits are too great. The convergence of technical solutions is an objective and unavoidable process. The laws of physics are the same all over the world. The decision on separate loading was wrong. It would sooner or later lead to a dead end.

Ctrl Enter
Noticed oshЫbku Highlight text and press. Ctrl + Enter
We are
Armata: a chance to fix a long-term mistakeState tests of the tank "Armata" just around the corner
37 comments
Information
Dear reader, to leave comments on the publication, you must to register.