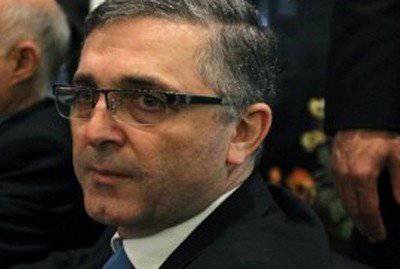 23 November, terrorists attempted to assassinate Minister of State for National Reconciliation Ali Haidar. On the highway between the village of Cadmus in the province of Tartus and the city of Masyaf in the province of Hama, terrorists opened fire on his car. The minister himself was not injured, but his driver died.


Ali Haydar - Minister of the opposition bloc "Popular Front for Change and Liberation." And the very presence of a representative of a moderate, patriotic opposition in the Syrian government completely refutes all speculations of the West and puppet regimes in the Arab world that supposedly there is no democracy in the country. After trying to instill the world community, the militants set about weapon because it is impossible to fight with political methods. But Ali Haydar last spring took part in the parliamentary elections. Unfortunately, it cost his son his life, because the terrorists tried to intimidate the politician and went to such a heinous murder. But Haydar won and then was invited to the government as an opposition representative.

And now another crime has been committed against someone who, by his example, has proved that it is possible, and not necessarily wishing to change, to fight with political methods in Syria to take up arms.

As stated by the Popular Front for Change and Liberation, the attempt was made at the time when preparations are underway for the Geneva-2 conference. This crime is aimed at disrupting the conference.

In an interview with Syrian television, Ali Haydar said that the terrorists wanted him to give up his political activities, but he was ready to do his duty even if it cost him his life. “Today we have thousands of dead, but the country is going through an important moment that could be a turning point. We are on the path of a political way out of the crisis. All attempts at attempts are being made to thwart this process,” the minister stressed.

He expressed his condolences to the family of the deceased driver, saying that this man named Omran had been fulfilling his duties for a year, and earlier, when they were in a dangerous situation in the Deir-Atya city between Damascus and Homs, the driver saved the life policy.

It should be noted that this is not the first crime against Syrian political figures. Thus, in early November, the People’s Council deputy from the province of Deir ez-Zor, Majchem Al-Saho, was abducted by gangsters in early November and then brutally murdered. According to preliminary data, the atrocity was committed by an organization called the Islamic State of Iraq and the Levant, linked to al-Qaeda.

Syrian President Bashar Al-Assad signed a decree that the election of a new deputy from the province of Deir ez-Zor will be held on January 7 of 2014.
In addition to the attacks on politicians, terrorists continue to commit crimes against civilians and infrastructure. 23 November was fired from a mortar at an oil refinery in the city of Homs. The projectile landed in a fuel tank, which resulted in a large fire. One person suffered.

The next day, the plant was visited by Governor of Homs Talal Al-Barazi. He said that the authorities would provide the enterprise with all the necessary assistance in repairing the damage. In addition, the Governor praised the efforts of firefighters who eliminated the fire, and other employees who, in spite of everything, continue to fulfill their duty.

On November 24, several shells were fired at the Ash-Shagur residential area, Al-Adawi motorway, at the market in the Zaplatani area. Four people were injured.

In the province of Damascus in the city of Duma, the building of the Construction Directorate was shelled and one of the employees was injured. In the city of Harasta, terrorists fired a shell at a police hospital, where one person was also injured.

But no crime of terrorists can force honest people to go to work, to keep their watch - whether it is a worker or a minister, a soldier or a president. And this is the secret of Syria’s resilience in the face of a conspiracy of superior forces.

Ctrl Enter
Noticed oshЫbku Highlight text and press. Ctrl + Enter
We are
Two faces of patriotic BelarusSyria: Americans scare themselves, and Asma Asad buys chairs
6 comments
Information
Dear reader, to leave comments on the publication, you must to register.