Will Moscow be able to replace Washington with Egypt as a key partner?

November 25 2013
30
On November 14, a landmark meeting took place in Cairo between Russian and Egyptian ministers, namely, between the foreign ministers and the heads of military departments. On the part of Russia, Sergei Lavrov and Sergei Shoigu were present at the talks, and on the part of Egypt, their colleagues Nabil Fahmi and Abdel Fattah al-Sissi. Meetings of this format in stories Russian-Egyptian relations have never been carried out; in addition, the event was remarkable due to the fact that Cairo openly admitted its desire to bring relations with Moscow to a qualitatively new level. The same as in the era of Gamal Abdel Nasser. Does this mean that Egypt is disappointed in the United States? Do we need a new ally in the Middle East? 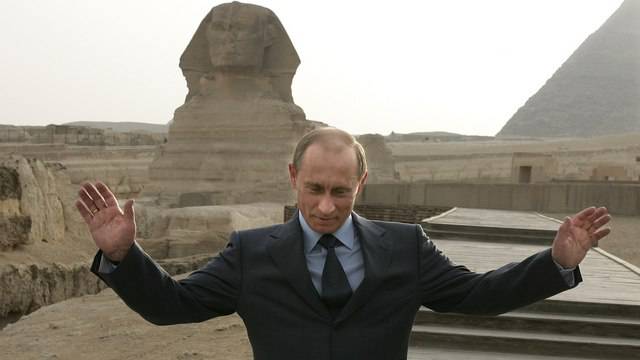 The chaotic connection of Cairo

The current interim president of Egypt, Adly Mansur, is a protege of the military, a puppet of a narrow circle of generals and high-ranking military officials. Despite the legal education, the new formal head of the country expresses exclusively the interests of the military elite and adheres to the “road map” drawn up by it. Adli Mansur - successor to Mohammed Hussein Tantawi and Abdul Fatah Khalil al-Sisi, chairmen of the Supreme Council of the Armed Forces. Thus, in order to have an idea of ​​the Egyptian foreign policy vector after the July coup and the resignation of Mohammed Mursi, it is necessary to carefully study what the AFWC sought, what role he assigned to the state on the world stage and who he saw as his main foreign allies and opponents.

The resignation of Hosni Mubarak under pressure from the military caused confusion in the diplomatic departments of many countries, primarily the United States: of course, Washington has long been preparing for the fact that Mubarak will leave, and even after the start of the protests, he knew when this could happen. Probably, the United States assumed that the military would take control of the situation in the country, but, surprisingly, Obama was at a loss after the February coup took place. The same can be said about France and Britain: The West has become accustomed to the fact that “democratic” coups usually take place in countries with weakened armed forces, “neutral”, disinterested in participating in politics, such as Serbia, Kyrgyzstan, Georgia or Ukraine . Egypt is a completely different case: it was foolish not to take into account the power and political activity of the army, hoping that some next pro-Western creature would come to power, and the military in the name of the principles of moralism would remain neutral, contemplating the destruction of the country. Yes, that was after the 2012 presidential election of the year, when the Armed Forces tried to play democracy. But this game did not bring any positive results, the generals quickly came to their senses and overthrew the newly appeared "people's" president.

The Western world tried to put pressure on the Egyptian military in order for the revolution to return to the framework of the pattern familiar to Euro-Atlantic observers. The upheaval in 2011, and even more so the re-coup of 2013, does not at all correspond to the ideas of Western countries about how exactly the "people's democratic" revolution should be accomplished. And if for the first time, before the constitutional referendum and the presidential elections, the United States and Europe swallowed a bitter pill, believing that the coup was just a temporary deviation and didn’t put too much pressure on the Supreme Council of the Armed Forces, then after July 2013 realized that Western diplomacy the main obstacle in the implementation of the Middle East plans of Washington and Brussels, in connection with which it launched an offensive against Cairo. What we are seeing now: in October, shortly before the Russian-Egyptian negotiations, Barack Obama threatened that he would reduce the amount of financial assistance to Egypt by a quarter.

The Egyptian military, in turn, during the rule of the Supreme Council of the Armed Forces, pursued a policy of balancing, as did Hosni Mubarak, trying not to enter into confrontation with major global and regional players. Of course, because of the erratic diplomatic ties, the Switzerland of the Middle East from Egypt did not work. By inertia, the Egyptian military rulers, imitating Mubarak, flirted with the White House and tried to maintain a more or less acceptable relationship with America. In particular, in order to smooth out the blame for the diplomatic conflict with Israel, Cairo recognized the PNS as the only legitimate authority of Libya, and also one of the first to support the declaration of independence of South Sudan.

But Egypt did not cooperate only with the United States: at this time, Iran’s military ships for the first time since 1979 have been able to take advantage of the Suez Canal to go to the Mediterranean. This became a sensation: they started talking about a sharp change in the foreign policy of Egypt, although, as mentioned above, Cairo still hoped to maintain good relations with all the major players in the region, with the exception, perhaps, of Israel. Washington was probably embarrassed by such harsh diplomatic attacks: recognition of the PNS of Libya, negotiations on loans with the monarchies of the Persian Gulf, gestures of friendliness to Iran, confrontation with Israel and allegations of conservatism in foreign policy caused cognitive dissonance from American diplomats. Trying to maintain neutrality, the Supreme Council of the Armed Forces in the eyes of Washington and Brussels acted highly illogically, which was probably the result of internal contradictions.

As for Russia, the Egyptian military recognized its influence in the Middle East, but did not rush to enter into negotiations and preferred an alliance with hostile Gulf monarchies, which at that time were satisfied with the humiliation of Egypt, and also sought to make it puppet Er -Riyadh, Doha, Manama.

Cairo, in turn, does not want to obey the dictates of its eastern neighbors. This explains the July coup of the current year. Finally, the confusion and vacillation in foreign policy ceased, and it became clear to the military who it was who. In a situation where the US is putting pressure on Cairo more and more, and all imaginary friends want to snatch a tasty morsel from Egypt, the country's leadership has no choice but to look for new allies who did not have time to blacken themselves. Or seek help from those countries that will help Cairo to arouse Washington’s jealousy on the principle “I will show him that there are other guys.”

In both cases, Russia is ideally suited to Adley Mansur’s political intrigues and military. Based on the November 14 ministerial meeting, it’s hard to say whether Egypt is counting on long-term cooperation or just wants to show the US its foreign policy independence in the hope that the US allies will try to regain Cairo’s loyalty by bribing.

But, as it became known, the negotiators decided to hold joint military exercises, as well as to rebuild Egypt’s power supply facilities, which suggests that the second option is likely to be untenable, and Cairo wants to derive the greatest benefit from cooperation with Moscow True, politicians have not yet moved from words to deeds, and there have been no official reports about the training of engineers or the military for shipment to Egypt.

Is Egypt an alternative to Syria?

What will Russia get if Egypt becomes its ally? First of all, a naval base in the Mediterranean Sea with the possibility of access to the Indian Ocean. This base will become a reserve base and will replace Tartus if it is in the hands of the Islamists. Back in 2010, the Ministry of Defense stated that the fleet Russia needs bases in Libyan Tripoli and Socotra in Yemen, but the so-called Arab Spring has prevented the implementation of these plans. However, the Ministry did not abandon the idea of ​​increasing the Russian naval presence in the western Indian Ocean, and perhaps Egypt is considered as one of the permanent or temporary base of the fleet.

Some Russian publications, such as Nezavisimaya Gazeta, were quick to suggest that Saudi Arabia and its partners gave up Egypt to Russia in exchange for Syria. It is not known whether this is true, but the Gulf monarchies have already repeatedly demonstrated their duplicity and incompetence to both Moscow and other major regional players. As for Syria, on November 16, two days after the ministerial meeting, a telephone conversation took place between Vladimir Putin and Adly Mansur. During the conversation, the struggle between Bashar al-Assad and Islamism was discussed. A little earlier, Abdel Fattah al-Sissi, head of the Egyptian Ministry of Defense, expressed his readiness to cooperate with the Russian Ministry in matters of counter-terrorism. Thus, Cairo regards Moscow as a reliable ally in the confrontation with the Islamists of the Sinai Peninsula, as well as with the internal Islamist opposition. The Egyptian military expects that in the event of a rebellion by the fundamentalists, Russia will provide Egypt with exactly the same help as Syria, so that the generals will have chances to defend the country. It is foolish to expect such support from Washington: in the course of the Arab spring, the United States has never stood up in defense of the secular regime, and, as practice has shown, in all cases stand on the side of the Islamists.

The only condition that Russia needs to fulfill in order to dominate Egypt is to increase the presence of its fleet in the Mediterranean, and also to guarantee Cairo protection from Israel. But it is not yet known whether our diplomats and the military consider the possibility of including Egypt in the sphere of influence of Russia real. Accordingly, it is too early to talk about some far-reaching plans, especially the next elections of the president of Egypt can end with anything.

Ctrl Enter
Noticed oshЫbku Highlight text and press. Ctrl + Enter
We are
Egyptian Air Force after 2020: “surprise” from the dark horse of the “Arabian coalition”Ban flights to Egypt. What happened to the plane and what awaits the Russian tourist business?
30 comments
Information
Dear reader, to leave comments on the publication, you must to register.