Ministry of Emergency Situations: report on the causes of flood in the Far East 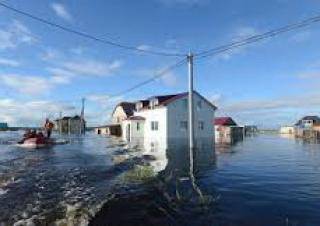 This year, the share of employees of the Ministry of Emergency Situations fell one of the most serious tests for the whole history the existence of this department after the collapse of the USSR. We are talking about the Far Eastern flood, when the big water for several months did not leave a number of regions of the Far East and the Amur region. The Amur region and Khabarovsk, the Jewish Autonomous Region and the Magadan region became flood zones, in which people lost not only their shelter, but also all households, someone was deprived of their means of livelihood. People who recently received a fire MOE license, it remained to abandon its business, as the big water swept away everything in its path, and what remained was turned into half-rotten ruins.
The official reason for such a large-scale flooding in the Far East is the abnormal processes in the circulation of air masses over the region. Due to the emergence of a powerful blocking atmospheric “wall”, cyclones lingered for a long time in the region, which led to the fallout of an extremely large amount of precipitation, which many rivers and other reservoirs of the region took out of their banks.
In the course of the flood, a record rise was made for Cupid. For example, at the peak of the flood, Amur waters in the Khabarovsk Territory rose to the 910 mark. At the same time, the region was saved from further flooding by the fact that the main flood wave hit the Pacific Ocean and a large natural discharge of water into the Tatar Strait occurred.
According to official figures, 105 people have become victims of the flood. At the same time thousands of households are flooded, tens of thousands of hectares of farmland are washed away along with the products grown on it.
It should be noted that a large flood in the 2013 year "noted" not only in the Far East of the Russian Federation. The northern provinces of China and Mongolia were seriously affected. Large-scale flood this year was in Pakistan, India and even Afghanistan. In Afghanistan alone, more than 80 people died from floods. The flood that killed a 205 man has manifested itself in the US state of Colorado.
Until now, in the Far East, EMERCOM employees are working to overcome the consequences of flooding in an entire region. Fighters of the Ministry of Emergency Situations help local residents to dry houses, restore infrastructural objects. A lot of work has been done, more work needs to be done.
Ctrl Enter
Noticed oshЫbku Highlight text and press. Ctrl + Enter
We are
Military involvement in flood relief