November 25 2013
39
The rapid development of information technology imposes its imprint on the development of almost all sectors of the economy and production. Particular attention is paid to the possibility of using IT achievements in military technology and new weapons. As analysts' conclusions show, it is almost impossible to create promising high-performance weapons without new information technologies.


The most promising in terms of new threats is to provide new weapons countering the entire spectrum of terrorist manifestations. Military analysts argue that in the diverse arsenal of this promising weapon in the near future will take the main place of high-precision weapons of small calibers based on IT.

The rationale for the need to implement such a concept is the experience of recent antiterrorist operations, when using powerful large-caliber weapons killed not only militants but also civilians. It must be borne in mind that the accidental death of civilians during anti-terrorist operations has a significant effect on the political situation in the region of the conduct of hostilities. In addition, the conduct of hostilities in populated areas also imposes special requirements on firing to kill, when it is not possible to visually observe the actions of the enemy in the line of sight.

It is this factor that practically nullifies the possibility of using modern weapons with a laser guidance system in urban conditions, which today has been widely developed in all armies of the world. The widely used weapons systems with laser illumination necessarily require the nomination of an observer with a laser target designator at a distance of direct visibility of the enemy. The experience of hostilities suggests that such a nomination of an observer in urban environments is very difficult. As the statistics show, up to 80-90% of all battles in the conduct of hostilities with terrorist groups, are carried out in settlements.

Another crucial factor in warfare is the time factor. Today, to defeat the enemy at a distance of 15 km means aviation and bombing strikes need at least 40 minutes from the moment the target is detected. This is an obvious waste of time for departure, flight time and orientation over the target. During this time, the militant could well have committed a terrorist attack and disappeared from the scene of the crime.

The developed concept provides for the defeat of the target within 1-3 minutes from the time of the decision to lose. When implementing this concept, you need a low-power weapon with a radius of solid destruction of 5-8 meters.

The “Black Woodpecker” high-precision shotgun belongs to the class of light precision weapons. The starting system of the complex is a single use product. 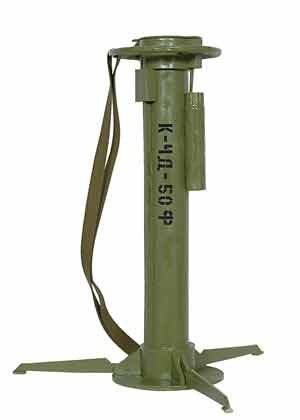 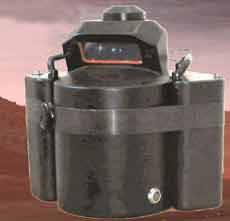 The Black Woodpecker complex is designed for use in troops to hit particularly important point targets (target armor, command posts, vehicles, concentration zones for small groups of enemy personnel, etc.). A special place may be occupied by the use of this product in the protection of roadblocks, the protection of zones and ways to promote illegal caravan routes in remote mountainous areas. According to the developers, the use of the product “Black Woodpecker” can be very effective in combination with autonomous video surveillance tools that transmit an image of the situation in the zone of the expected location of the enemy. Such products of the MUGI type are known and used by the Israeli army. The most effective is the use of the product when conducting special operations for covert destruction of a target without conducting constant visual observation of it. The product can be used as intended in the rapid reaction forces and special units to combat terrorist groups to defeat particularly important point targets.

Control of the complex is remote at a distance of about 15 km (in some cases up to 300 km or more) and excludes the presence of the operator in its deployment zone, including in the territory of the enemy. 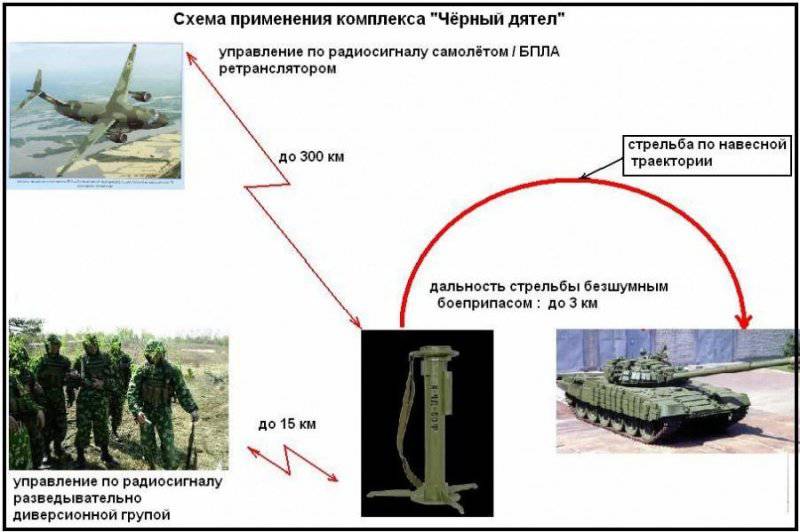 The defeat of the target is realized along the hinged trajectory with its correction in the passive section. The indication of the point of destruction of the target is made by the operator manually or automatically according to the image of the battlefield in the target zone covered by the ammunition chamber and displayed on the display screen of the control unit.

The launch canister is made in the form of a sealed, smooth barrel, which rests in a combat position on a transformable support plate.
The control panel is designed as a portable small-sized case (such as a laptop) with a unit for providing coded radio communication over a closed channel and has an LCD display and shot control elements. The control panel can be used to carry out any number of shots from different launch containers of the same series with different types of ammunition. In the controlled area can be simultaneously installed the required number of launch containers. The installation map of the complexes can be in the memory of the control panel and can be displayed on the display screen for.

Determination and bringing into battle of the corresponding container for firing a shot from it is made by means of an individual key. Pre-key is removed from the corresponding container after it is installed in a combat position, stored by the operator and inserted, if necessary, into the socket of the control panel. The key is made with a built-in microcircuit, which, when installed in the socket of the control panel, adjusts the required range and mode of radio exchange.

The ammunition has a built-in full-color video camera in the nose of the warhead. The camcorder of the ammunition operates in the visible and IF range with image transmission to the control unit via a secure radio channel. To improve the accuracy of aiming, during the entire time of the flight of the ammunition to the target zone and to view the image on the display screen and adjust the guidance, the effect of "freeze frame" is used.

The image of the ammunition camcorder — displayed on the operator’s control panel: 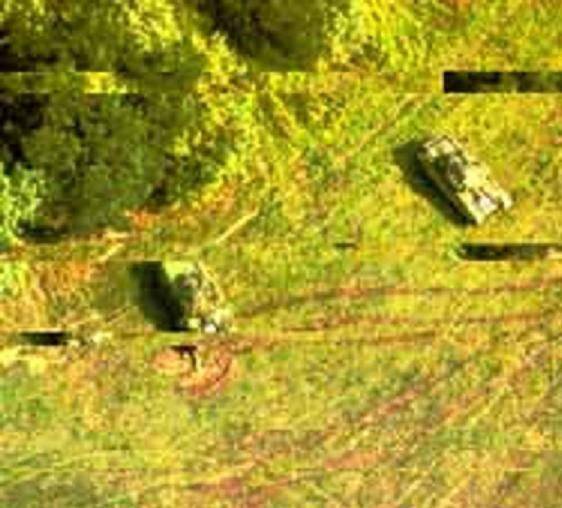 A feature of the installation is the ability to correct the aiming point after the shot based on the image of the battlefield in real time. The electronic system of the control unit has the possibility of increasing the image of the zone of probable hitting against the background of the full image of the field of the reachable lesion zone (the falcon eye effect).

The container with the shot is autonomous and airtight. The container is filled with gaseous nitrogen. Gas pressure is also used to remove the lid of the container, clean the bore and drop a possible masking soil when the complex is brought into service. The shot can be carried out remotely and covertly. The control is performed by all training and shooting operations on a secure radio channel. 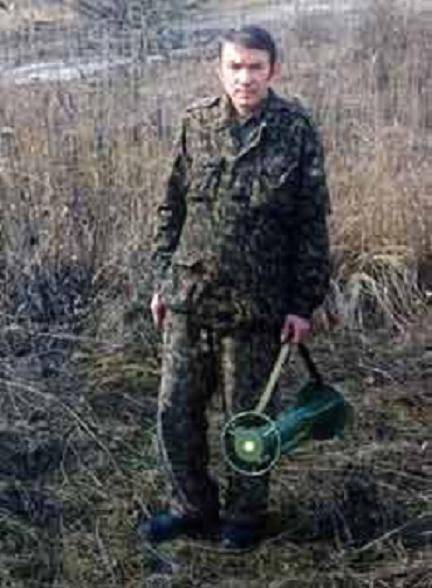 Due to the special design of the container, the sound of a shot is not audible at a distance of several meters, which ensures high secrecy of combat use and the suddenness of hitting the target.

The Black Woodpecker complex was tested under the conditions of a landfill at a distance to the target 1800 meters. The tests have shown its high efficiency. 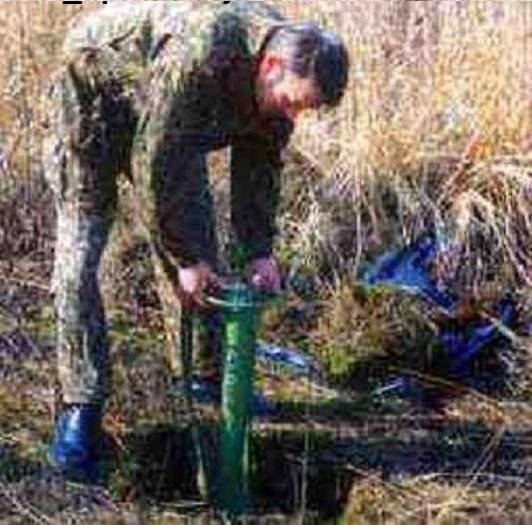 With the further development of the “Black Woodpecker” product concept, for its production in Ukraine, the possibility of carrying out mines for 82-mm and 130-mm mortars according to this scheme was considered. Conceptually it is possible to create such products. In this version, "obsolete" weapons can be transferred to the category of precision weapons.

A variant of the use of a mortar to destroy enemy armored vehicles from a previously prepared (and disguised) position: 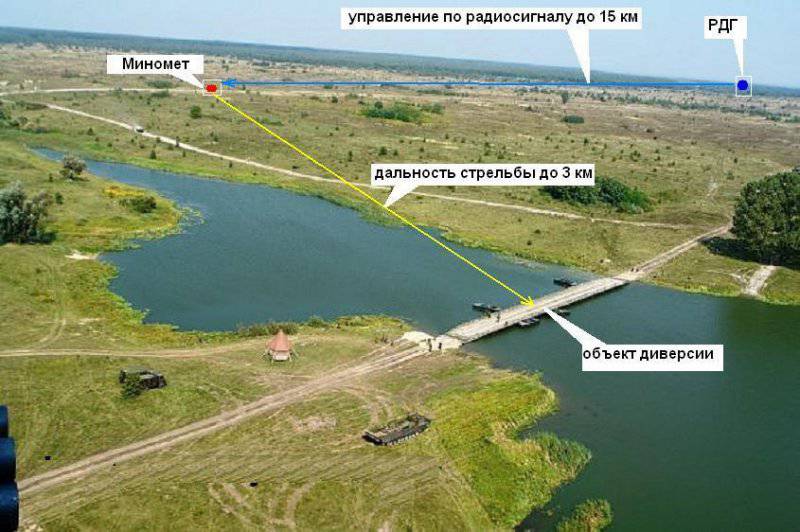 The electronic stuffing of the navigation part of the control unit uses the SIRF 111 chipset, which allows receiving and processing signals from satellites. The unit is equipped with a microSD port for fast data transfer. The presence of a removable microSD memory card in such equipment allows you to store additional information about the intended region of hostilities. The memory can also store information on the location of cities, towns and roads in such settlements, political borders, rivers, lakes and other information important for the conduct of hostilities.

Option destruction bridge reconnaissance and sabotage group using the complex "Black Woodpecker". In this version of the RDG, there is no need to approach directly to the object of sabotage - to do this, it is enough to install a mortar at a distance of 3 km, and then move to a safe distance - up to 15 km 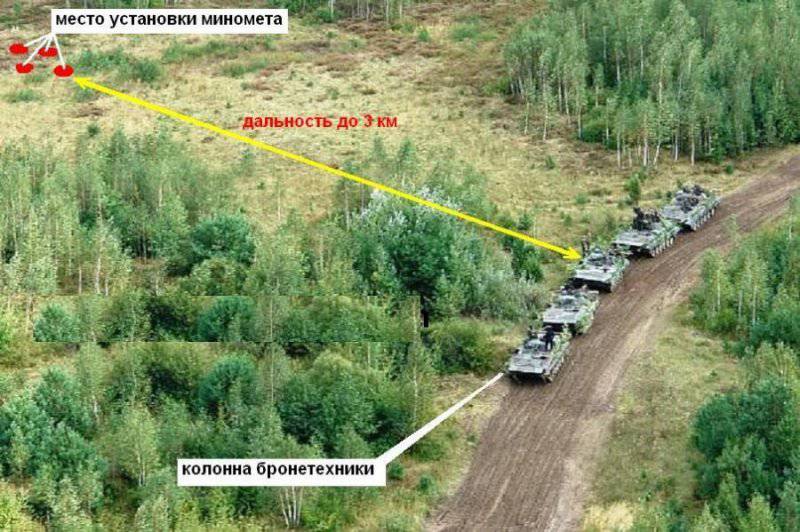 The shot is carried out remotely and silently. The sound of a shot is not audible at a distance of 5-10 meters, which ensures high secrecy of combat use and the suddenness of hitting the target. The lack of a sound of a shot excludes the possibility of warning the enemy about an ongoing attack, which also increases the effectiveness of combat use.

A complete set of the complex with one container is transferred by one or two members of the calculation.

The complex can also be installed secretly in the ground and remain in a waiting state for about a year.

TTH:
Firing range - to 3 km
Mines caliber - 50 mm (option 82-mm, 130-mm is possible)
Type of warhead - fragmentation, cumulative, high-explosive
Control - by radio (control by wire is possible)
Shooting accuracy - 0,4 - 0,6 m
Damage radius - 5-8 m (with fragmentation warhead)
Penetration -120 mm (with a cumulative warhead)
Control range - up to 15 km (from the operator’s console)
- up to 300 km (when using a repeater)
Readiness of the shot,
which is in the ground - up to two years
Audibility of a shot - not audible at a distance of 5-10 meters
The possibility of shooting at night - there are