Kyrgyzstan has handed a note to the American ambassador

November 25 2013
28
At the end of last week from the Kyrgyz Ministry of Defense came the news that the head of the Kyrgyz Defense Ministry informed his Russian counterpart Sergei Shoigu about the presentation of the note to the American side. The note concerns the withdrawal of US military personnel from the Manas base, and, according to Taalaibek Omuraliev, was handed to the American side by the Foreign Ministry of Kyrgyzstan. 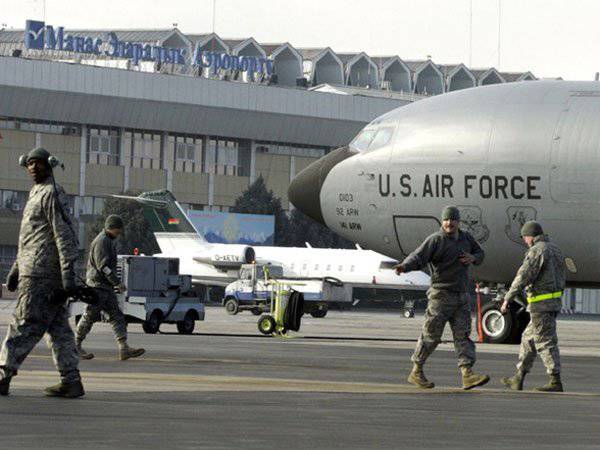 Last Thursday, a personal meeting of Erlan Abdyldaev (Kyrgyz Foreign Minister) with US Ambassador Pamela Spratlen took place in Bishkek. Mrs. Spratlen has been serving as US Ambassador to the Kyrgyz Republic since 15 on April 2011 of the year (she started work even before the current presidency of Kyrgyzstan, Almazbek Atambayev, took office).

Madam Spratlen, of course, accepted the note, but ... How ready are the United States to take and leave Kyrgyzstan like that? - big question. Recently, such a tendency has emerged that if the American military comes somewhere, they remain there seriously and for a long time, and if they leave, then not everything and often close ...

The above-mentioned Taalaibek Omuraliev, despite all the subtleties of American policy, states that the process of leaving the Americans from Manas has allegedly begun, and that the process of transferring objects in the American-rented airport segment has begun. Indeed, Kyrgyz media publish photographs of how American servicemen pack crates and backpacks and are actively going somewhere. But does this mean that the star-striped "partners" are going to leave home exactly?

It is worth recalling that Kyrgyz President Atambayev last summer signed a law on the withdrawal of the American contingent from the Manas base after the almost 12-year-old American presence in Kyrgyzstan. It would seem that all the necessary legal framework was prepared for the Americans to leave the republic: the law, and the presentation of the note. However, it is alarming that something similar has already happened under the previous president. Everyone was also actively talking about the fact that the Americans have no place in Kyrgyzstan, that the presence of a US military base does not meet the interests of the Kyrgyz people. President Bakiyev loudly stated that "another day or two" and the base will be finished (in the legal sense of the word, of course). And in fact, the base was, indeed, “finished” - it was taken and renamed by its light movement of the hand that put the corresponding signatures ... To the Transit Center. And the Americans remained safely in their places.

Is the same trick possible now by the Kyrgyz authorities? There is a probability, and this probability obviously depends not only on the Kyrgyz authorities themselves, but also on how much the Americans want to stay in Kyrgyzstan “not for long”, and what gingerbread is ready to promise official Bishkek for this. After all, if the gingerbread cookies are big and sweet, then the temptation of the new renaming, for example, to some kind of joint “US-Kyrgyz regional security club”, will show itself.

For Russia, by and large, the withdrawal of US troops from Kyrgyzstan is not a matter of principle. Fundamentally different - how much can you trust the Kyrgyz authorities. Simply put, will they throw it? .. After all, it is clear that Kyrgyzstan, for pointing out the door to the Americans, has been promised certain “bonuses” on the part of Russia, and some of these bonuses are already being realized for Kyrgyzstan. This can explain the original report of the Minister of Defense of Kyrgyzstan Omuraliev before the Russian head of the military department, Sergei Shoigu, that "everything is going according to plan." The “report” was heard during the meeting of defense ministers of the CIS states held in Moscow.
By the way, it is not necessary to exclude the fact that the American side can go not according to the “gingerbread” system. The possibility of using a whip in relation to Kyrgyzstan is also not that illusive, especially in light of the world events of recent years. If Washington decides that Bishkek has too actively reoriented itself to Russia, then new provocations in this long-suffering post-Soviet republic cannot be ruled out. The same president, Atambayev, without the support of Russia and other CIS countries, may repeat the fate of his predecessors, who had to leave the presidency not at their own will. In this regard, close contacts of the defense ministries of Kyrgyzstan and Russia are explained. Bishkek unequivocally makes it clear that “in case of something you are already there ... - provide all possible assistance”.

So, if the US military actually leaves Kyrgyzstan before 11 July 2014, then a wave of chaos may well rise in the republic, sponsored by those of the United States, for example. If Bishkek is left alone with provocative groups, as it was more than once recently, then Atambayev’s term will obviously be short. The most amazing thing is that the term of the Kyrgyz president may not be long even if he decides at the last moment to leave the Americans in Manas. The reason is that he has already launched a flywheel, and this pressure is not exactly appealing to Washington.

In general, 2014 is a special year for Kyrgyzstan. One thing is clear that the game has gone too far, and it's time to complete it. Attempts by the Kyrgyz authorities to sit down again on two chairs will not lead to anything good for them. And then, if the choice is made, then you need to finish the job and finally decide on the main allies, and not expect gingerbread from two directions ...

Ctrl Enter
Noticed oshЫbku Highlight text and press. Ctrl + Enter
We are
East Bazaar on the Russian military sitesKyrgyzstan makes demands of Russia and the USA
28 comments
Information
Dear reader, to leave comments on the publication, you must to register.