Gangsters fired on a delegation from Jordan, and a new fake resolution is being prepared in the General Assembly. 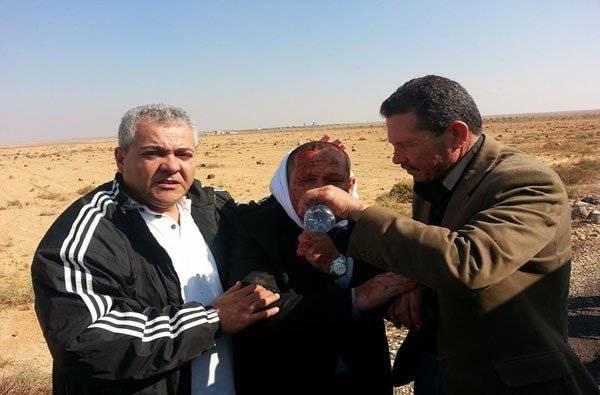 Terrorists in Syria continue to bombard residential buildings with mortars, blow up buses, kill and maim innocent people. Not only Syrians suffer from their actions. The other day, Damascus was visited by a delegation consisting of Jordanian writers, scholars and other members of the intelligentsia. They were received at a high level, met with the vice-president of Syria, with other officials. And this is not the first delegation from other Arab countries, which comes with a friendly visit. Yes, delegations come, despite the fact that many Arab rulers are in the wake of Qatar and Saudi Arabia, that the League of Arab States, controlled by the same medieval but rich monarchies, betrayed Syria, expelled it from its ranks and, together with the West participation in the persecution of the brotherly country. Someone such visits - like a bone in the throat.

And the delegates decided to take revenge. When they are intelligent, mostly gray-haired people, 21 November returned home, in the province of Daraa, near the Syrian-Jordanian border, their bus ran into the "hellish car" laid by the terrorists. Fortunately, there were no dead. But five people, including a woman, were injured.

Apparently, the goal of the terrorists was not only to take revenge on the Jordanians for supporting Syria, but also to intimidate those who want to visit the country and learn the truth about what is happening. But, despite the experience, the guests said that extremists would not be able to break and intimidate the patriots, who from the very beginning expressed solidarity with the Syrian brothers.

In addition, on the same day, six residents of Damascus were injured as a result of gangster attacks on the metropolitan quarters of Rukn-ed-Din, Bab Touma, Al-Kassa, Abbassiin and Masaken Barze. In addition, three people were killed and 25 injured in the city of Homs from similar mortar attacks.

22 November Al-Kassa quarter again became the target of the militants. The hospital was shelled, two people were injured. There are wounded in the city of Jaramana, to which five shells fell that day.

In addition, the Islamists damaged a Christian shrine in Sednaia - the Cherubim monastery, where two citizens were injured.

123 delegations voted in favor. Among them are co-authors of the opus, including Britain, Turkey, Saudi Arabia, Qatar and even Libya, where after the overthrow of Gaddafi, blood is shed daily, prisoners are subjected to barbaric torture, and in Tripoli there are clashes between local and Misrata bandits. But for some reason, those who came to power on NATO bayonets are more concerned about the protection of human rights in Syria.

Against the next biased document, which is based on lies and falsehood, 13 states voted - this is Syria itself, and also Russia, China, Cuba, Venezuela, Nicaragua, Belarus, Zimbabwe, Uzbekistan, Iran, North Korea, Bolivia, Ecuador. 46 countries abstained.

The meeting was addressed by the Permanent Representative of Syria to the UN, Bashar Al-Jafari, who pointed out that the Saudi, Qatari and Turkish regimes are supporting the gangs that kill the Syrians. And the fact that Saudi Arabia was the one who proposed a resolution on human rights in Syria is paradoxical. After all, the authorities of Saudi Arabia are the last side that can talk about such concepts as human rights. Women there can not even leave the house without a man, they are forbidden to drive a car. The country does not know what an election is, its citizens are deprived of elementary political rights. “In Syria, a parliament was created as early as June 1919, and women were represented in it,” Al-Jafari recalled. “And now, after almost 100 years, the regime of Saudi Arabia is trying to teach us the lessons of democracy and human rights,” he said.

In addition, speaking after the vote on the draft fake resolution, the diplomat noted that it is the Saudi and Qatari regimes that are responsible for the supply of toxic substances to terrorists. The same regimes ordered the militants to use chemical weapons in order to accuse the Syrian government.

However, Russia also condemned this scribble. The Russian Foreign Ministry pointed out that this resolution is one-sided, and it does not go in line with the agreements on holding a peace conference "Geneva-2".

Ahead is the UN General Assembly meeting, at which this resolution will also be passed. But who will raise the question of the Syrians, who die every day as a result of the terrorist shelling of peaceful cities? And about the violation of the rights of Jordanians who were injured and mortally at risk only for daring to visit a fraternal country?

Ctrl Enter
Noticed oshЫbku Highlight text and press. Ctrl + Enter
We are
Iran in the Syrian conflict. The confrontation with Saudi Arabia and the interests of the ShiitesSyria: Americans scare themselves, and Asma Asad buys chairs
54 comments
Information
Dear reader, to leave comments on the publication, you must to register.